Most members of the Apiaceae (carrot) family are characterized by having their flowers arranged in umbels, i.e. with segments radiating from a single point.  Formerly, the family was called Umbelliferae.  Many have compound umbels, where an umbel contains multiple inflorescences, each of which is an umbel.  Umbels may be rounded, flat-topped or concentrated in head-like structures.  Most members of the family have white flowers.  Notable exceptions are Fennel, Lomatiums, most Sancicles and Tauschia, which have yellow flowers.   This page shows the Sanicles, some of which resemble Lomatiums.  However, Sanicles usually have smaller, more rounded umbels.

This is one of the first flowers of spring.  It is prostrate, and unmistakeable in the way that the leaves appear to be sunken into the ground.  This is the origin of its species name “arctopoides” which is Greek for “bear’s foot”.  The prickly looking yellow-green leaves are much divided.  Inflorescences are surrounded by long, lanceolate bractlets, giving the flowers a somewhat daisy-like appearance.  The inflorescence seems sessile, but the peduncle lengthens over time, finally up to 21 cm long and surprisingly erect. 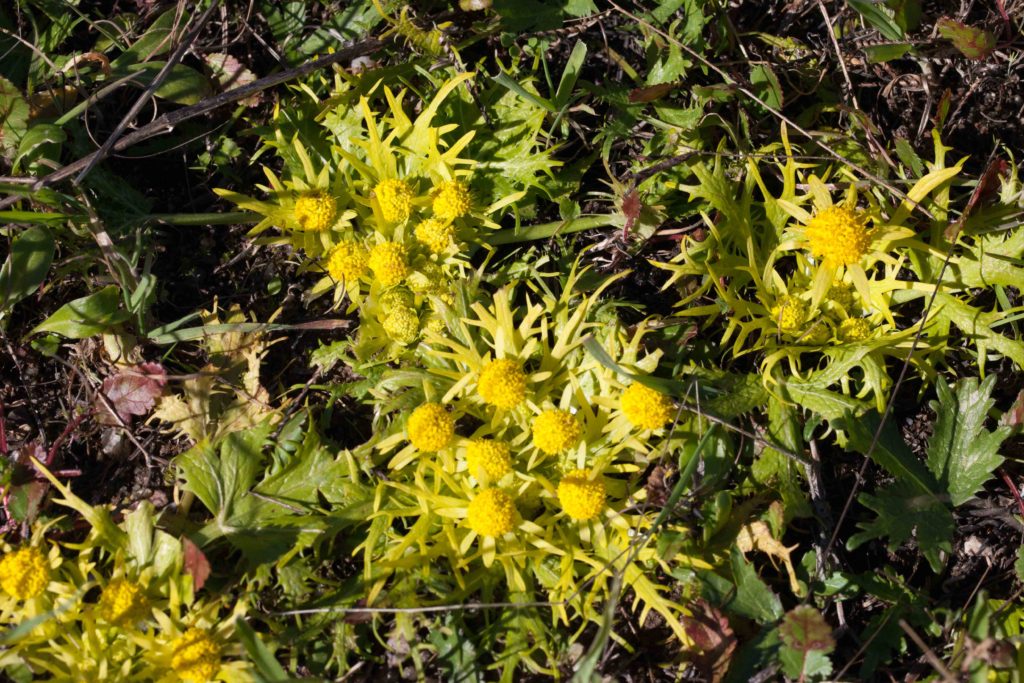 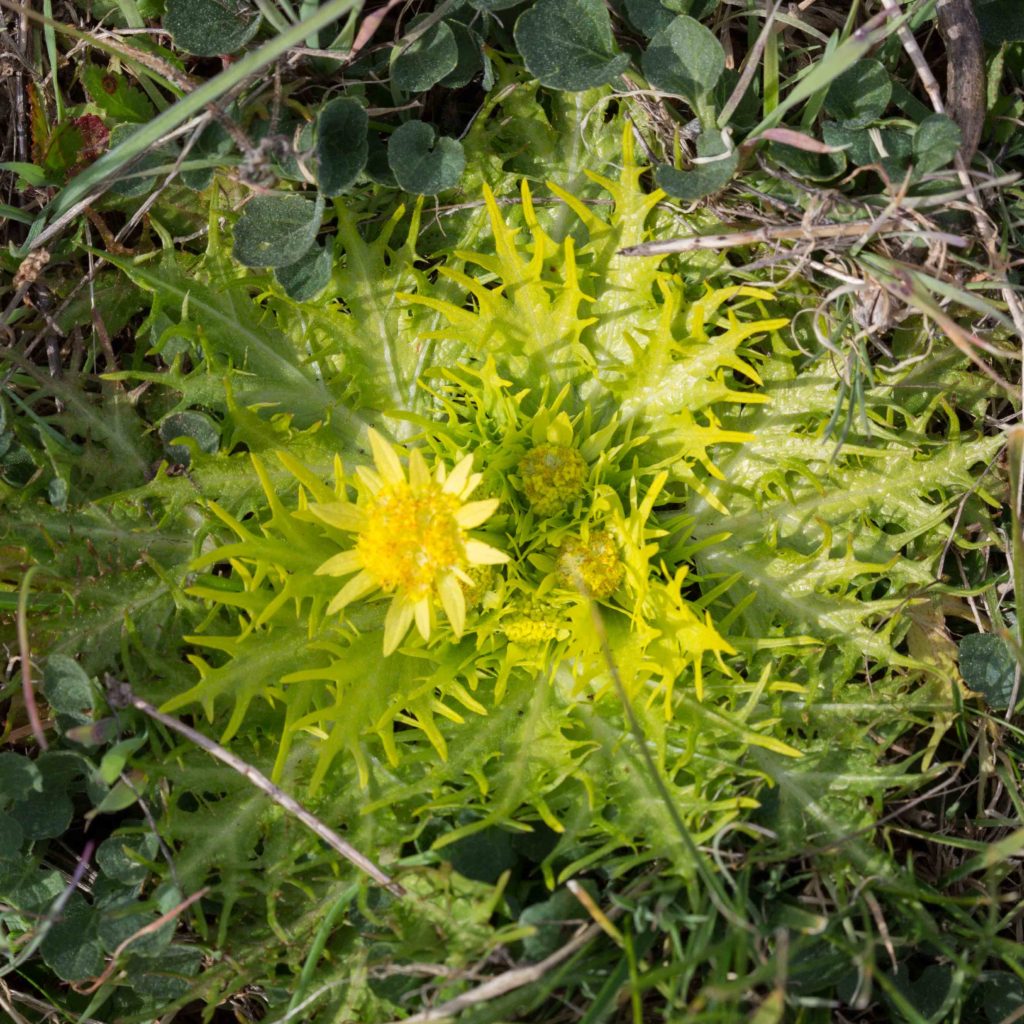 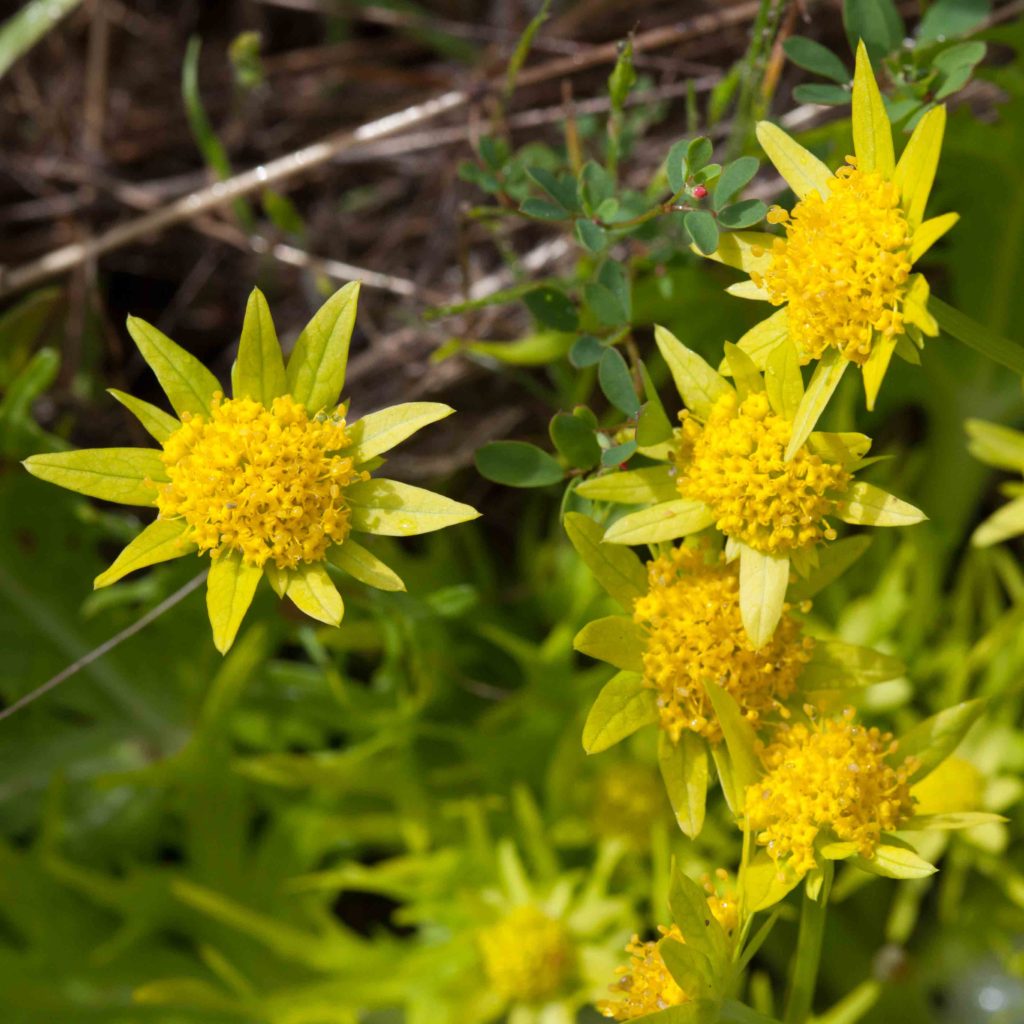 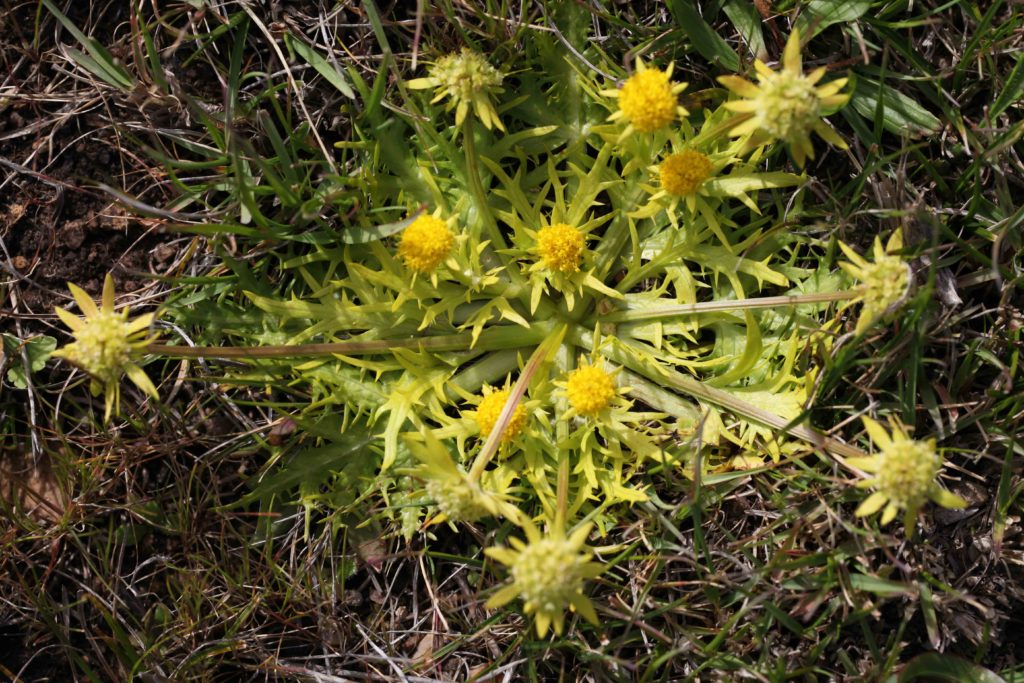 Similar to Gambleweed (Sanicula crassicualis, see below), but much less common.  This plant has slender, pinnate, lobed leaves.  The small flower clusters are often subtended by leaf-like bracts.  The leaves have a coriander-like aroma, and are mildly toxic. 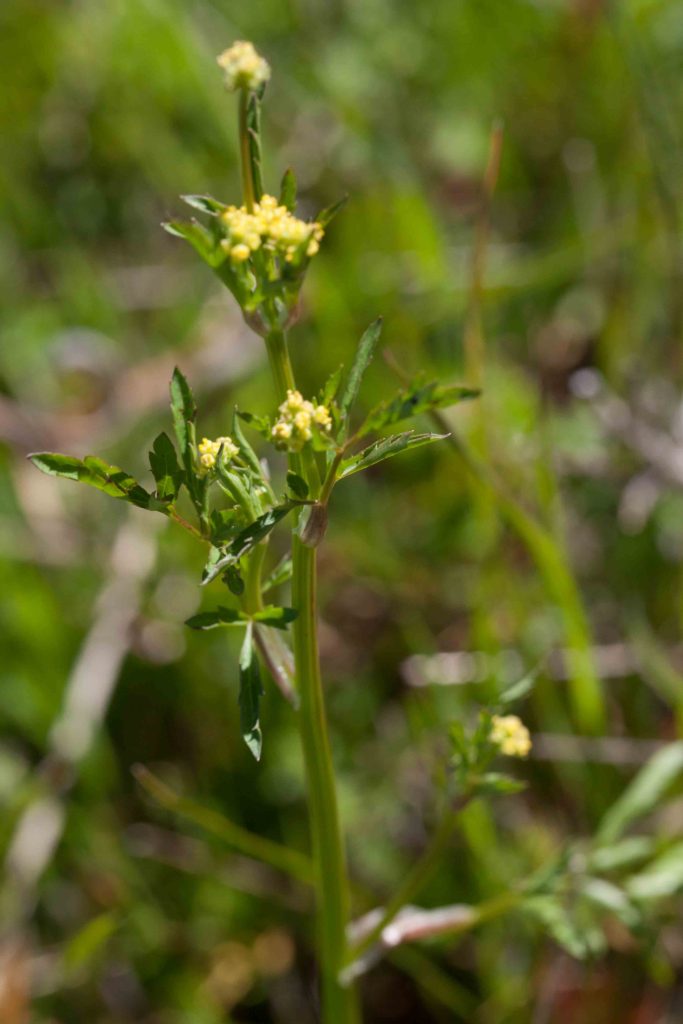 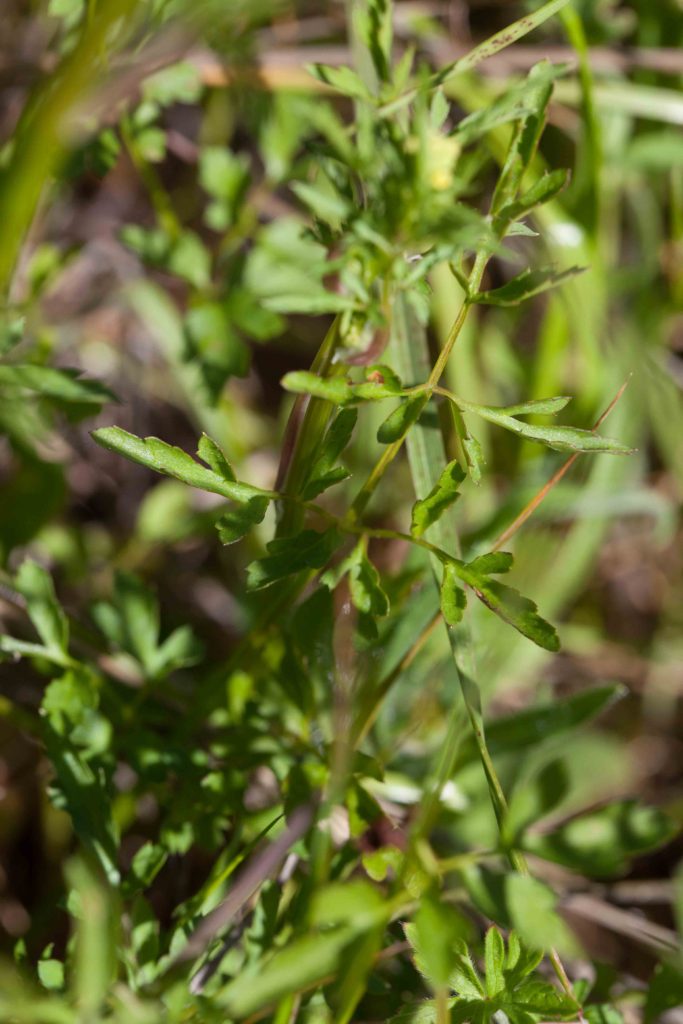 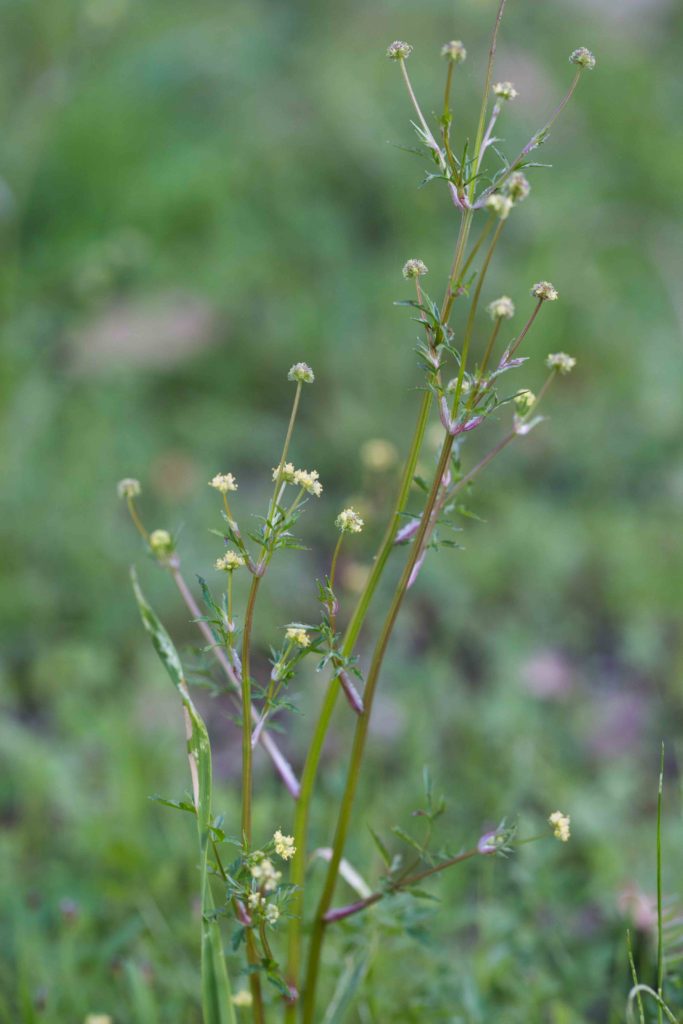 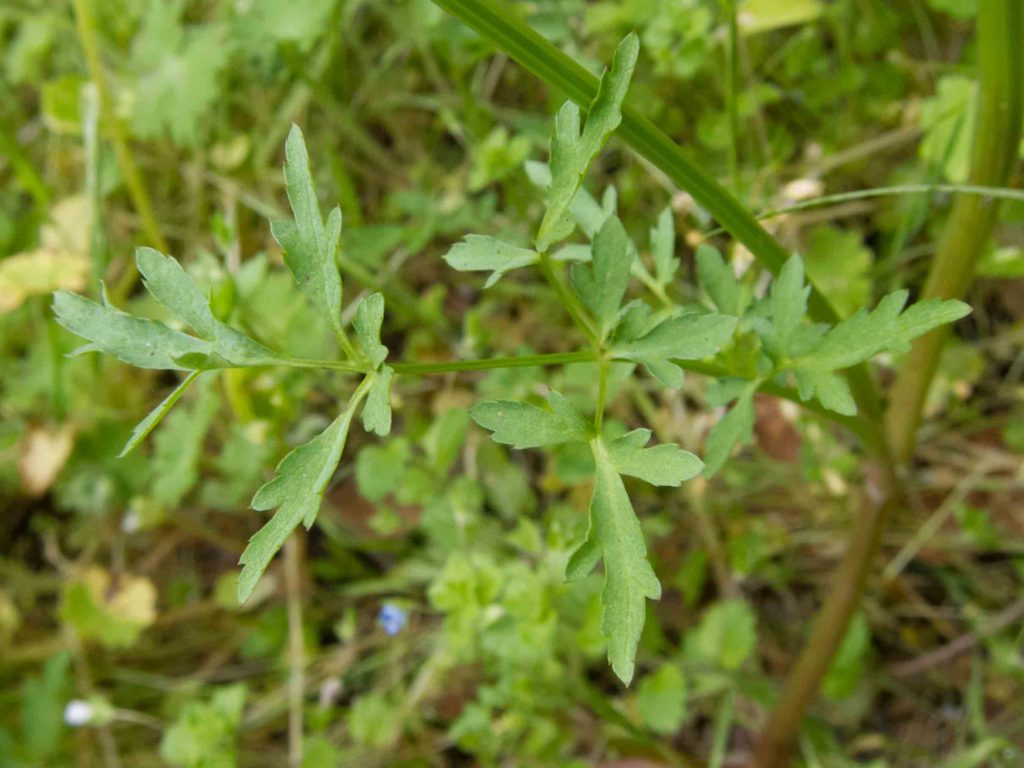 One of the few members of the carrot family which does not have white or yellow flowers. The flowers are more maroon than purple in color, but the growth habit is similar to the other sanicles. Flowers are in a tight spherical head with prominently exserted stamens. “Bipinnatifida” refers to the leaves and means bipinnately cleft; i.e. split part way but not so as to form separate leaflets. 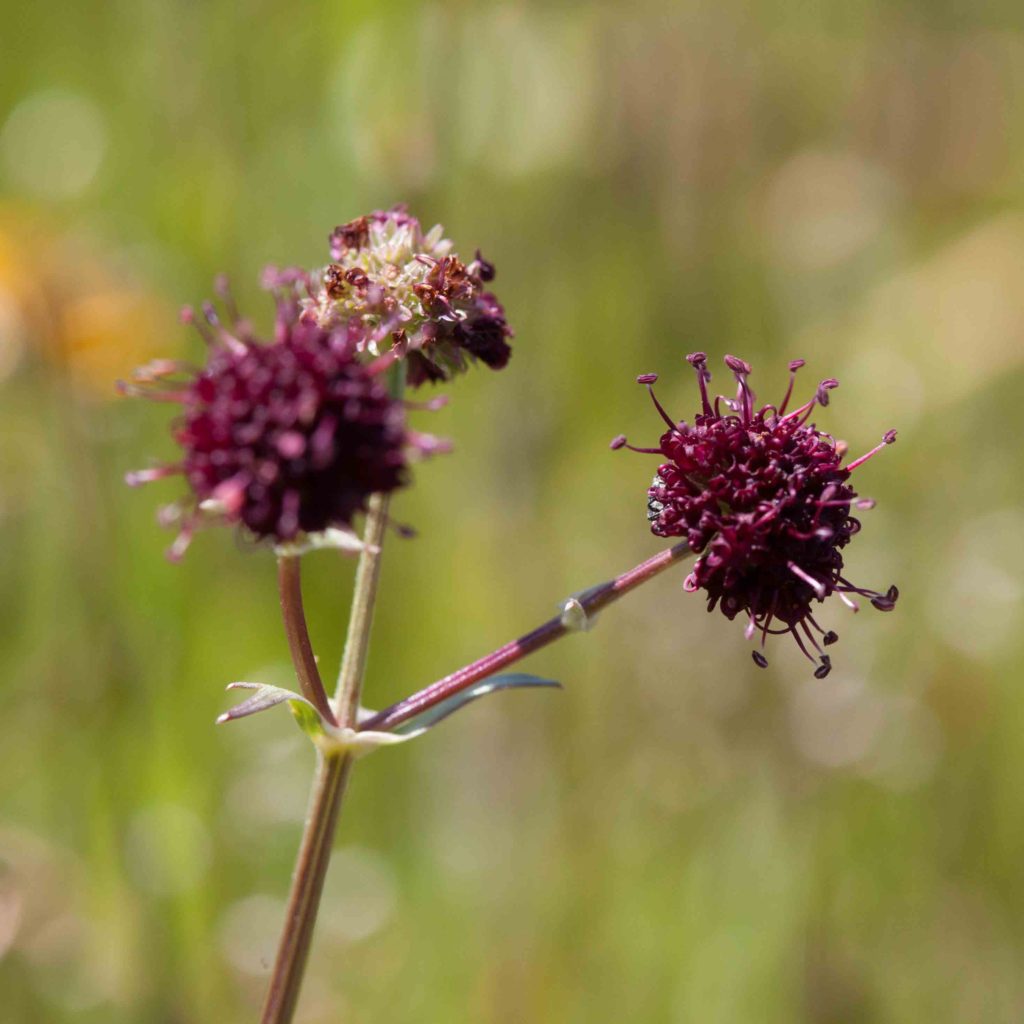 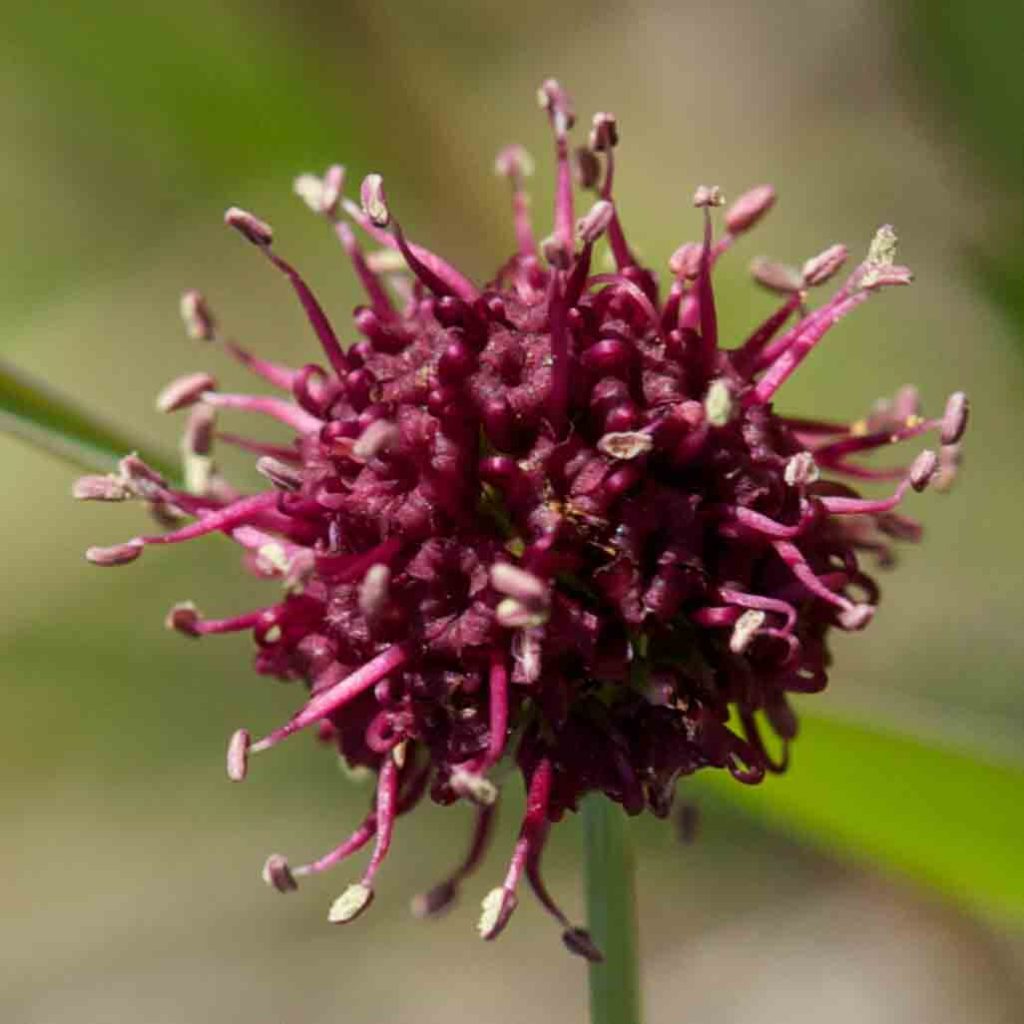 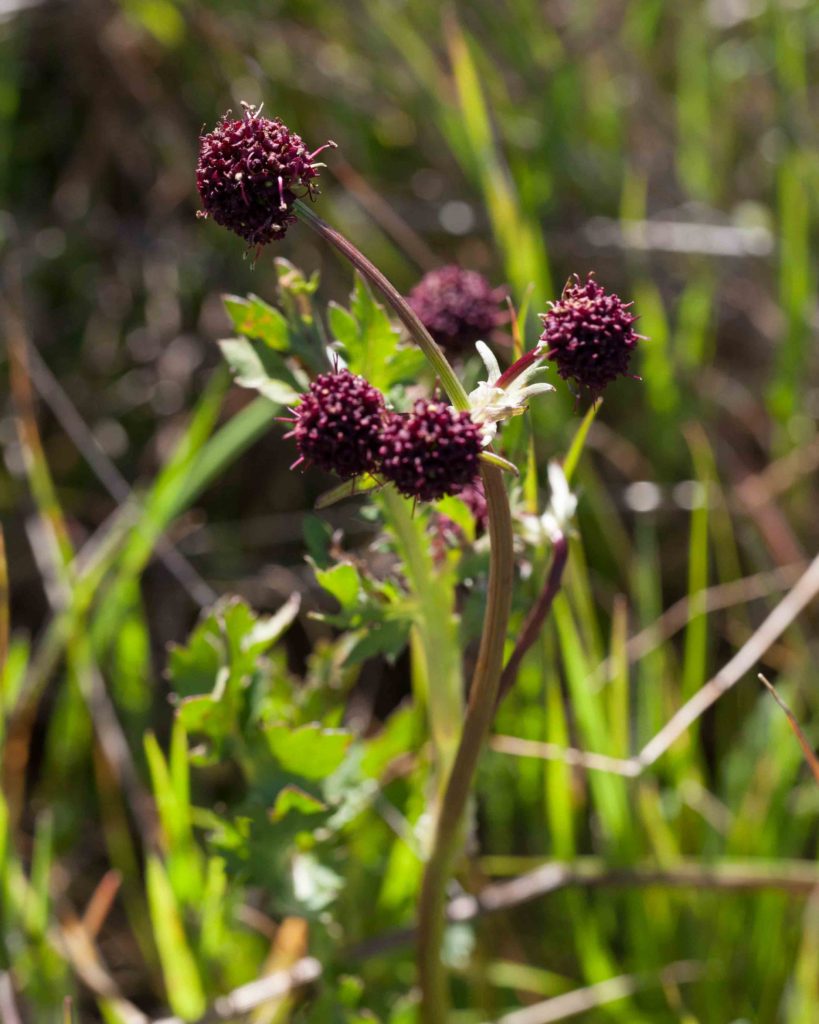 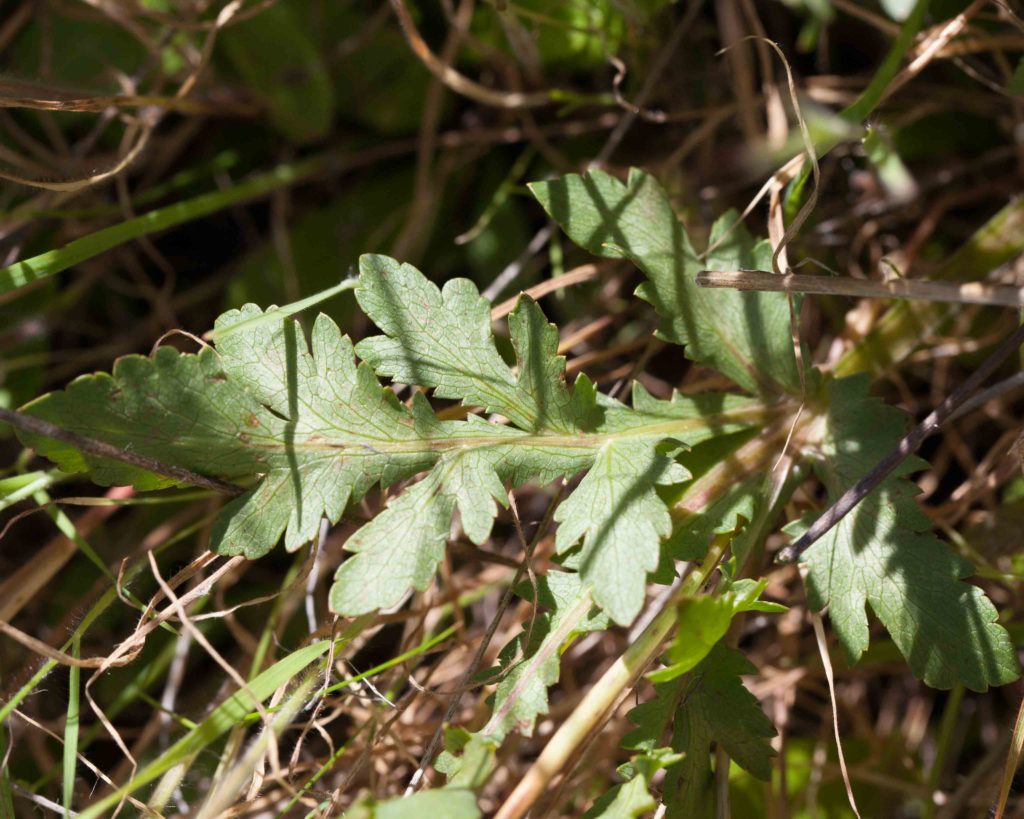 Gambleweed is very common, with distinctive lobed or serrated leaves.  It has multiple heads of yellow flowers, with recurved petals.  Leaves are variable, sometimes dark green with noticeably pointed lobes, other times paler with rounded lobes.  Each inflorescence is subtended by about 5 narrowly lanceolate bracts. 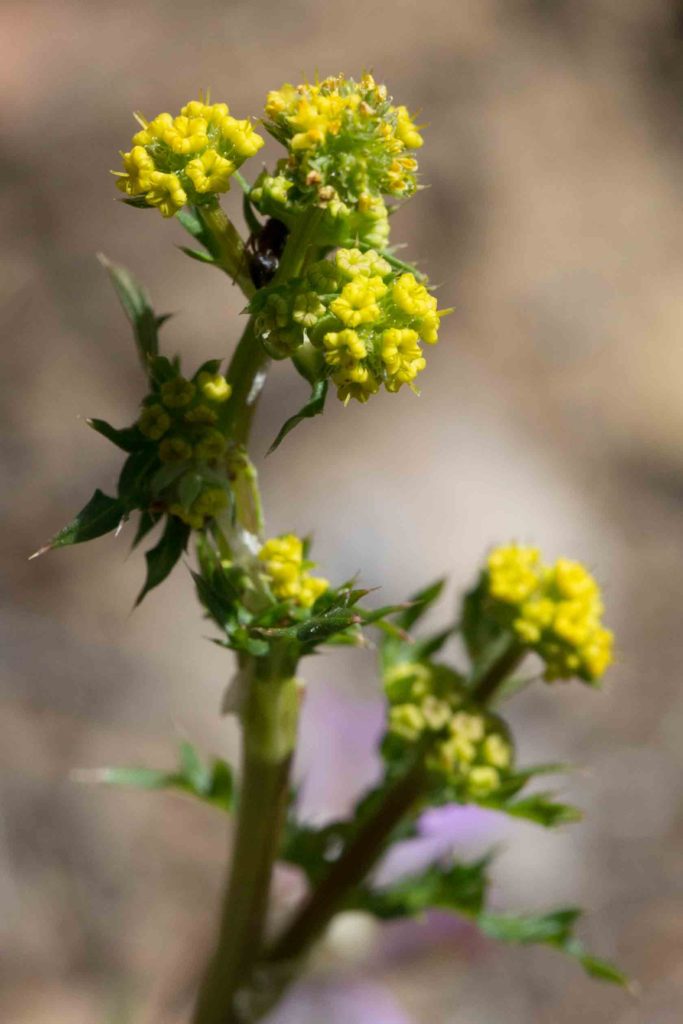 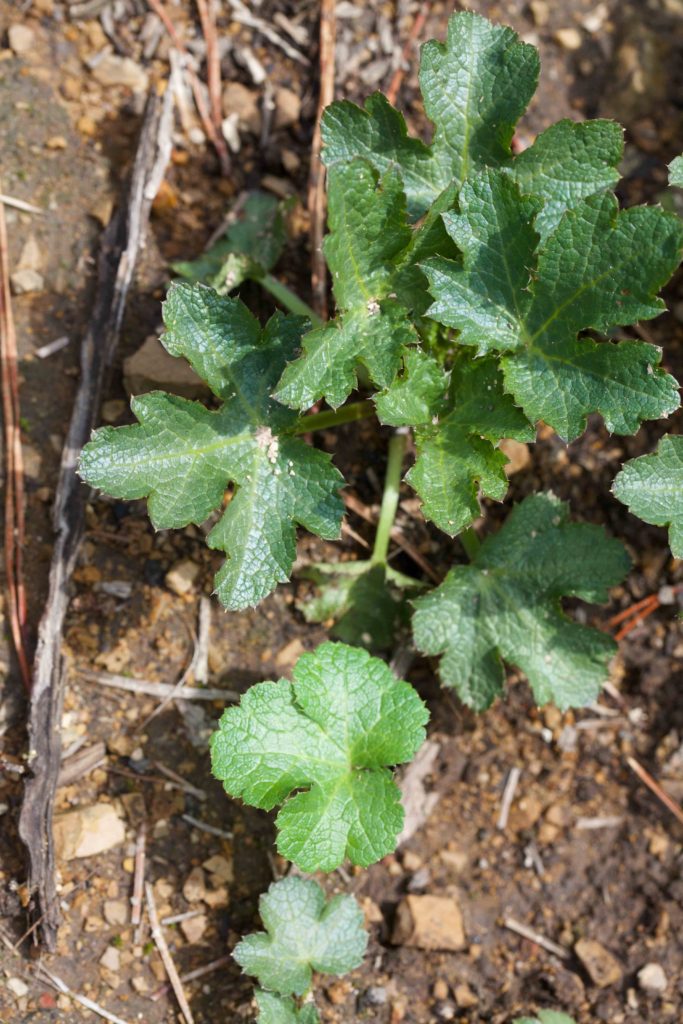 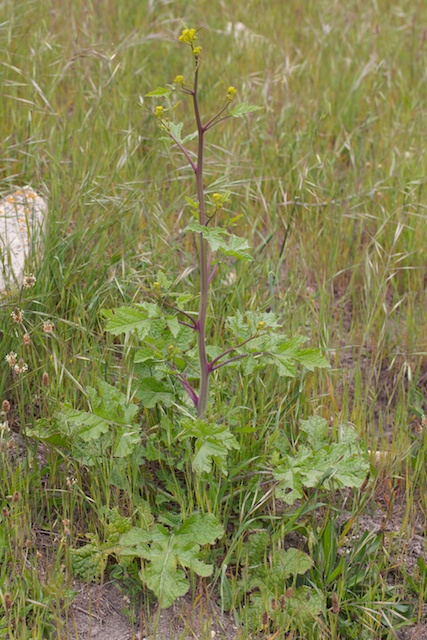 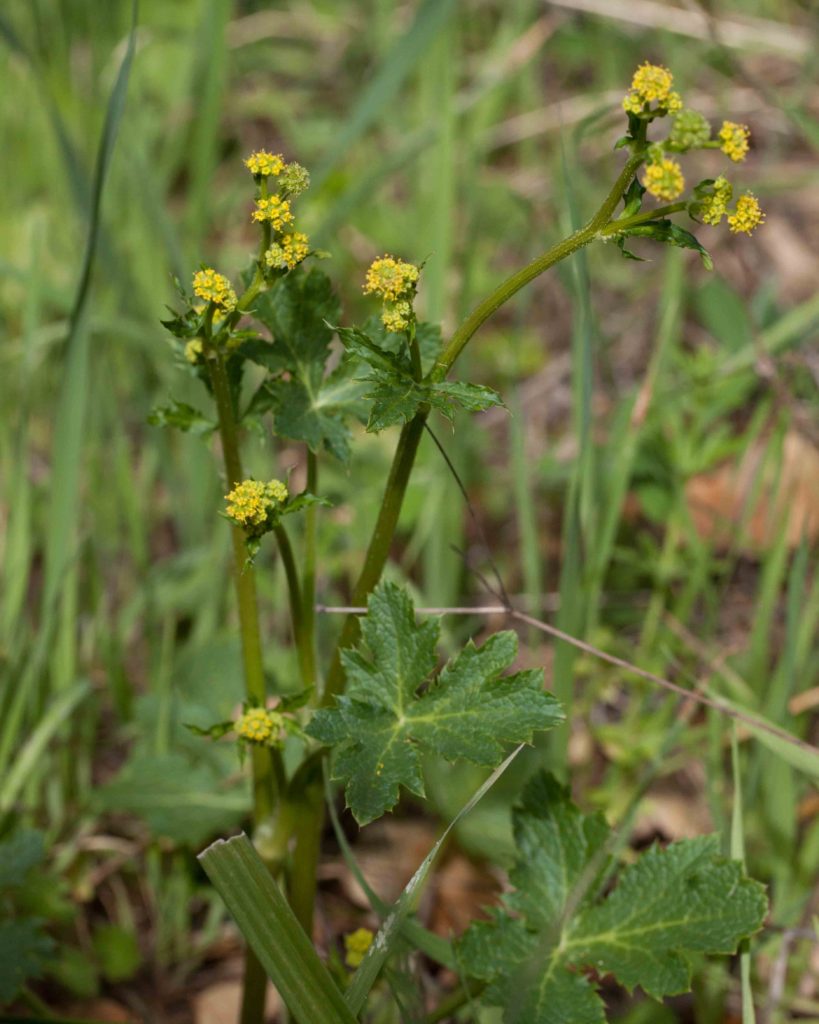 Near coast, generally on open or shrubby slopes

A fairly small plant, branching from its base. Leaves are basal; simple, or palmately or ternately lobed with pointed teeth. The main leaf axis has toothed wings and is > 1 cm wide at its base. Fruits are prickly throughout. 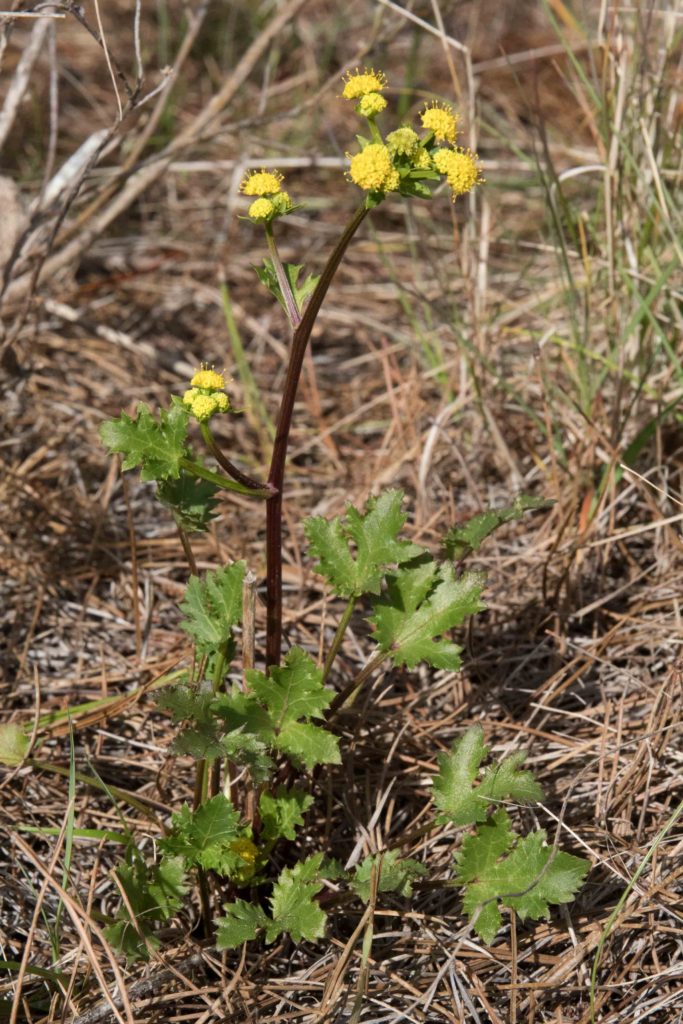 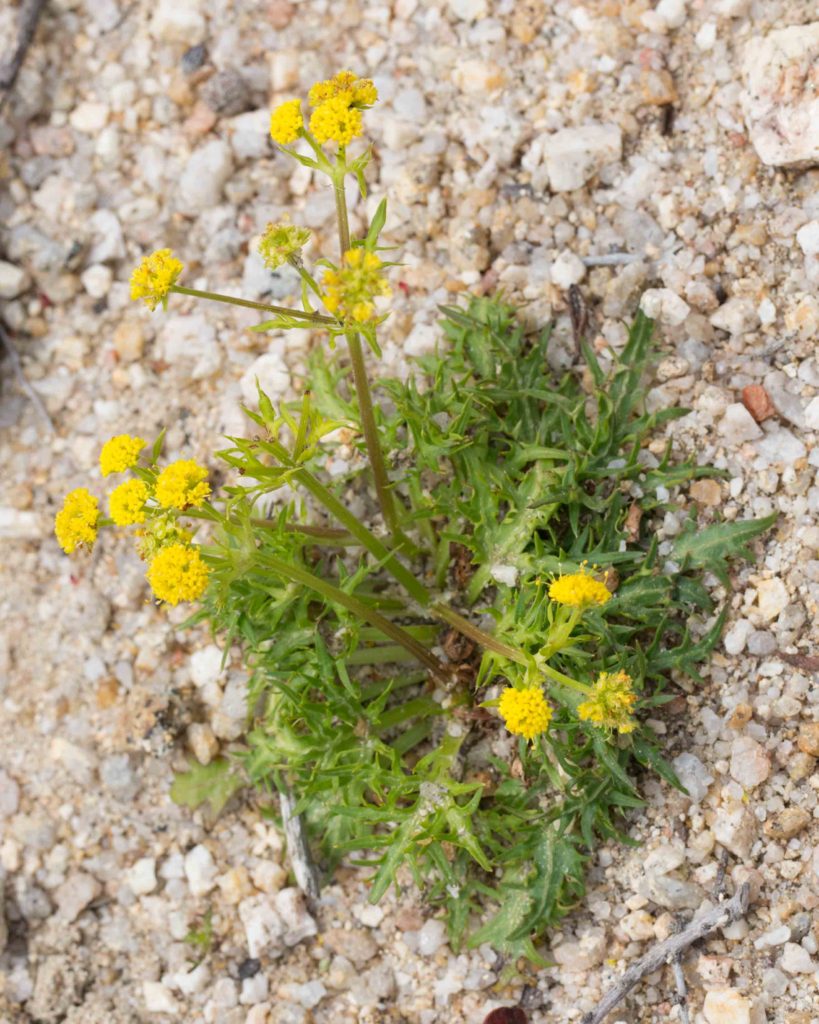 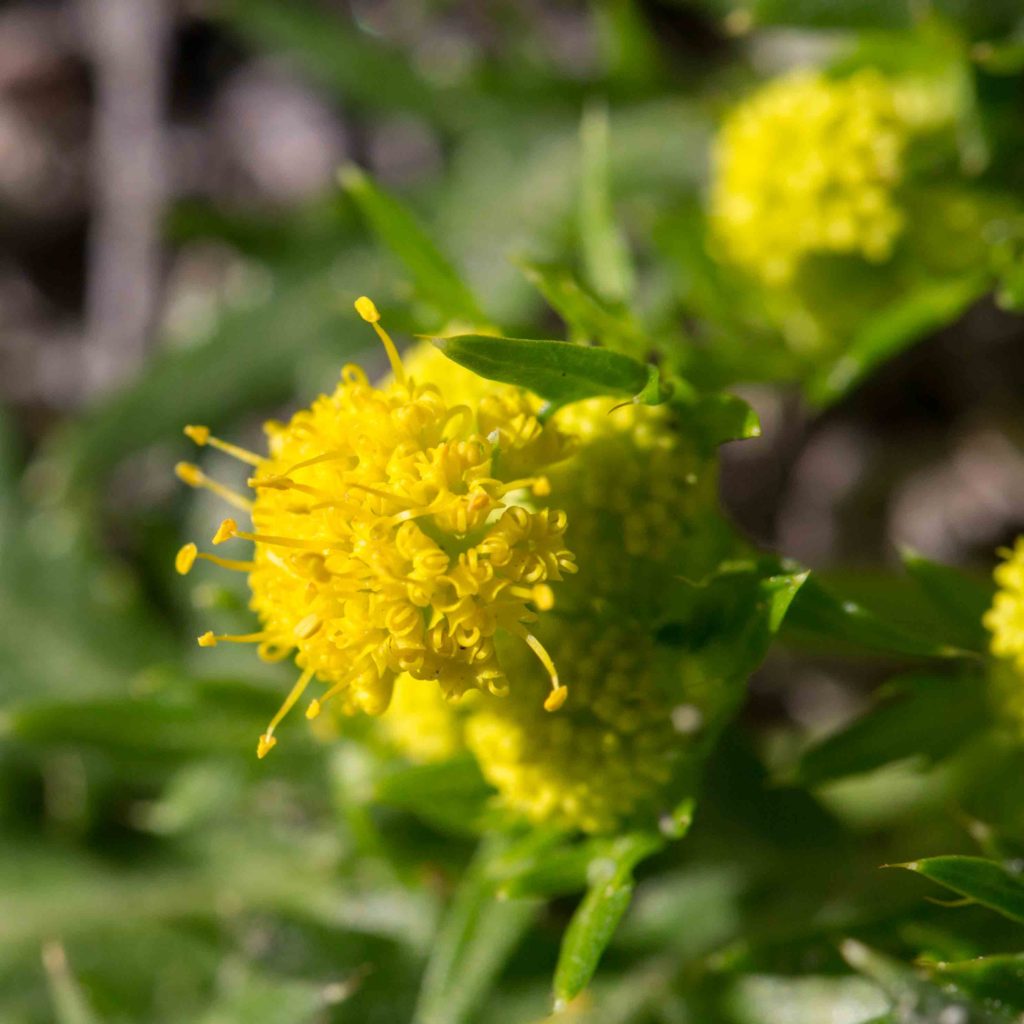 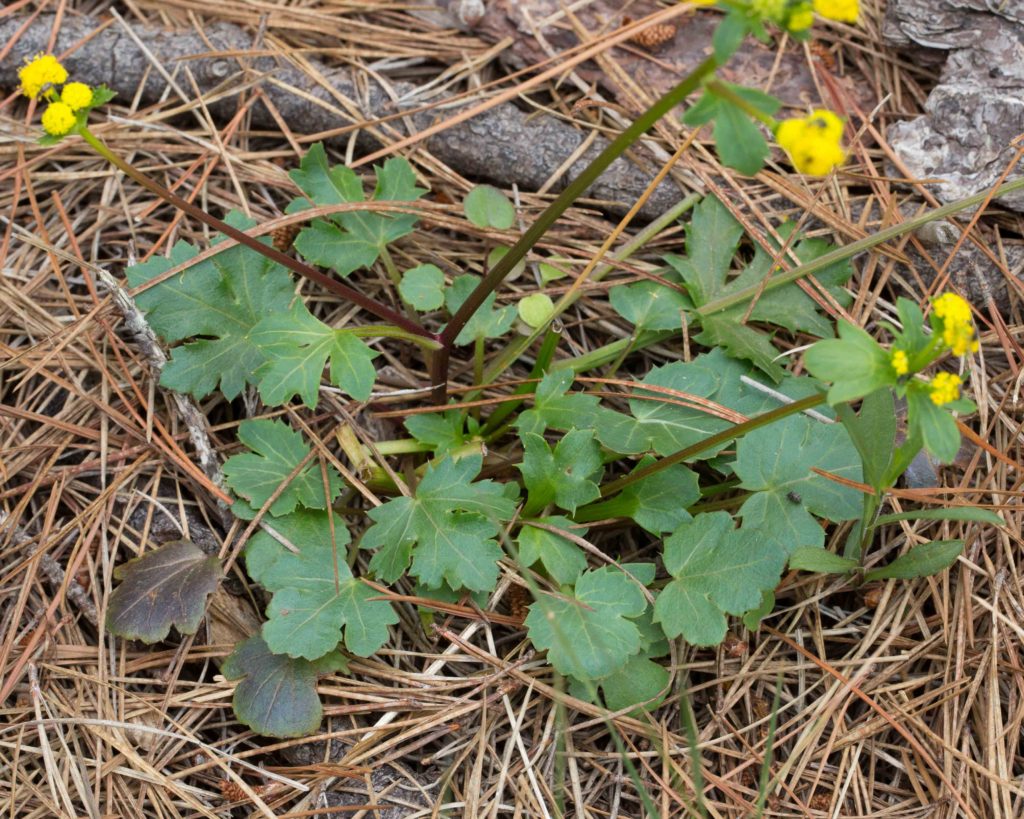 Shaded chaparral and woodland below 1800 m

Hartweg’s Tauschia has its flowers in a compound umbel, like a lomatium.  Its leaves could be mistaken for those of Gambleweed (Sanicula crassicaulis, see above).  However, these leaves are leathery, and subdivided into 5 oblong to ovate leaflets with rounded, toothed segments.  The peduncle is 18–45 cm long, topped by the inflorescence in a compound umbel of tiny yellow flowers.  Fruits are roundish, with the central axis divided almost to the base. 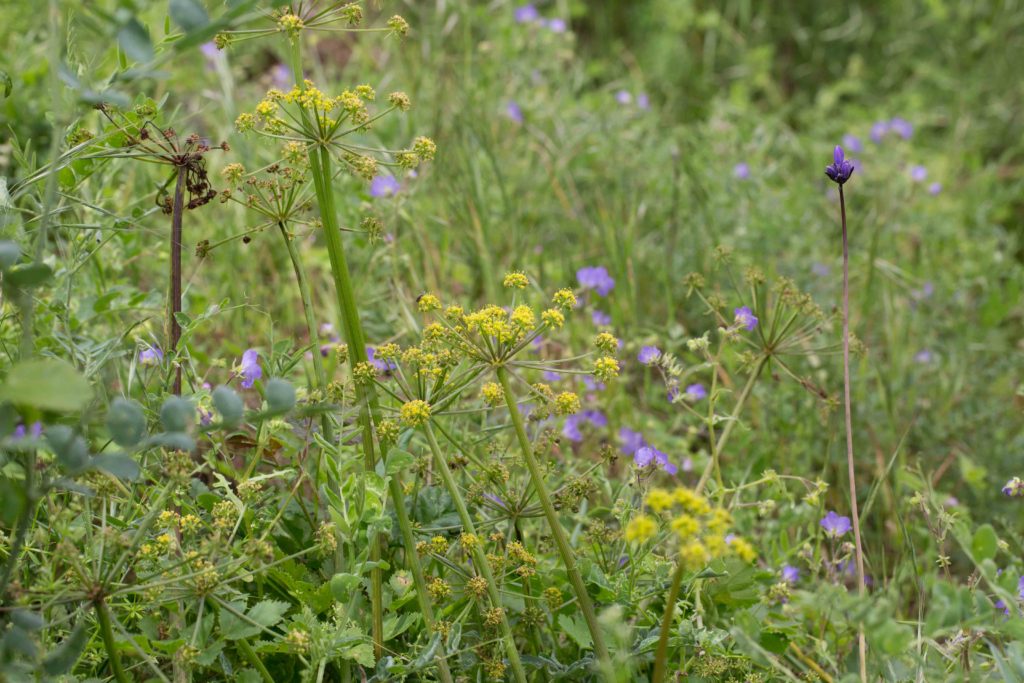 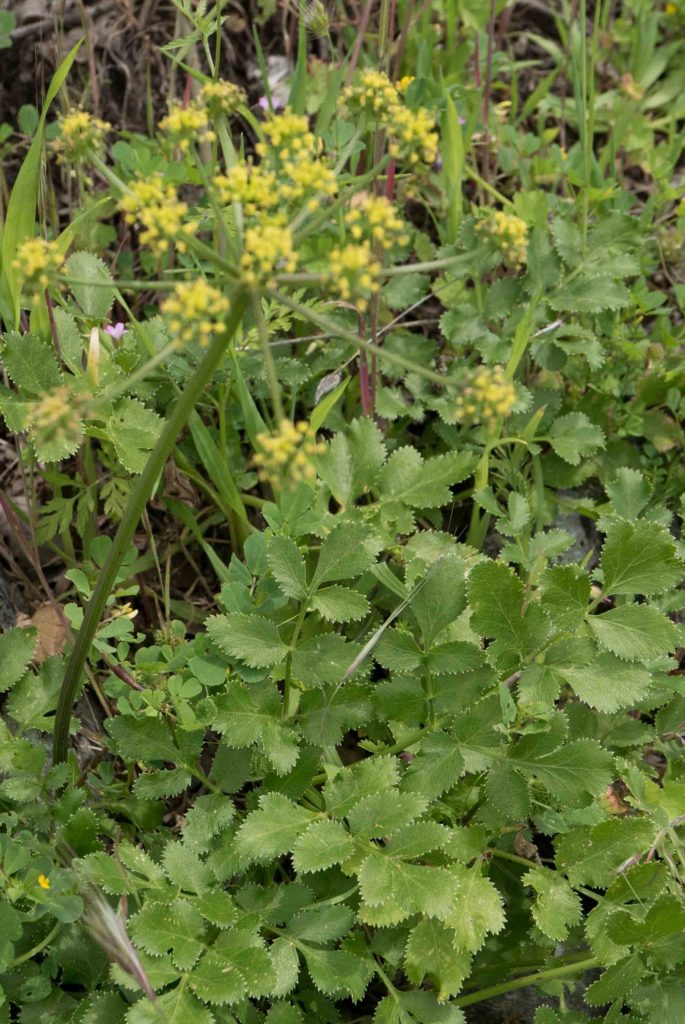 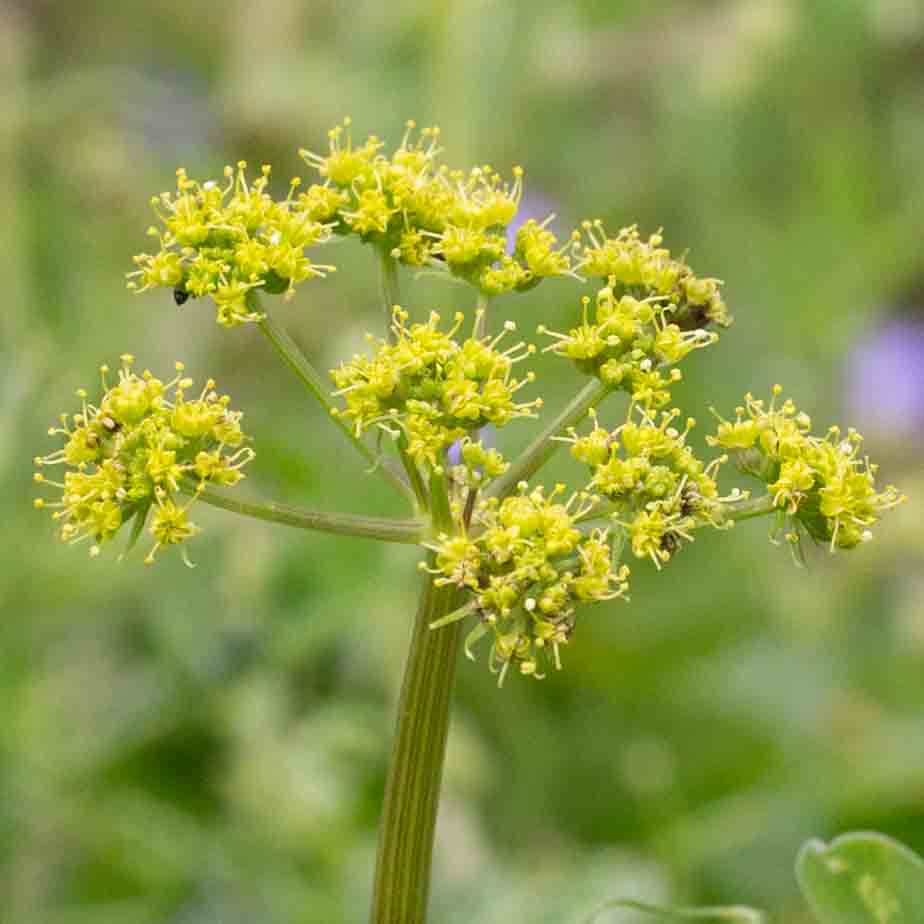 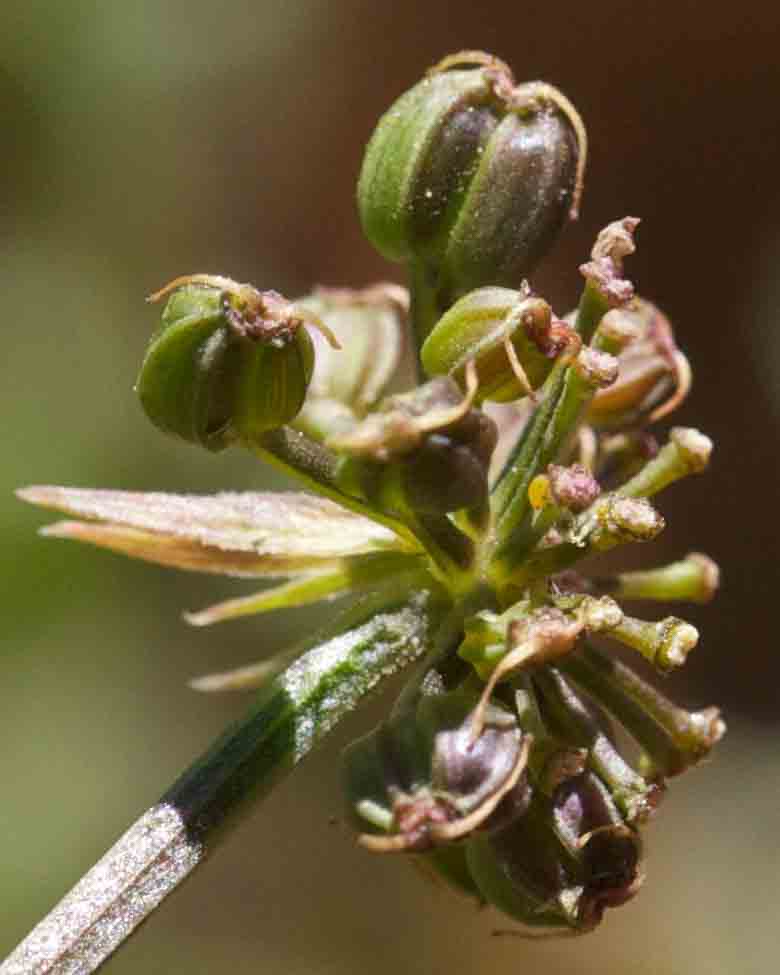