The Sunflower family is a very large family with over 25,000 members.  Botanists subdivide the family into a number of tribes, of which 14 are present in Monterey County.  One of these, the Heliantheae or Sunflower tribe, is further broken down into subtribes, of which 9 are present.  This page covers 2 subtribes with striking flowers.

This is quite distinctive with its discoid head, which is doughnut-shaped before the inner disk flowers mature.  Both stems and flower heads are covered in long, glandular hairs.  Anther tips are triangular.  Leaves are generally lanceolate to ovate. 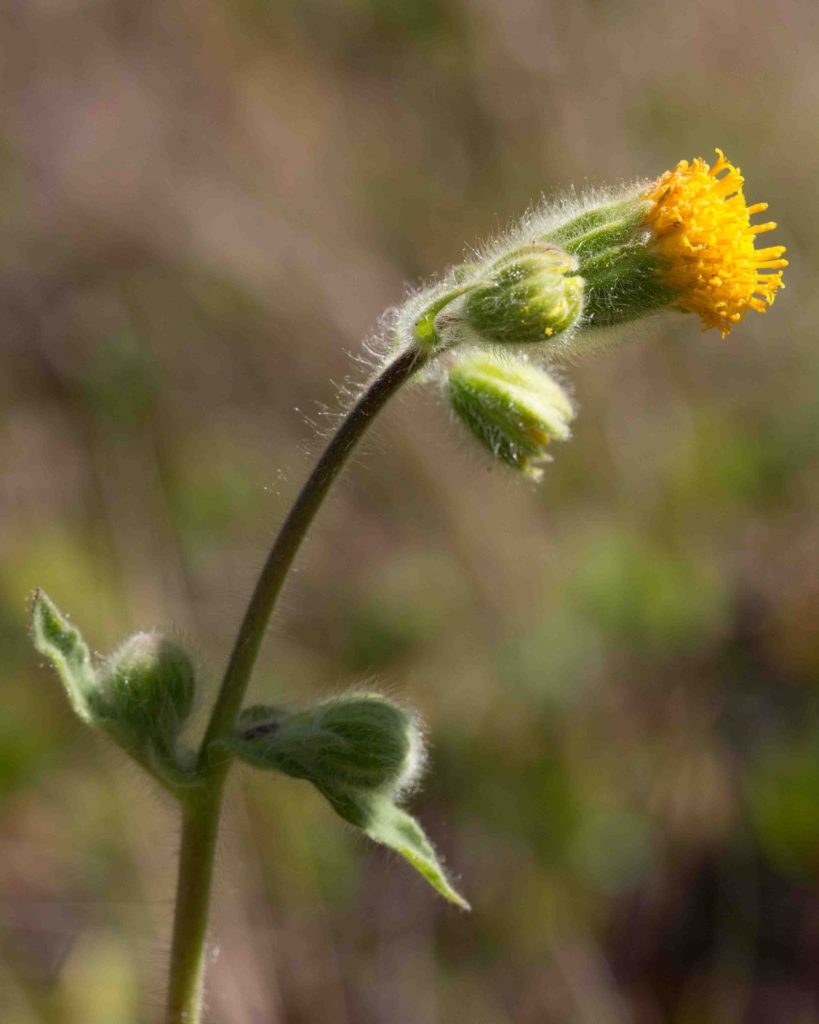 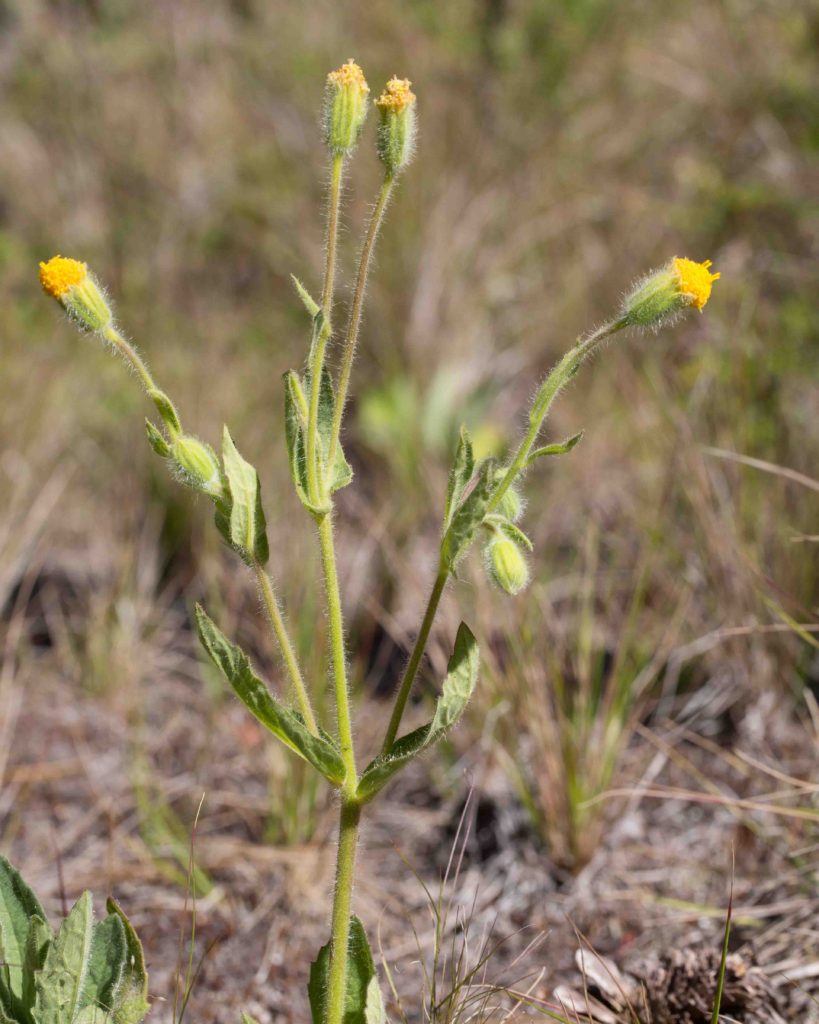 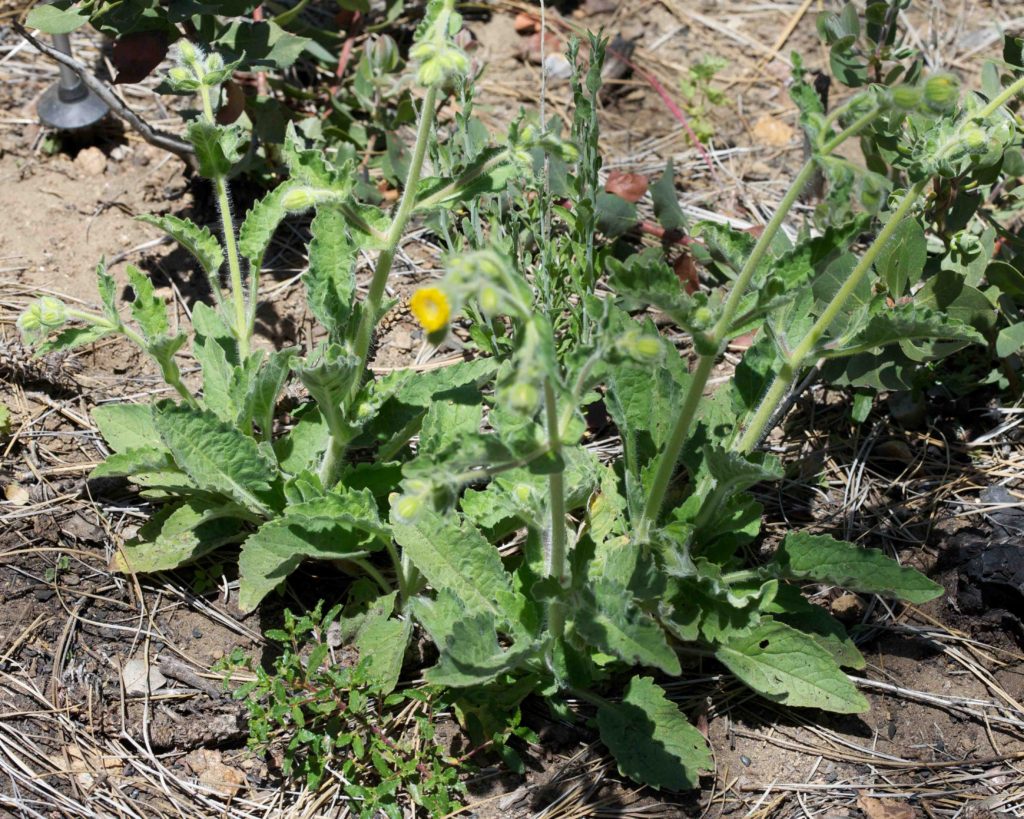 Chaenactis all have “radiant” heads; i.e. all flowers are disk flowers, but those around the periphery are much enlarged and often bilateral.  The varieties can be hard to distinguish; this one is identified by its inner fruits which have 7 or 8 scales in two series (the others have 4 scales in a single series).   The plant is often branched with both basal and cauline leaves, the large leaves generally 2-pinnately lobed. 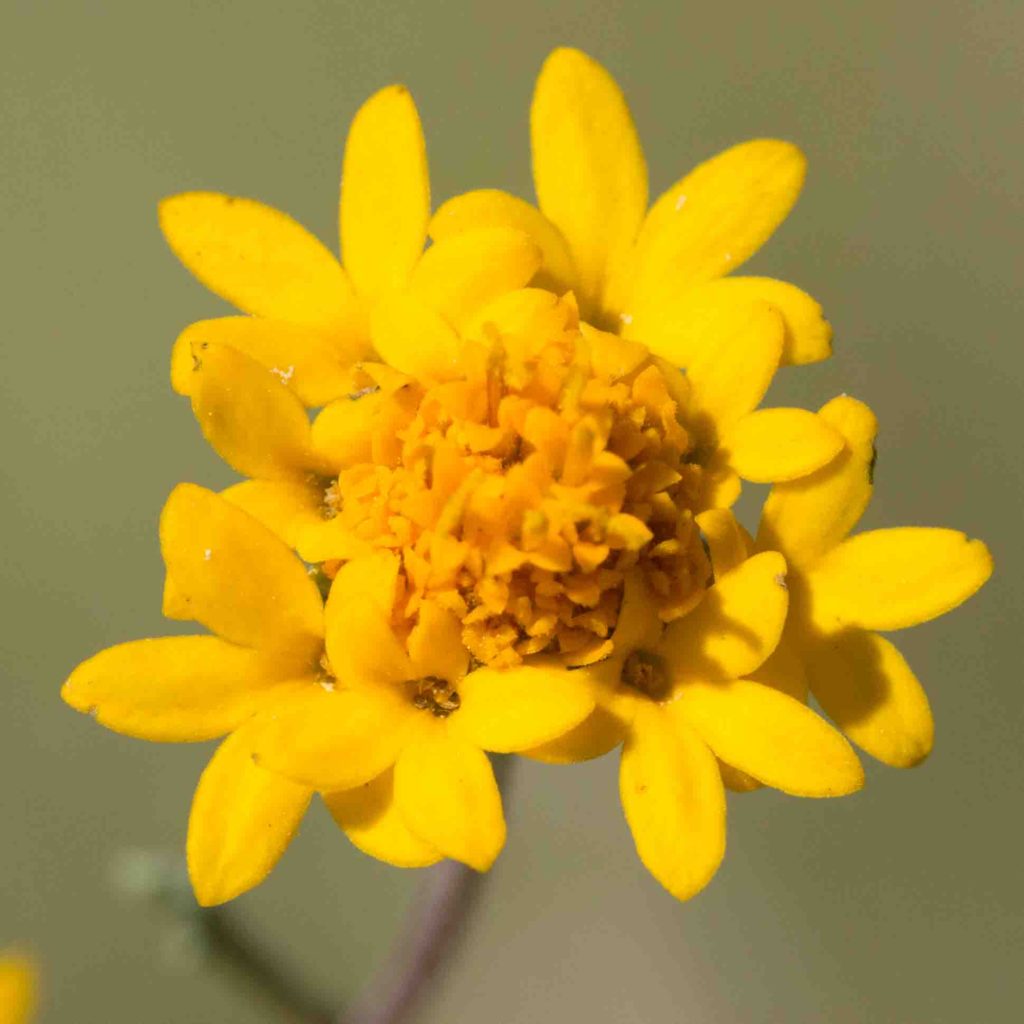 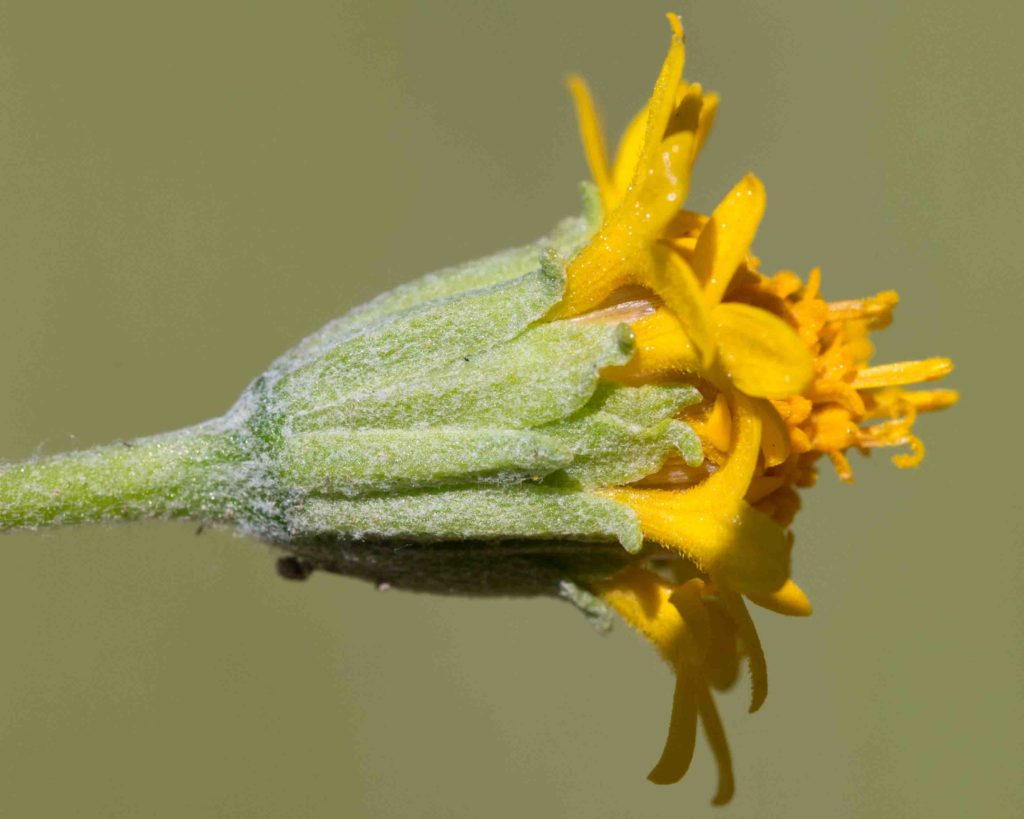 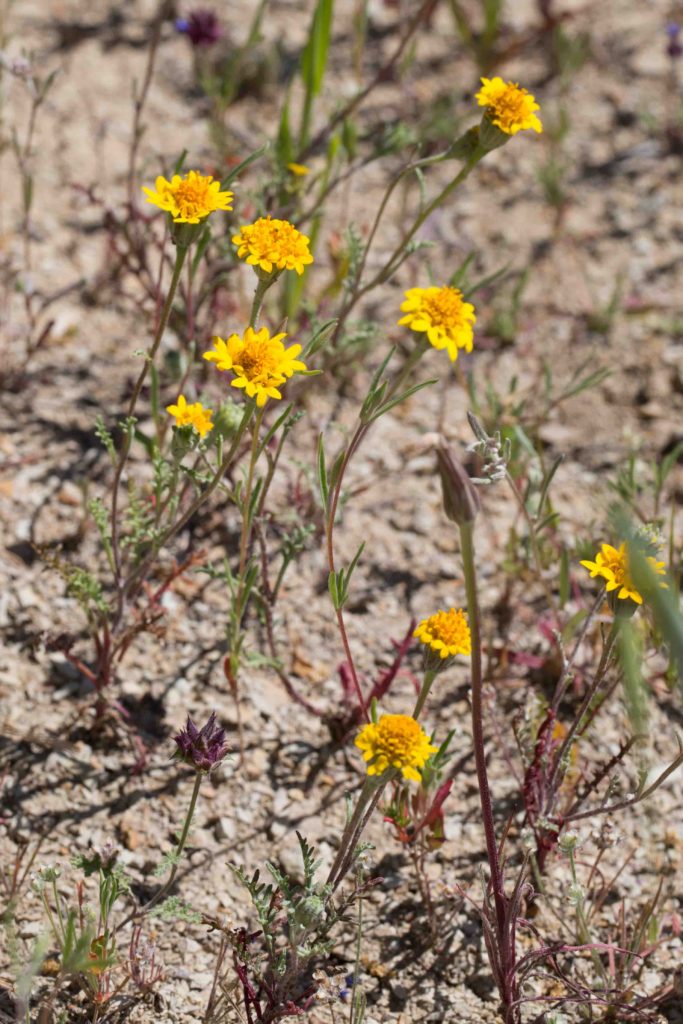 More common than var. heterocarpha (see above), this is a larger plant with “scapose” heads, i.e. borne on unbranched, leafless peduncles, usually one head per peduncle.  Fruits have 4 scales in one series.  Hairs near the base of the plant are white-tomentose to woolly.  Leaves are basal and may be cylindric or flat, entire or pinnately lobed.  Sometimes found in profusion, resembling (from a distance) late-flowering goldfields, for instance along the road leading to the eastern entrance to the Pinnacles. 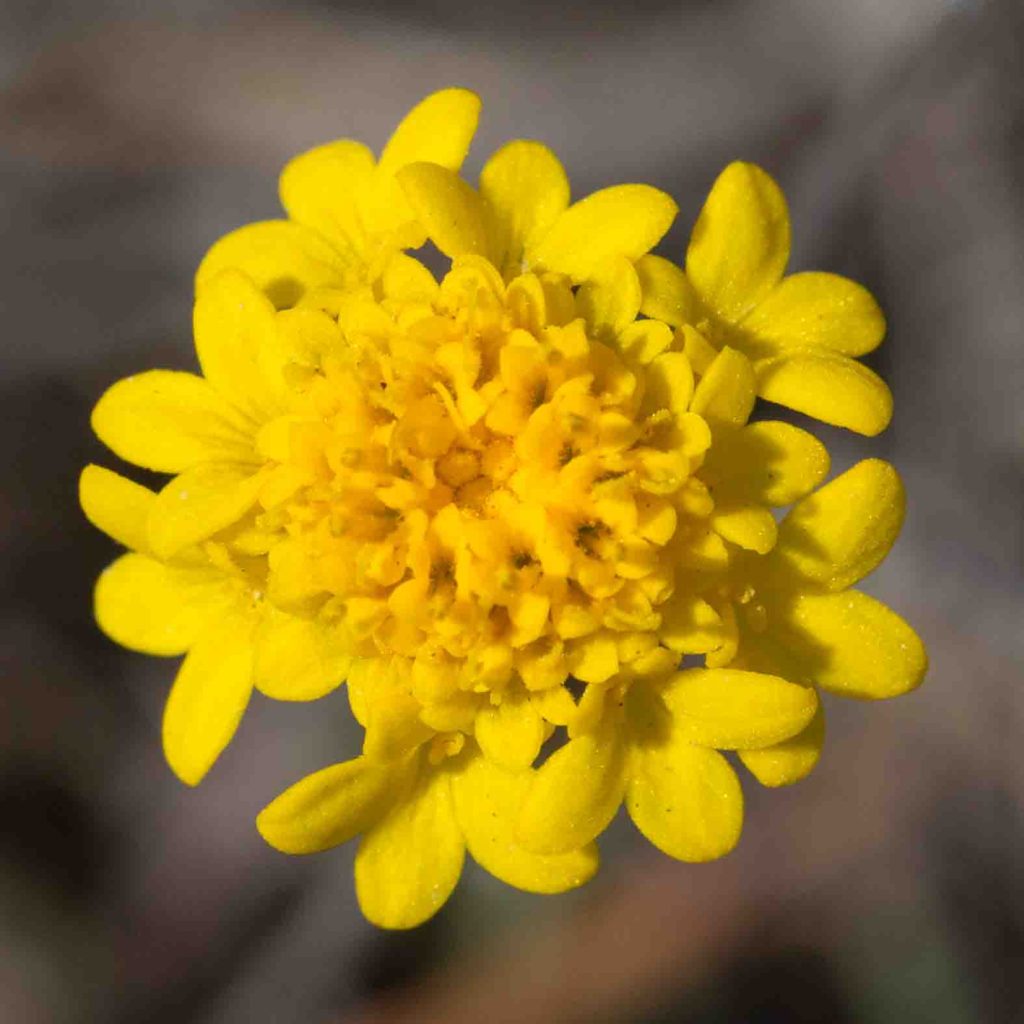 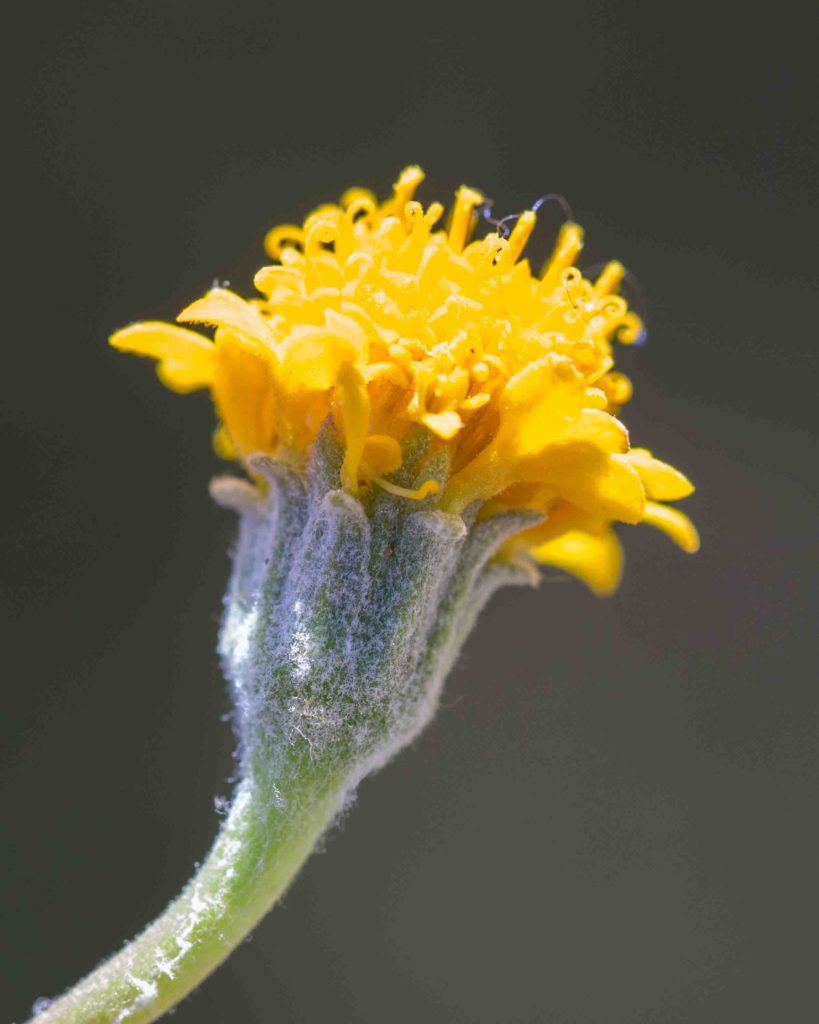 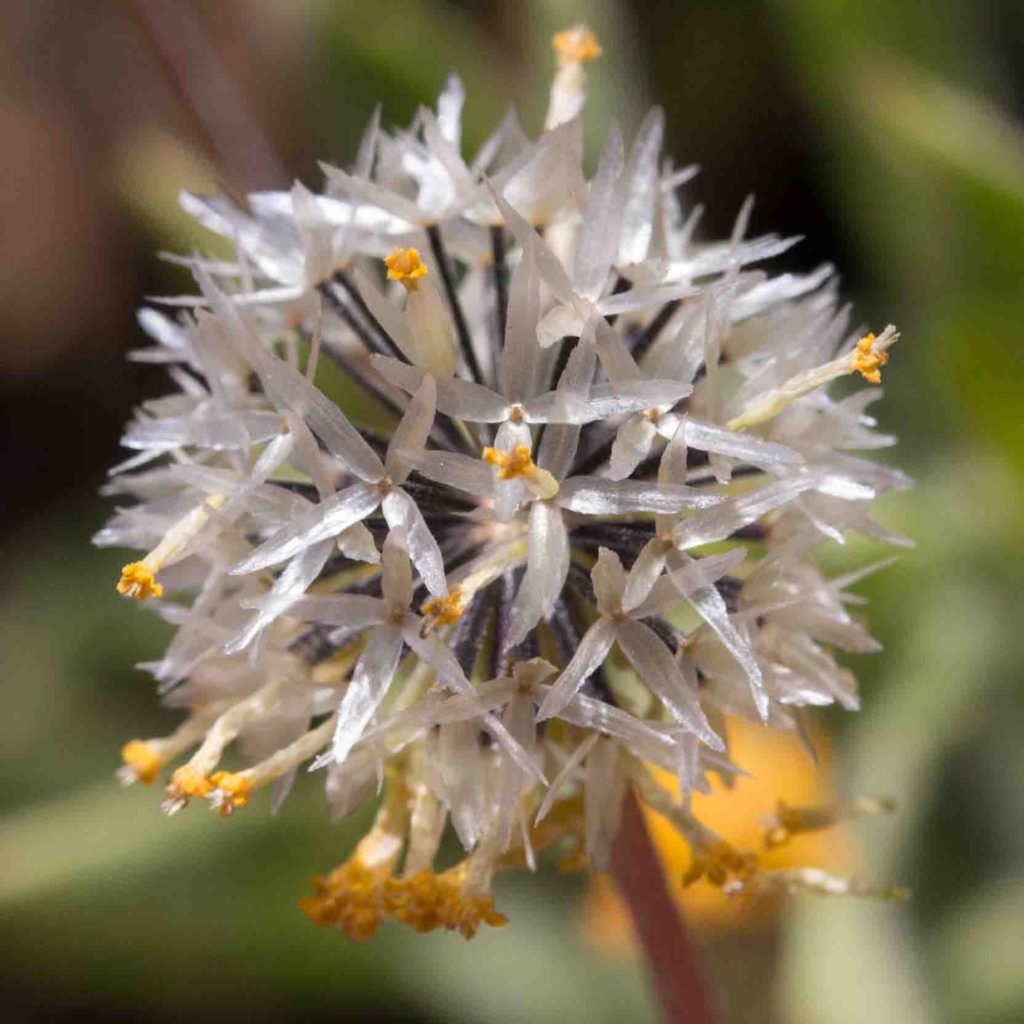 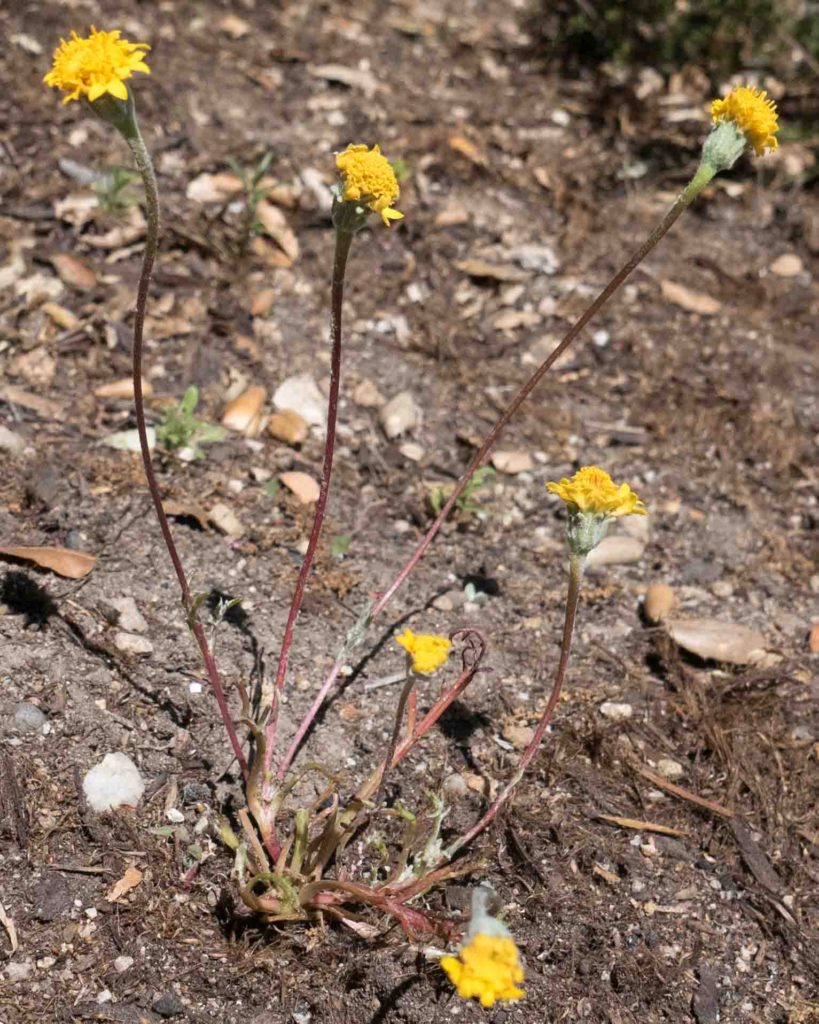 Open sites above 300 m, generally after burns or disturbance

This plant is a fire follower.  It is unmistakable, with a fringe of 30–75+ small, linear, deep red ray flowers surrounding numerous yellowish-orange disk flowers.  Basal leaves are 1–2 cm long and coarsely toothed; upper leaves are progressively smaller.  Photo #2 by CJH. 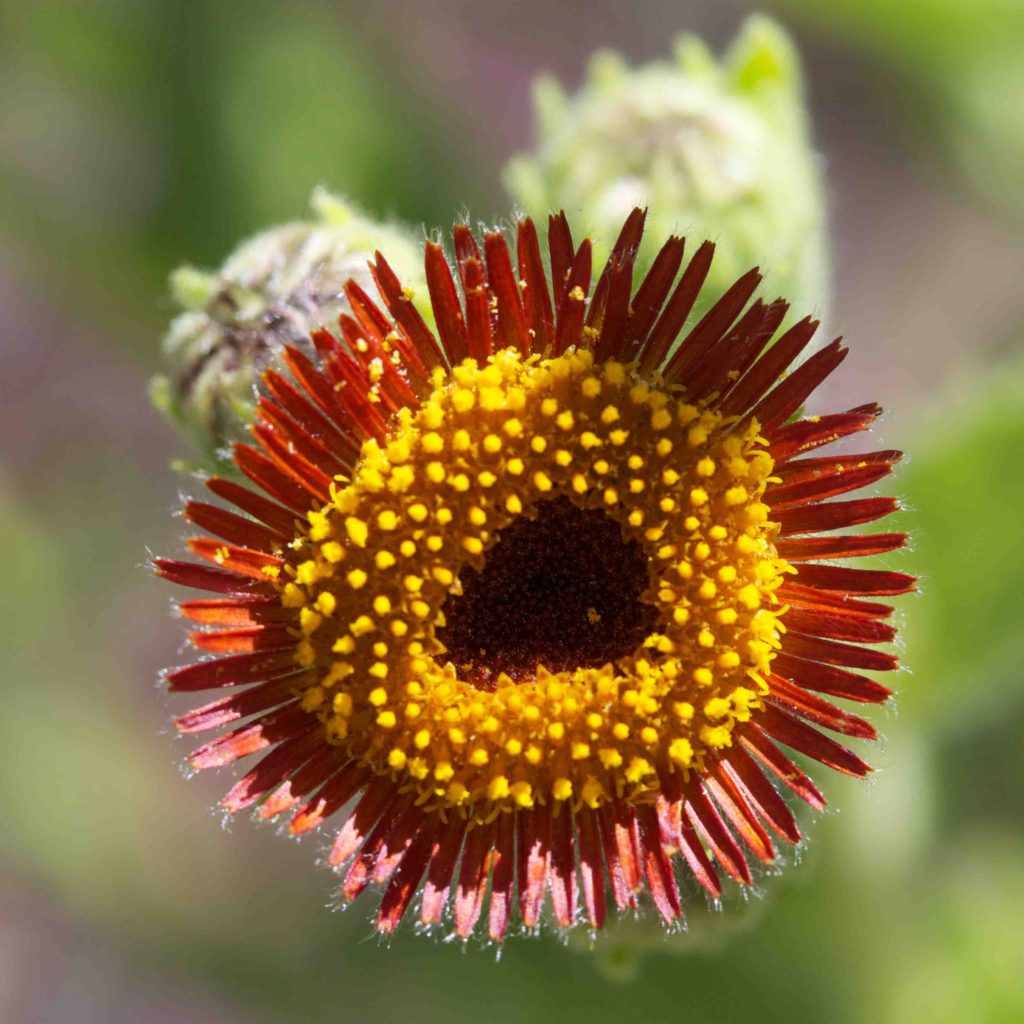 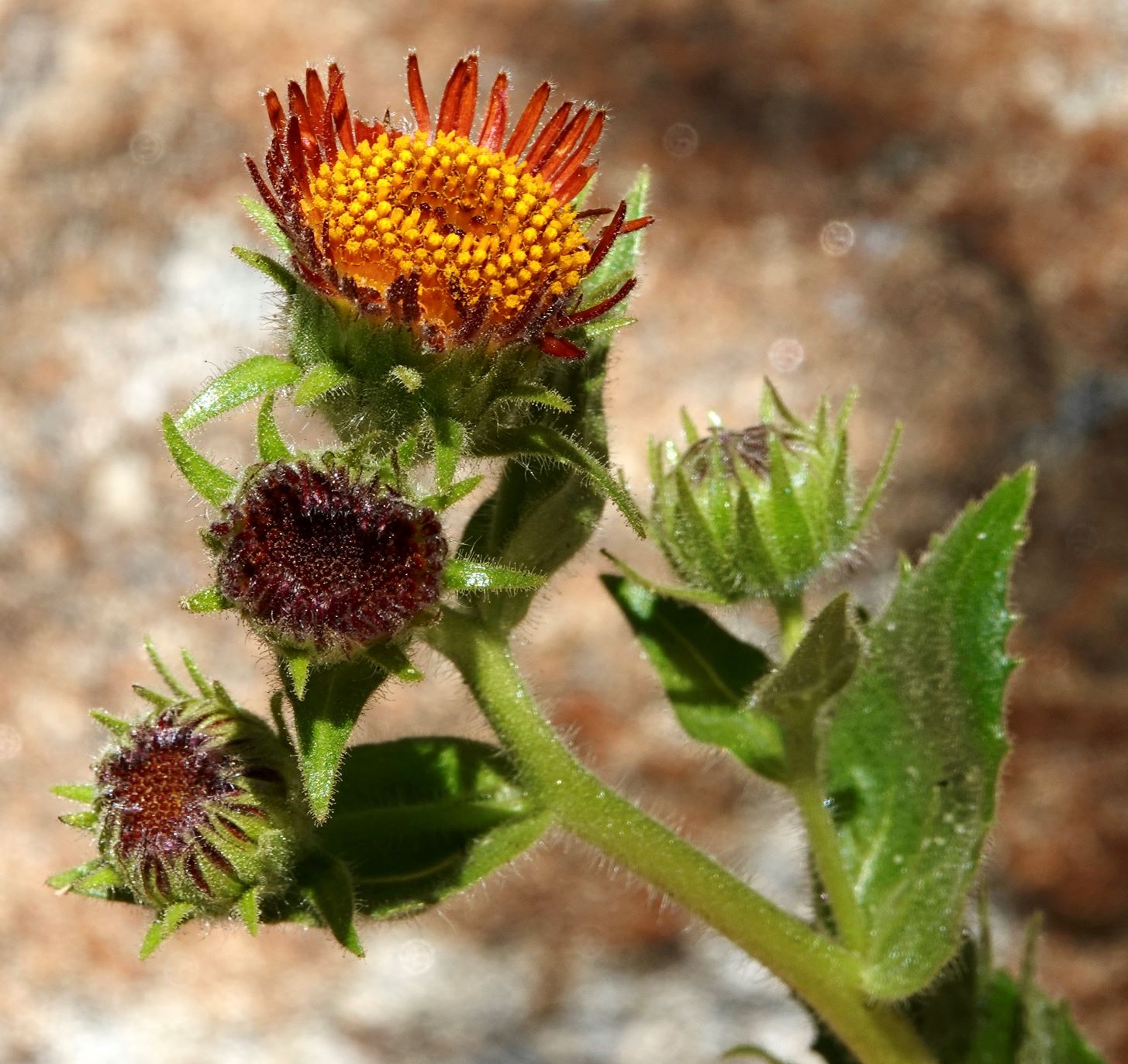 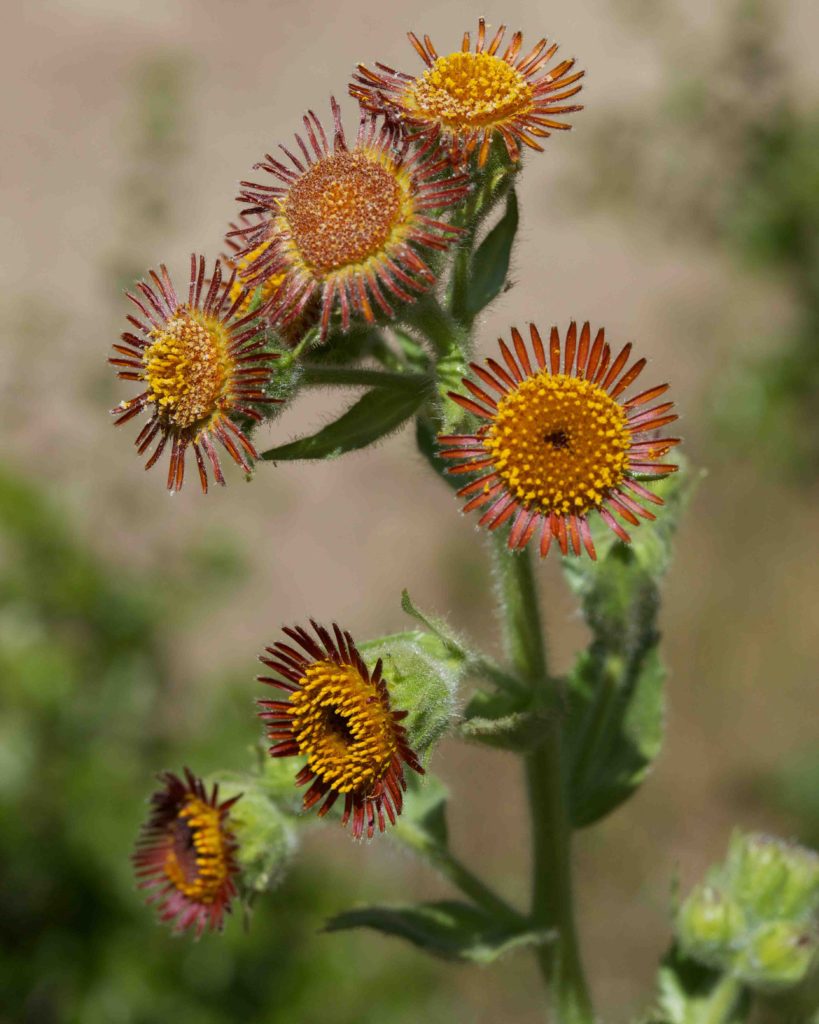 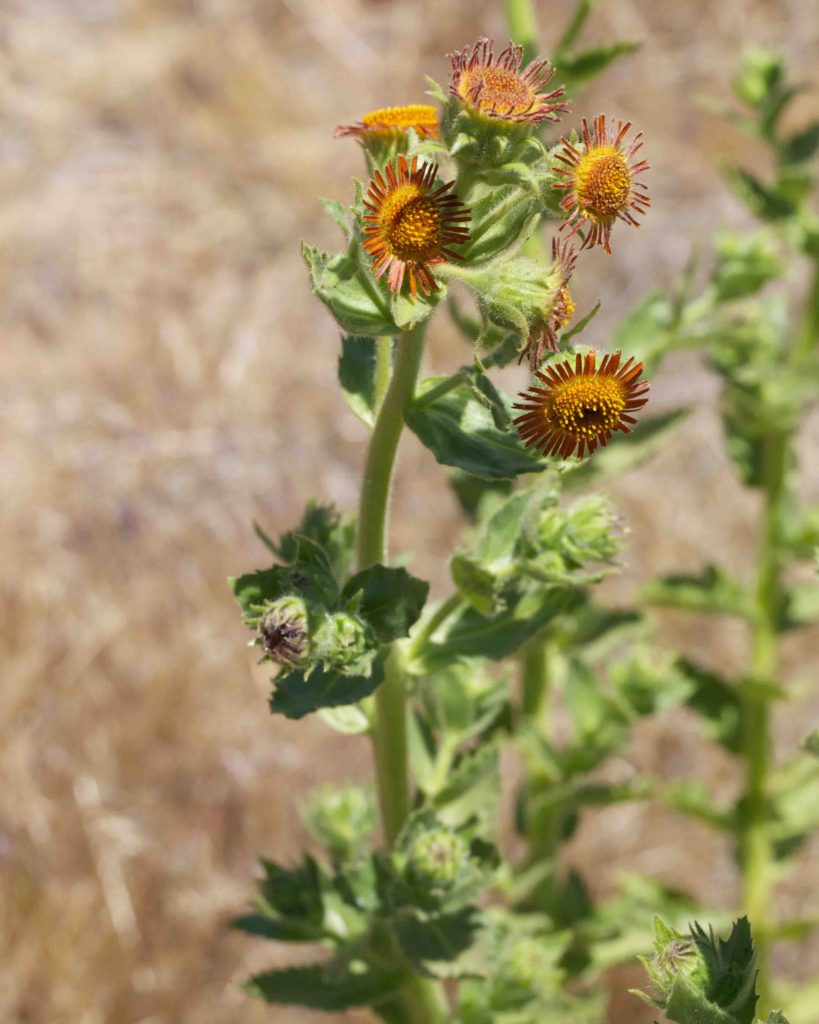 Like the other two Mule Ears (Wyethia glabra & helenioides, see below), this has a large flower head.  Compared to them, this one is a little smaller, with generally fewer (8-21) and smaller (15–45 mm) rays, and with phyllaries shorter than the ray flowers.  The leaves are narrow, slightly rough or hairy, often with wavy edges.  Photo #3 by CJH. 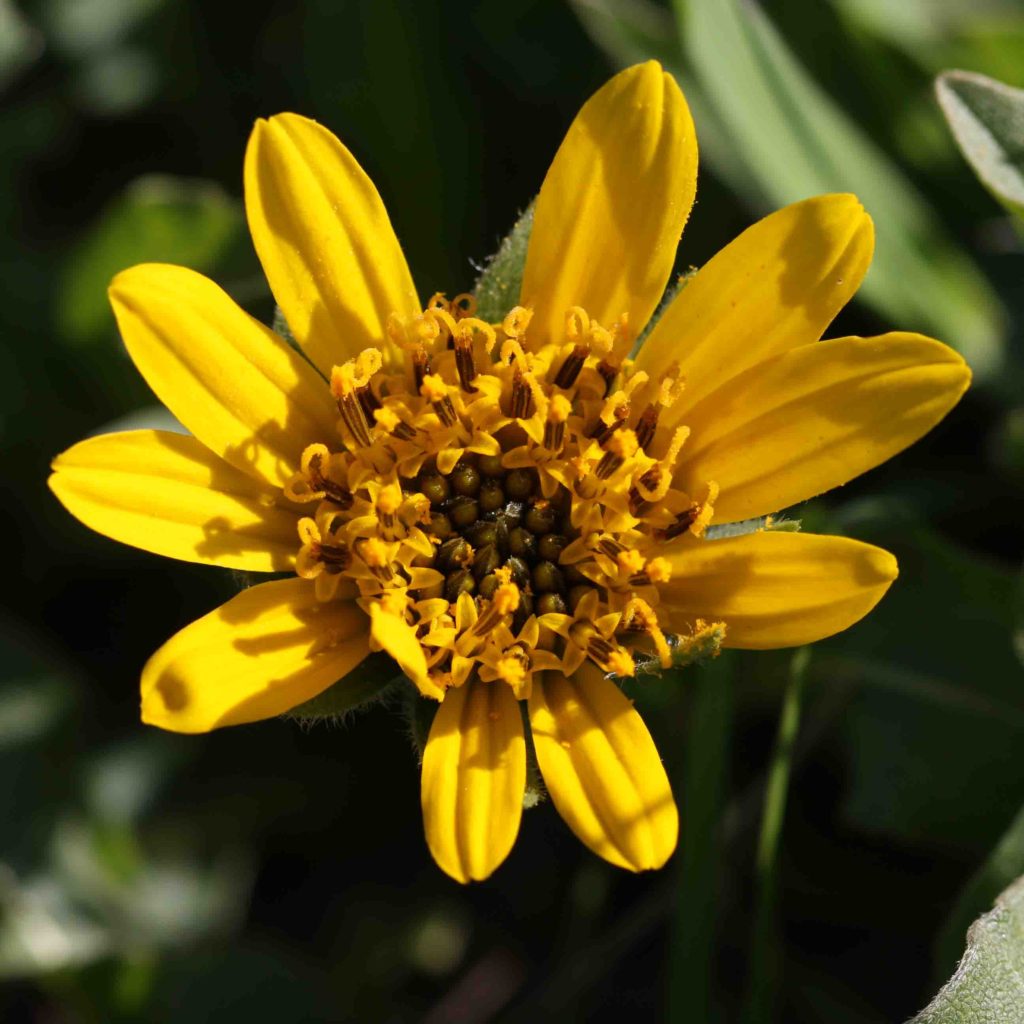 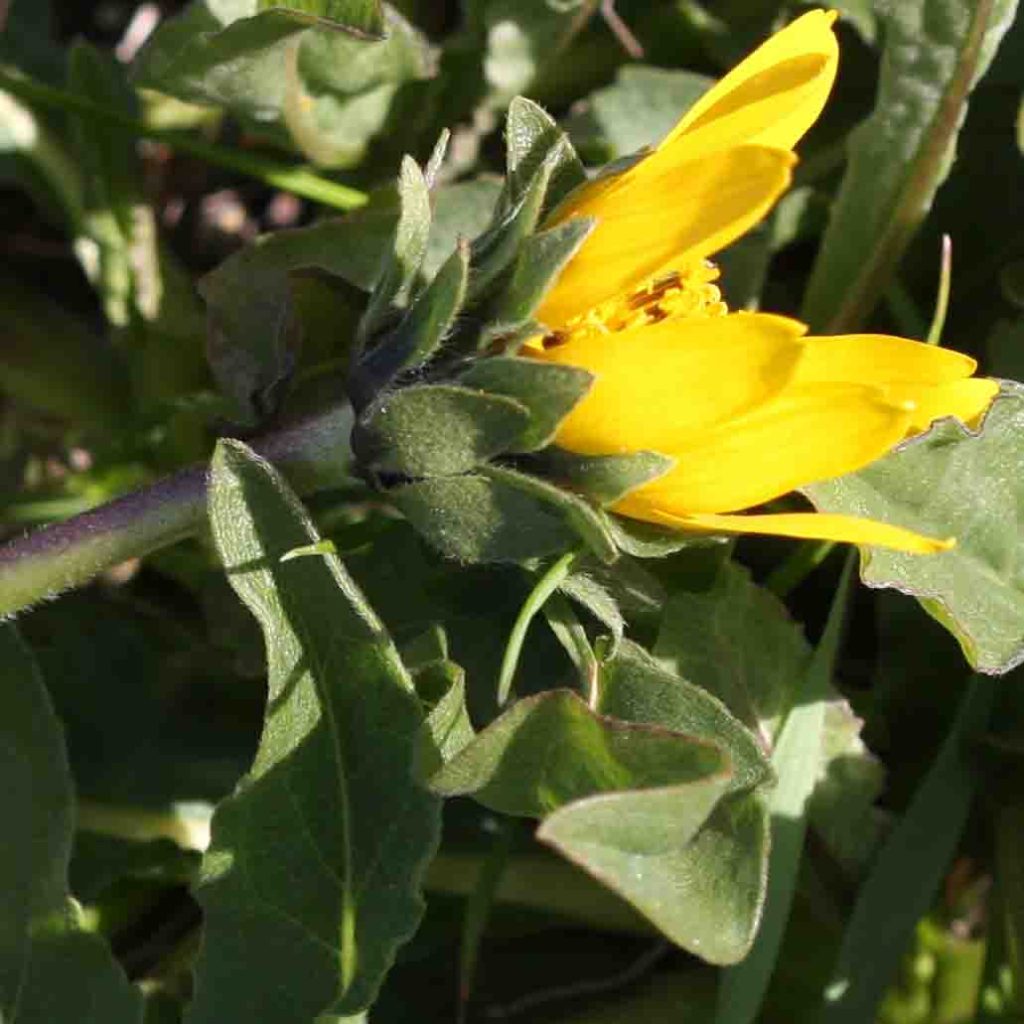 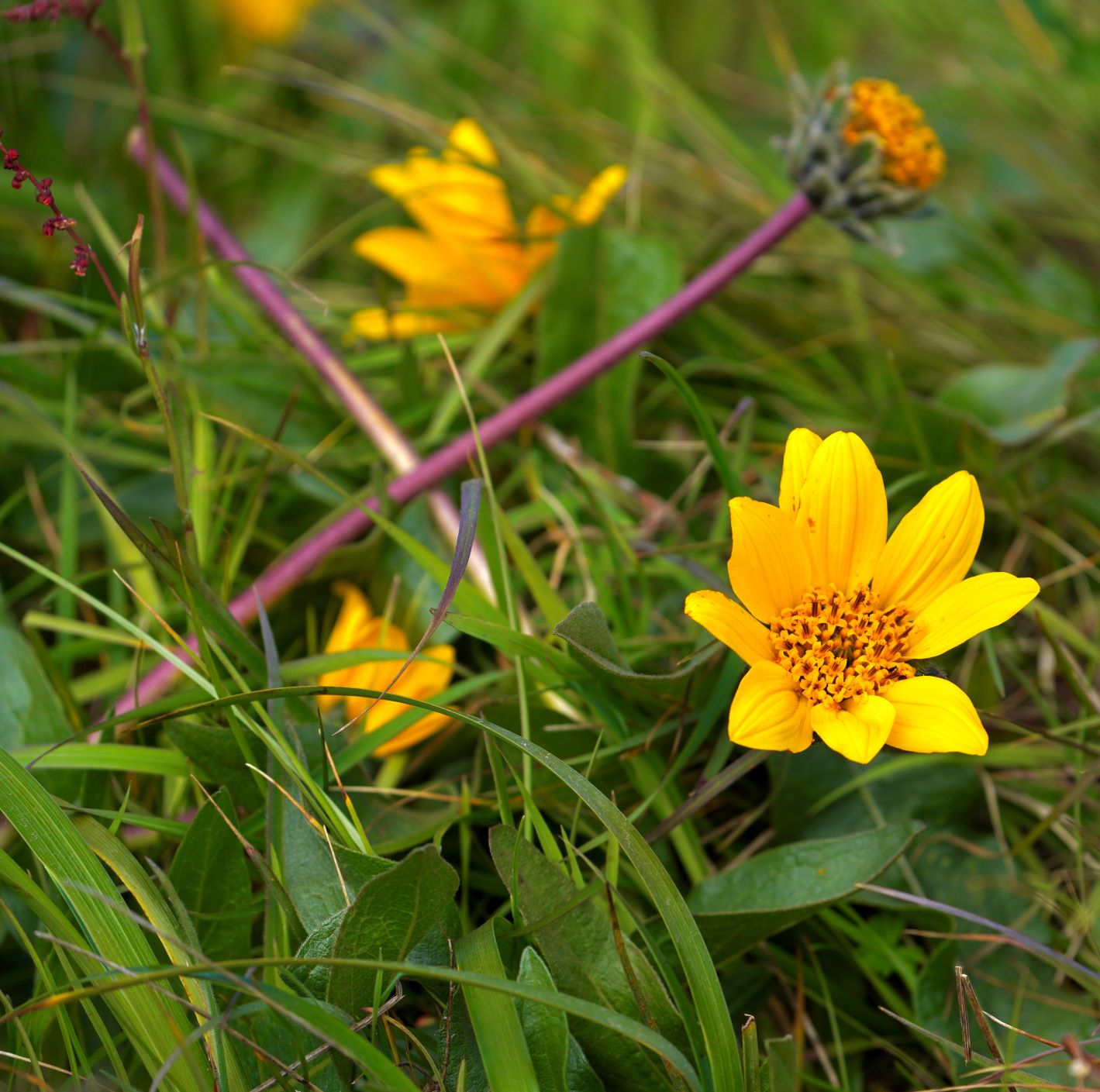 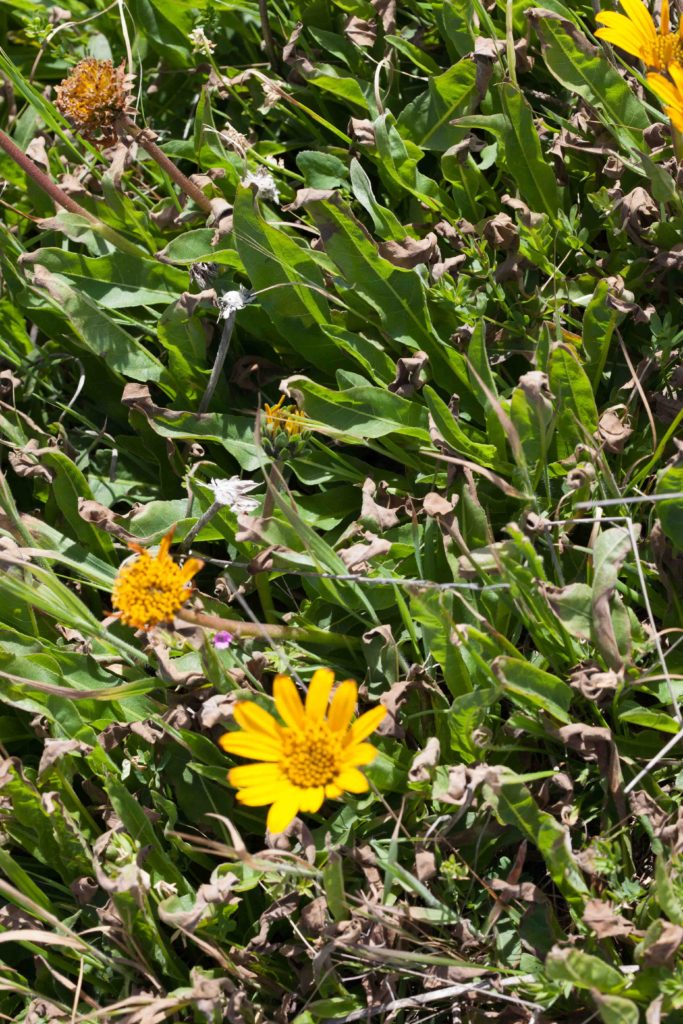 The flowers of this species are larger than those of the Narrow-leaved Mule Ears (Wyethia angustifolia, see above), with 12–27 rays, each 25–50 mm long.  The phyllaries are equal to or longer than the ray flowers, lanceolate with acute or obtuse tips.  The phyllaries and the large leaves are smooth and hairless; the size and shape of the leaves amply justify the plant’s common name. 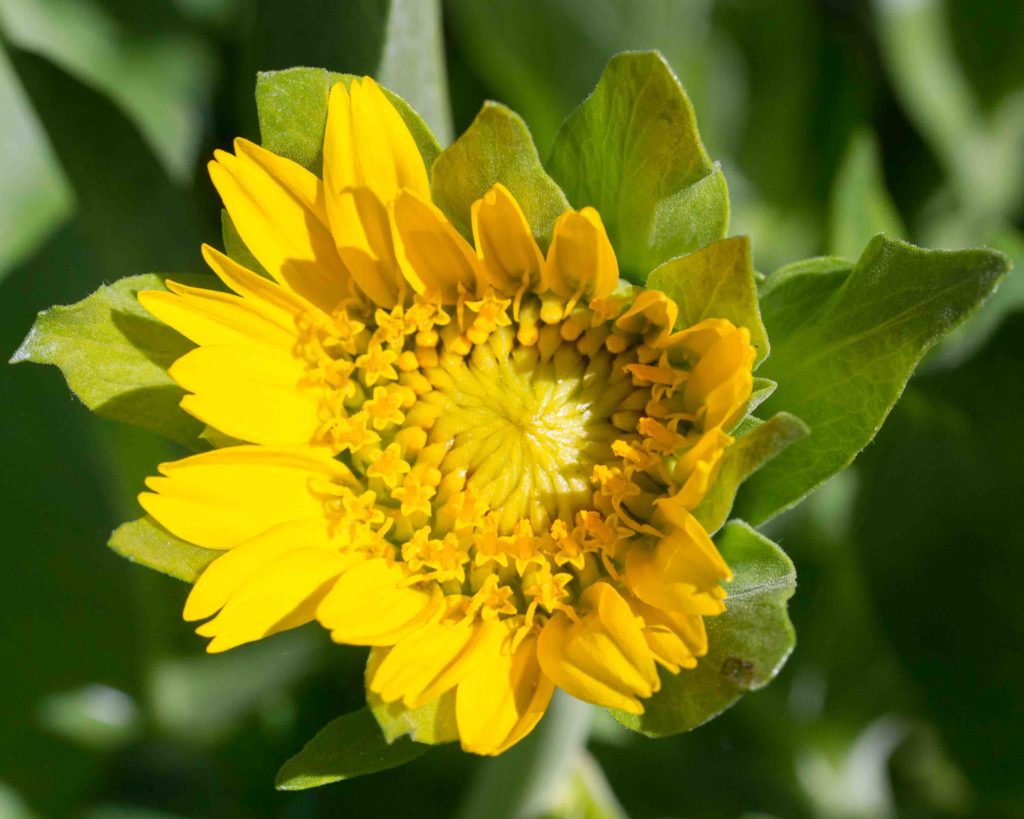 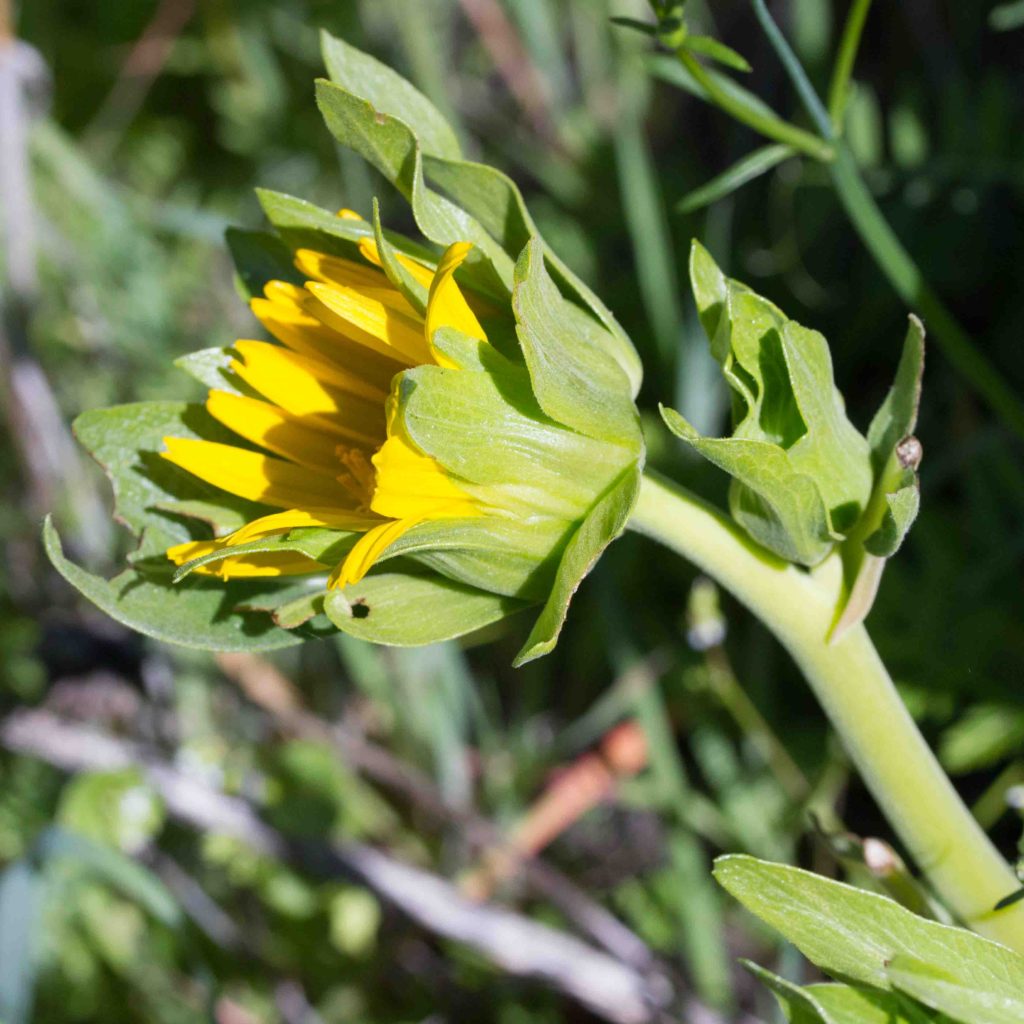 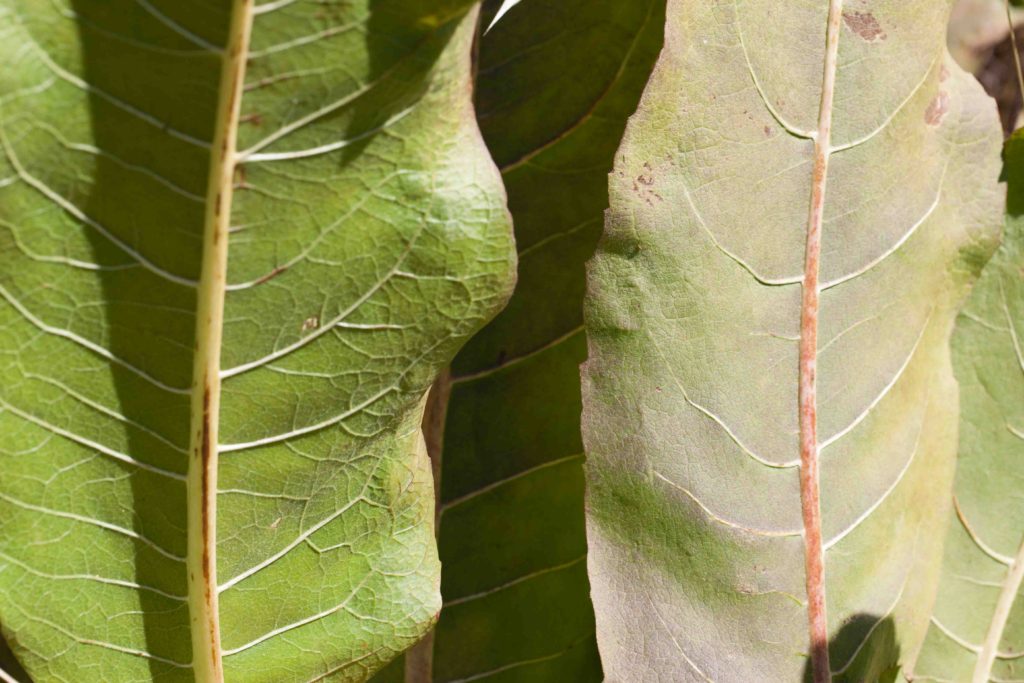 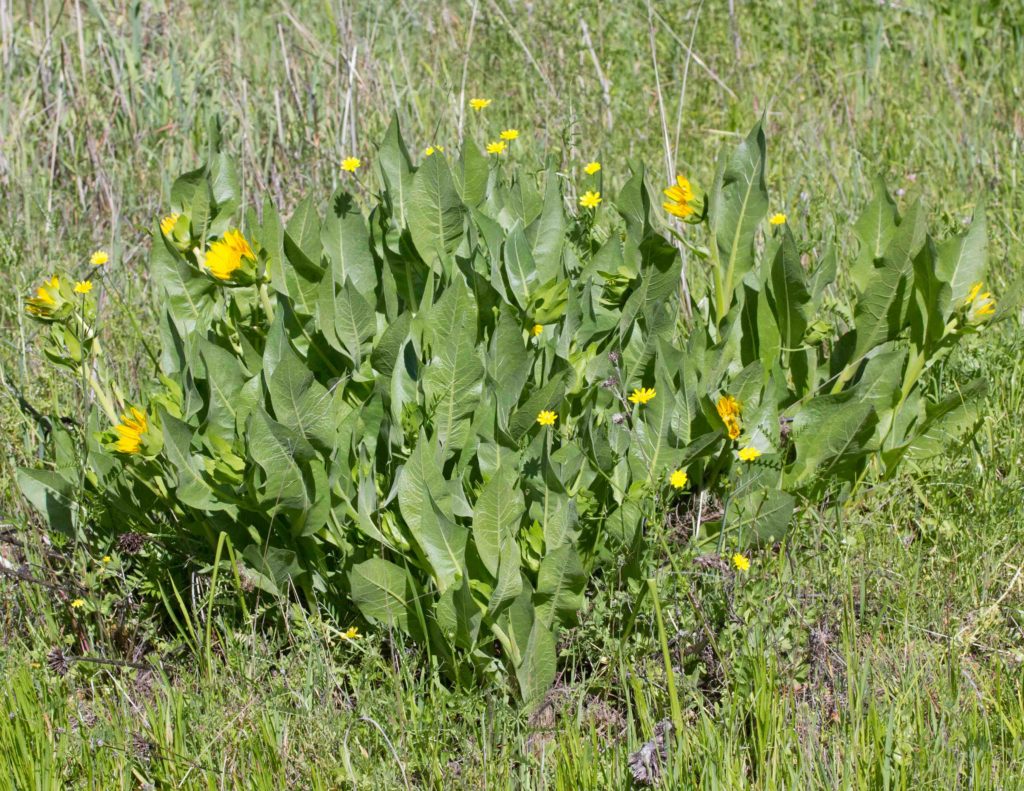 Very similar in appearance to Smooth Mule Ears (Wyethia glabra, see above), but the leaves are slightly hairy on the upper side, and tomentose (felty) on the underside.  Since the leaves become glabrous with age, a more reliable distinction lies in the phyllaries, which are consistently tomentose and slightly different in shape (narrowly ovate as against lanceolate, though in practice it can be hard to see the difference).  The phyllaries are equal to or longer than the ray flowers. 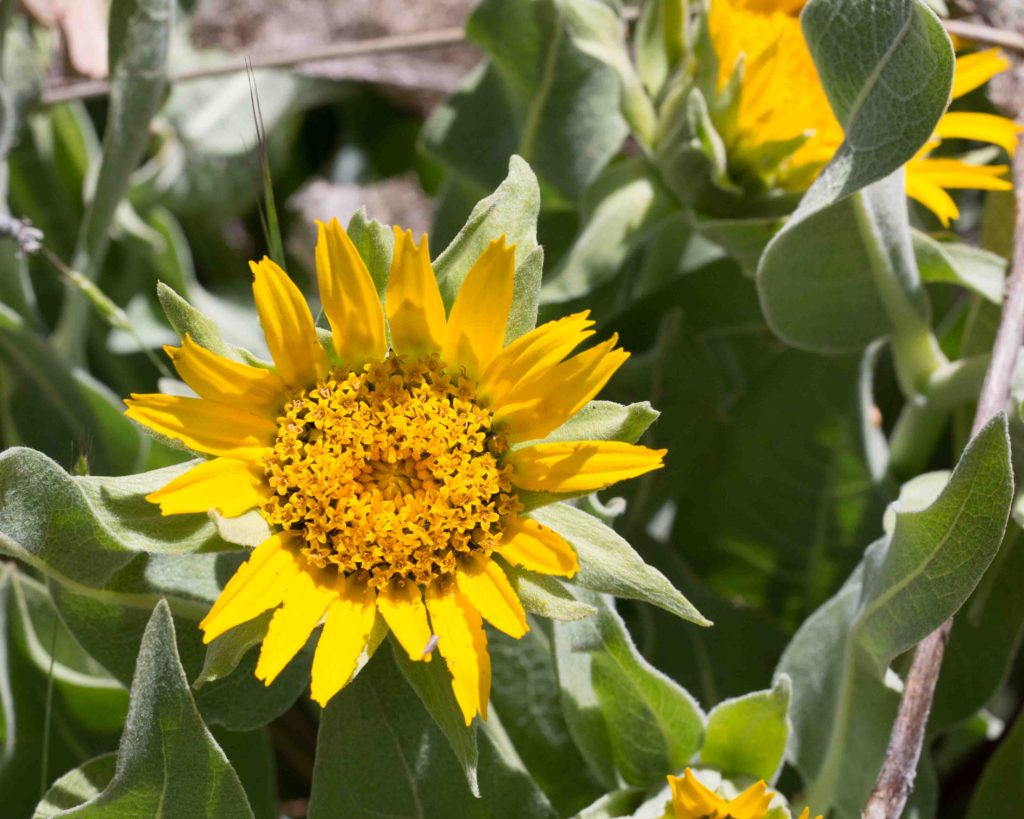 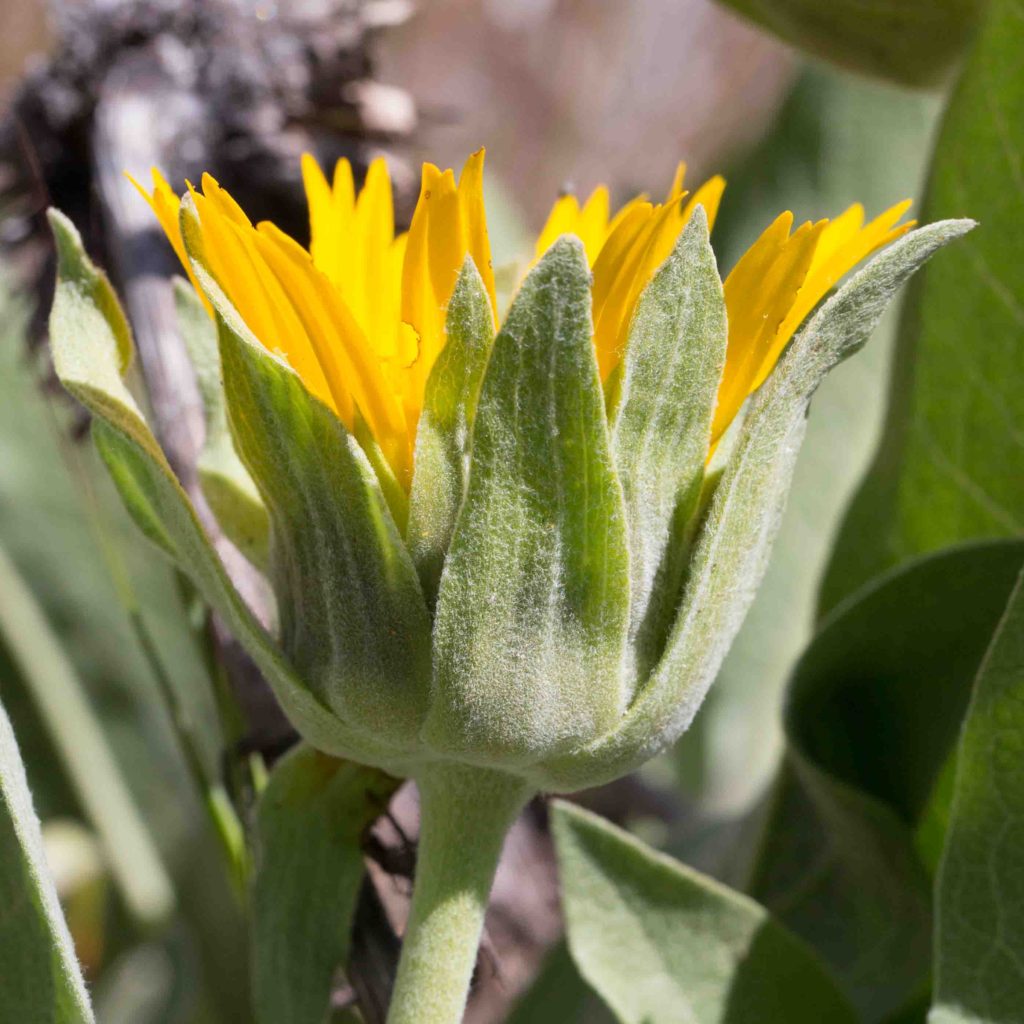 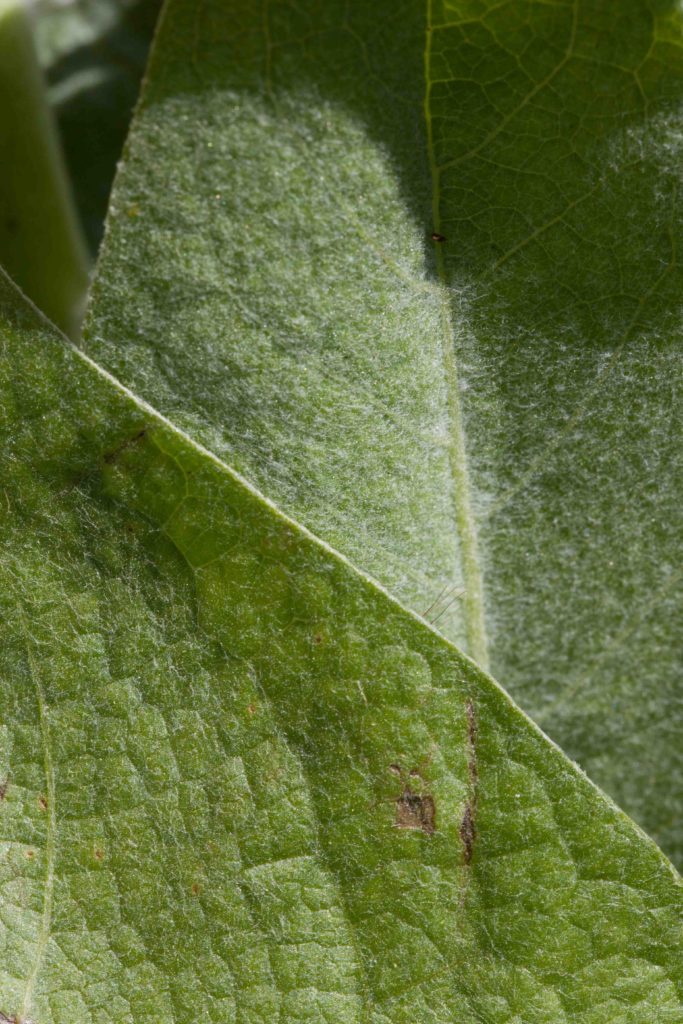 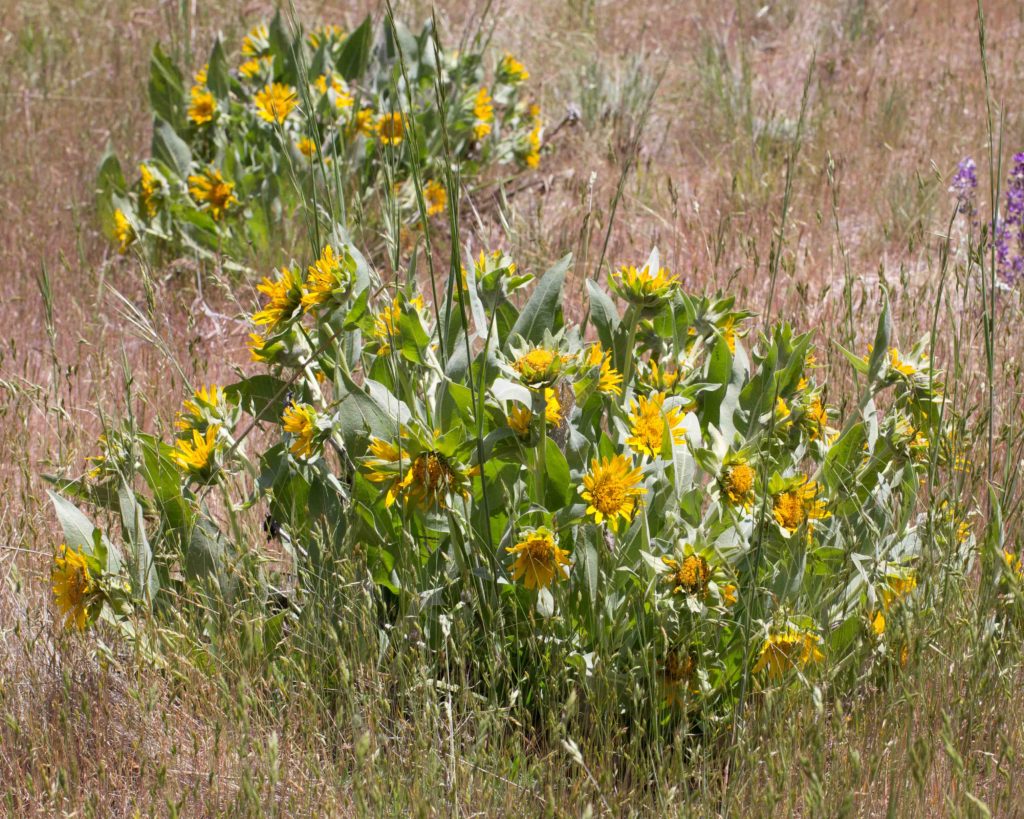