Members of the mustard family all have four petals, usually in a cruciform shape (hence Cruciferae; the old name for the family).  With some groups (particularly the mustards themselves (Brassica, Hirschfeldia, Sisymbrium, Caulanthus and Turritis)), it is necessary to pay close attention to the fruits.  Fruits in the Mustard family are of two kinds, siliques and silicles.  Siliques are typically at least 2 x as long as they are wide and silicles are not. Some siliques are more or less cylindric, others (as in the Wild Radish) are noticeably fatter at the base and taper towards the tip.  Some silicles are erect and appressed to the stem, others grow outwards and curve upwards or outwards and curve downwards.  Recognizing these different characteristics makes it much easier to identify species which may have very similar flowers.

One of the most common shade-loving plants blooming in early spring.  It has loose clusters of pure white (occasionally pink-tinged) 4-petalled flowers on distinct pedicels.  Leaves have 3–5 leaflets of varying shapes, from narrow to arrow-shaped though broad to rounded, sometimes with small but distinct lobes. 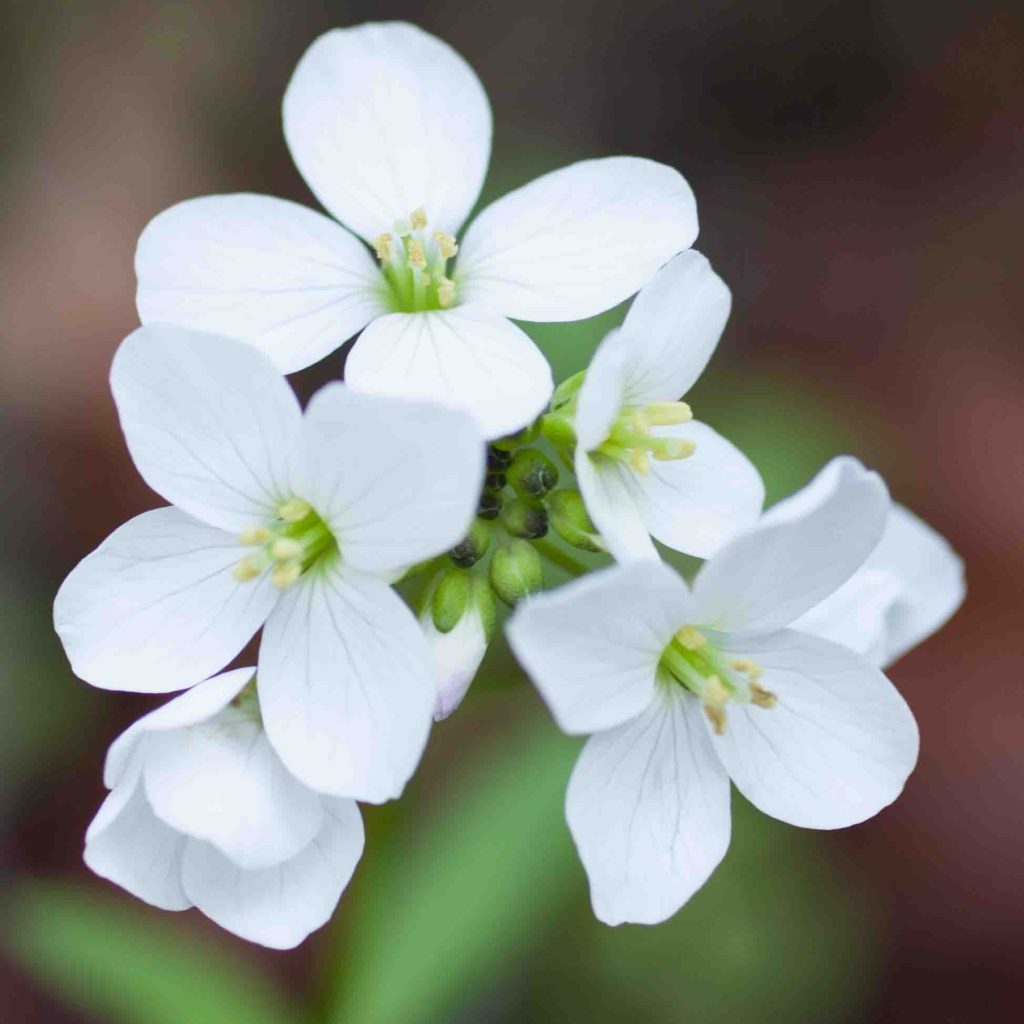 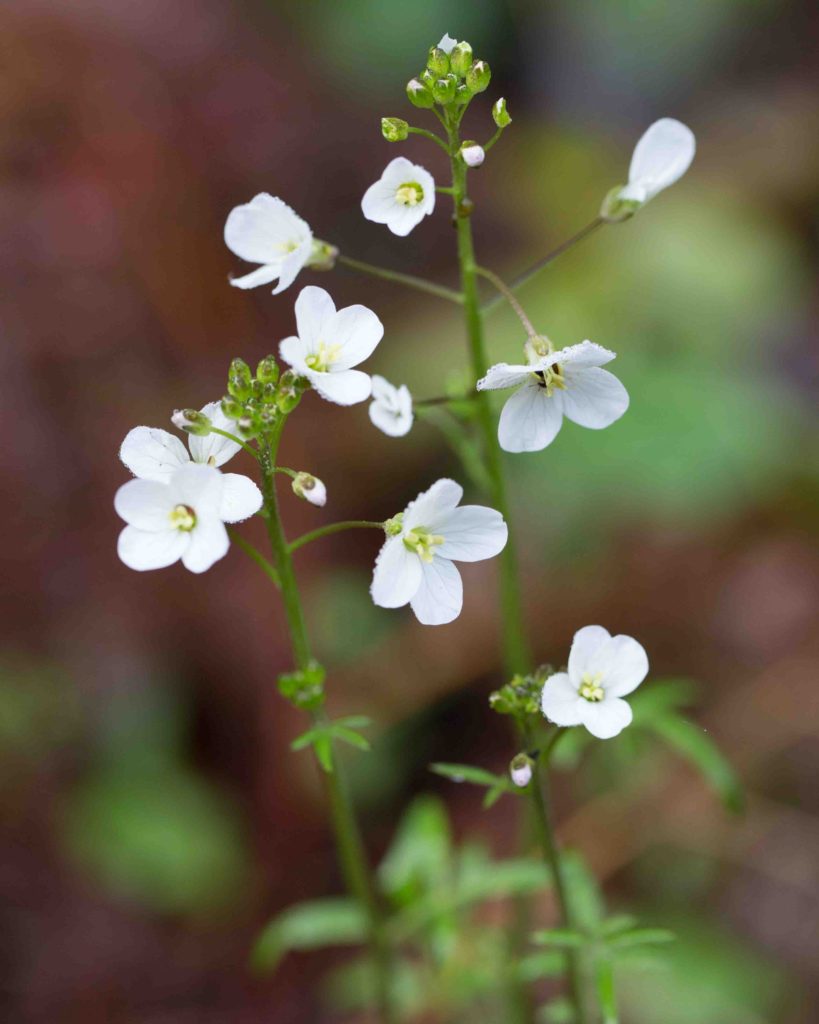 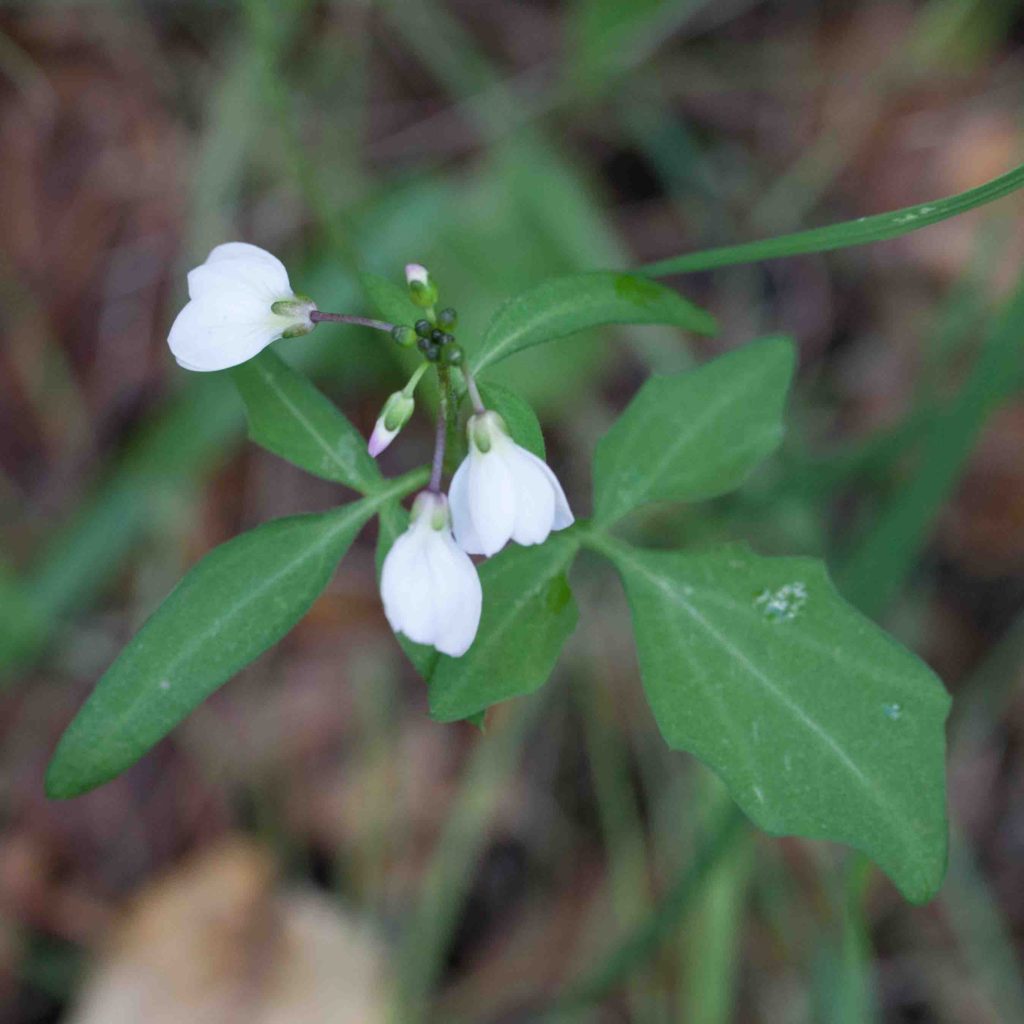 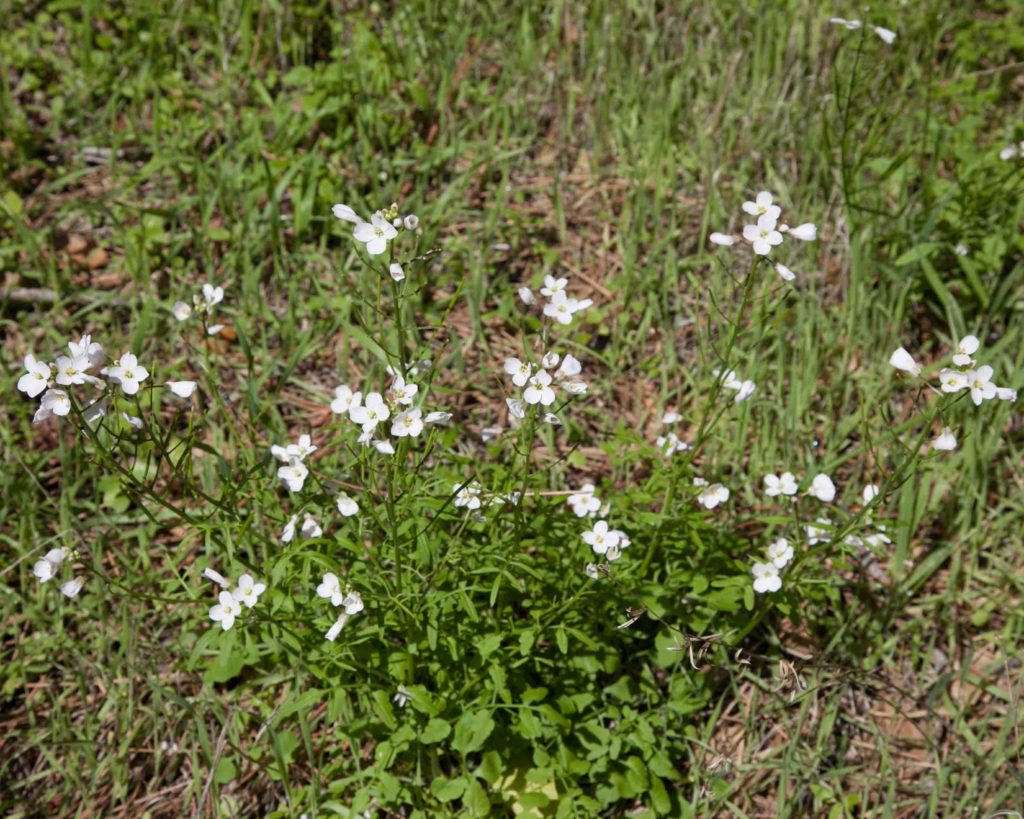 This is a common weed with tiny white flowers.  The petioles of its leaves have hairy margins.  The basal leaves are round to kidney-shaped (see right photo), with cauline leaves smaller and sometimes narrower.  It is similar to Western Bitter-cress (Cardamine oligosperma), but most easily distinguished by a close examination with a hand lens.   Western Bitter-cress is not illustrated here, but it lacks the petiole hairs.  Also, Hairy has 4 (occasionally 6) stamens, while Western consistently has 6. 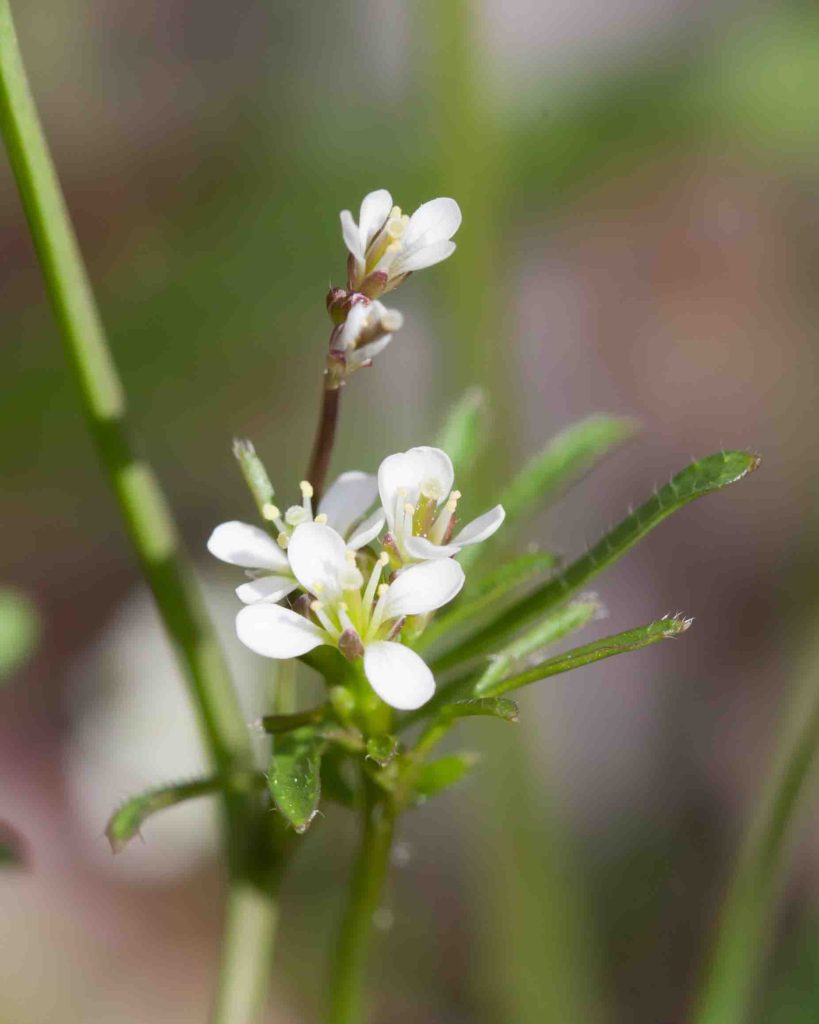 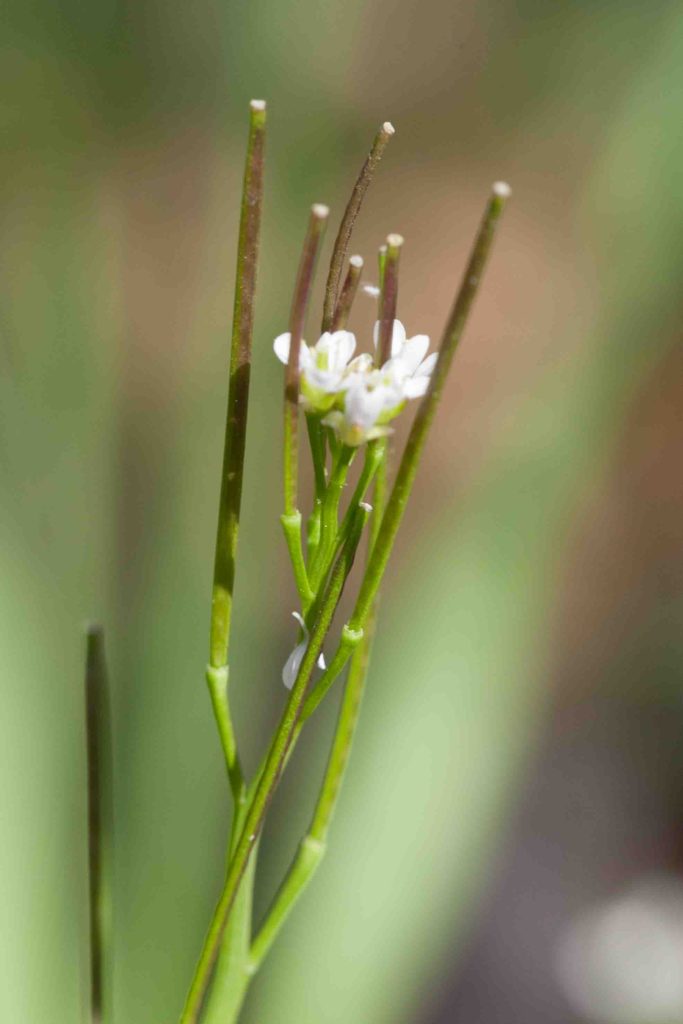 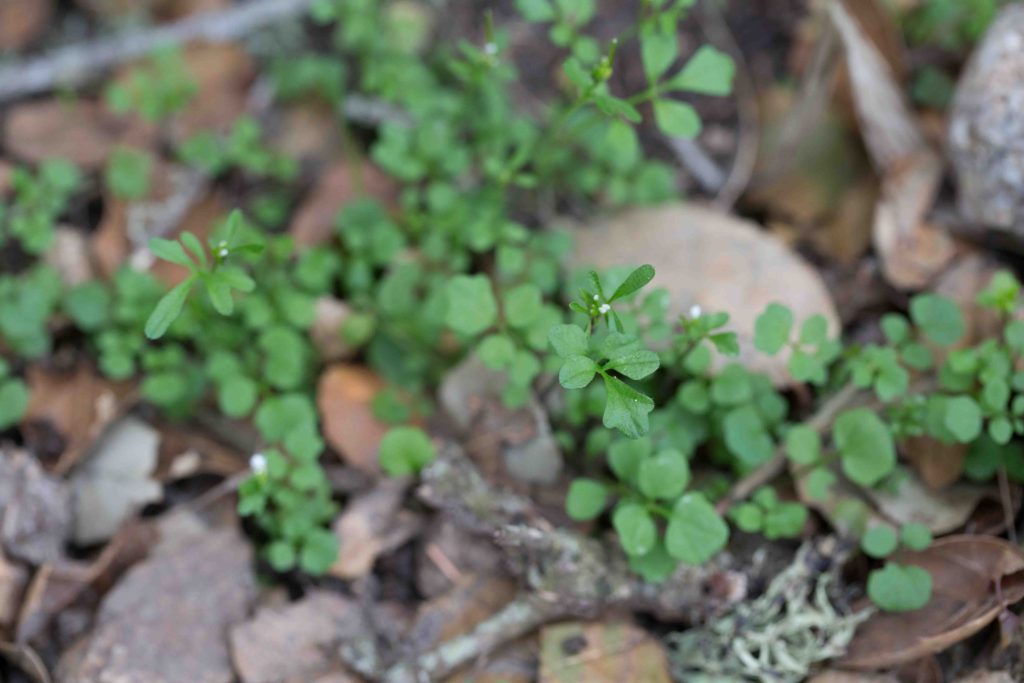 The plant has a stout, erect, branched stem.  Cauline leaves are 3–9 cm long, ovate to obovate and widely spaced. The inflorescence is slightly domed with individual flowers on pedicels of varying lengths. Petals are white, clawed and 2 x sepal length.  Fruits are flat, heart- to kidney-shaped, the top neither winged not notched. 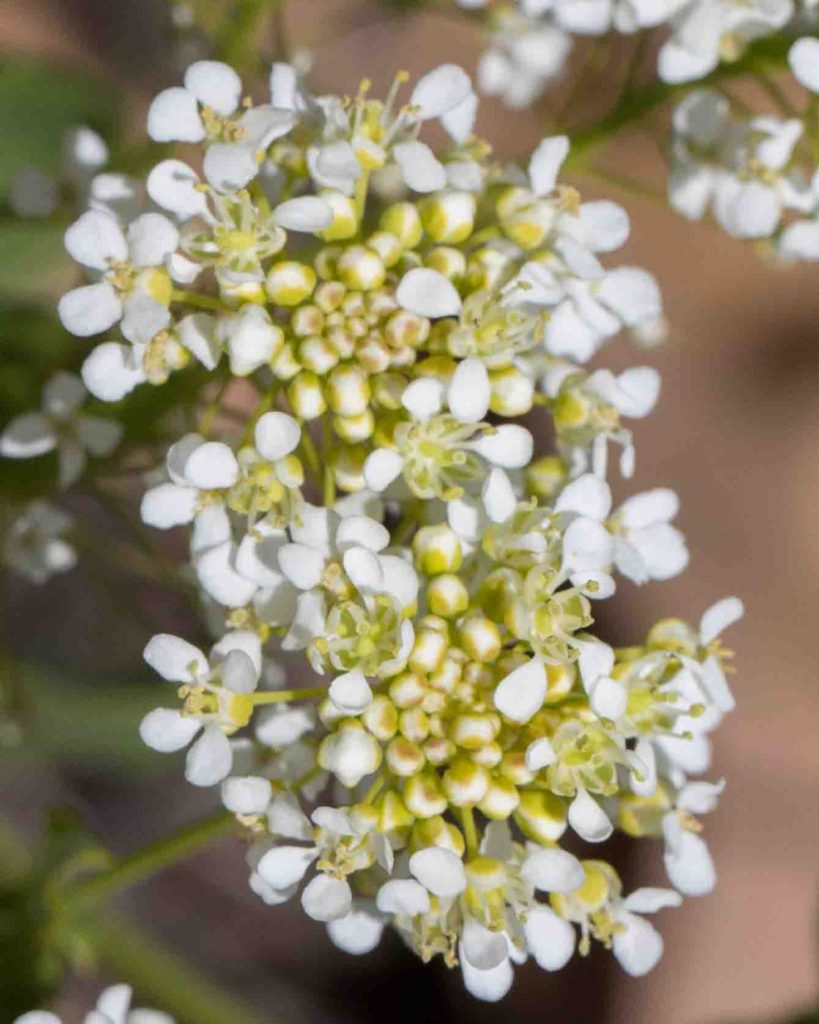 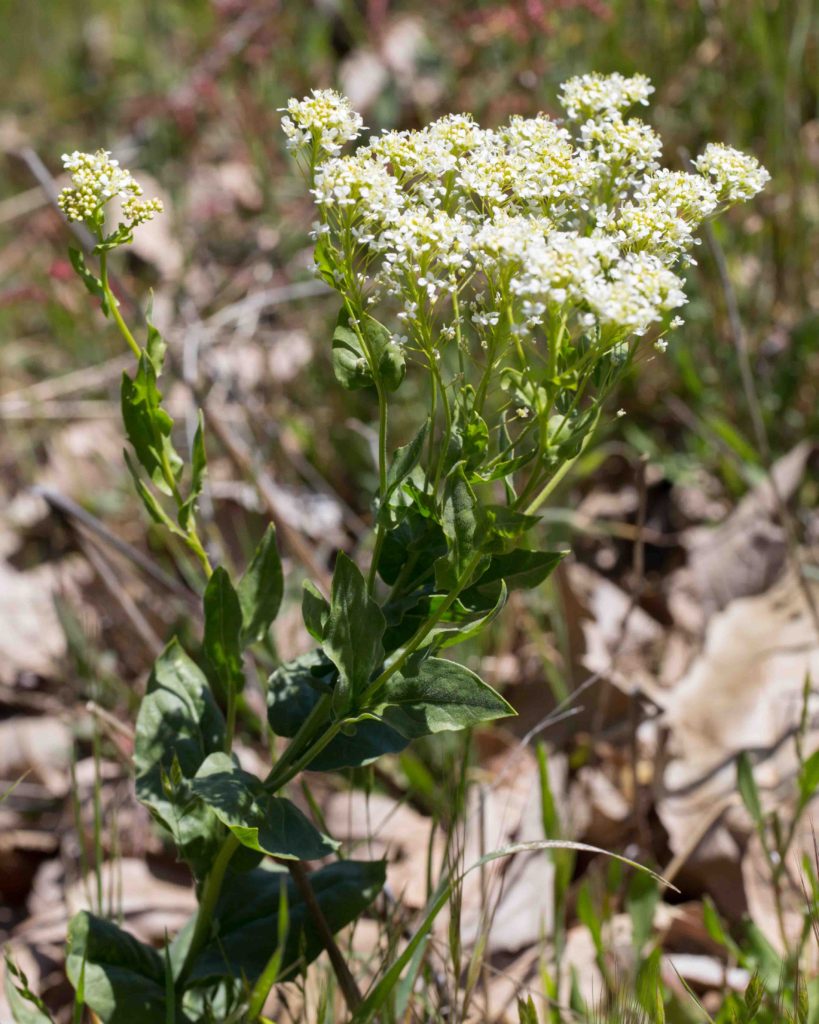 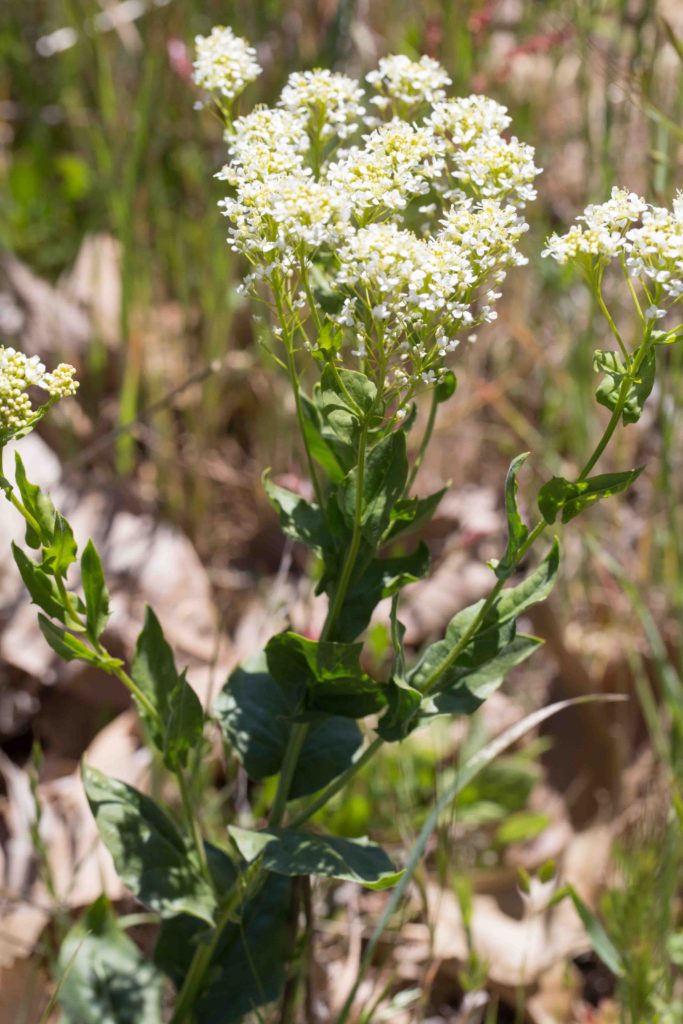 An uncommon cress, found on Fort Ord.  It has diminutive white flowers with 6 stamens and 4 petals.  Fruits are spreading to ascending, cylindric siliques, 1–5 cm long, hairless and unsegmented, borne on  distinct pedicels. It has a well-formed basal rosette of hairy leaves. 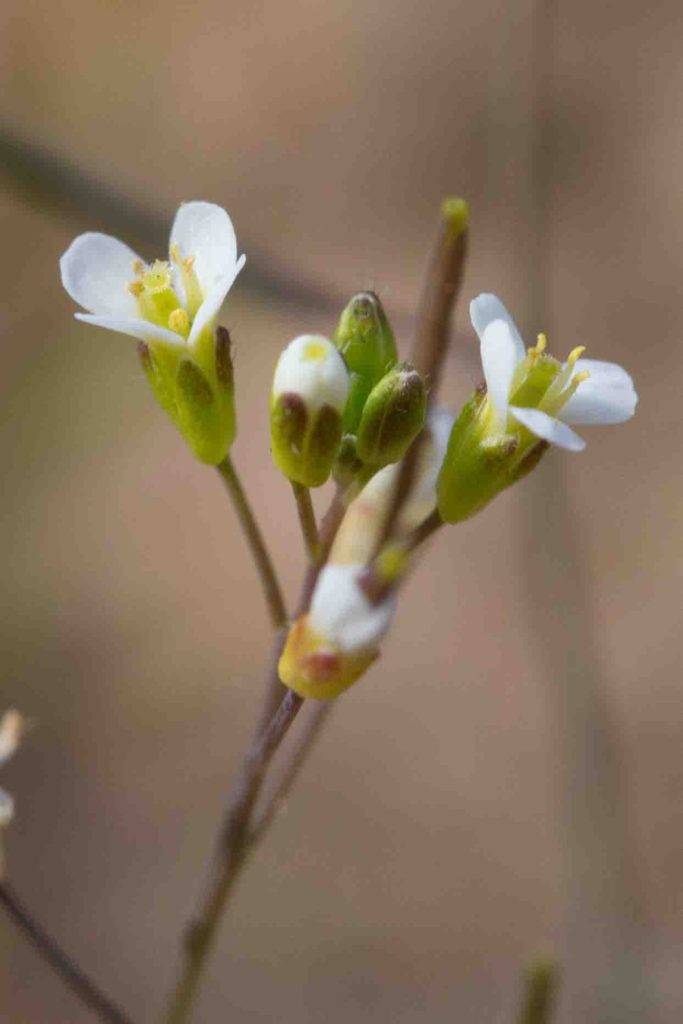 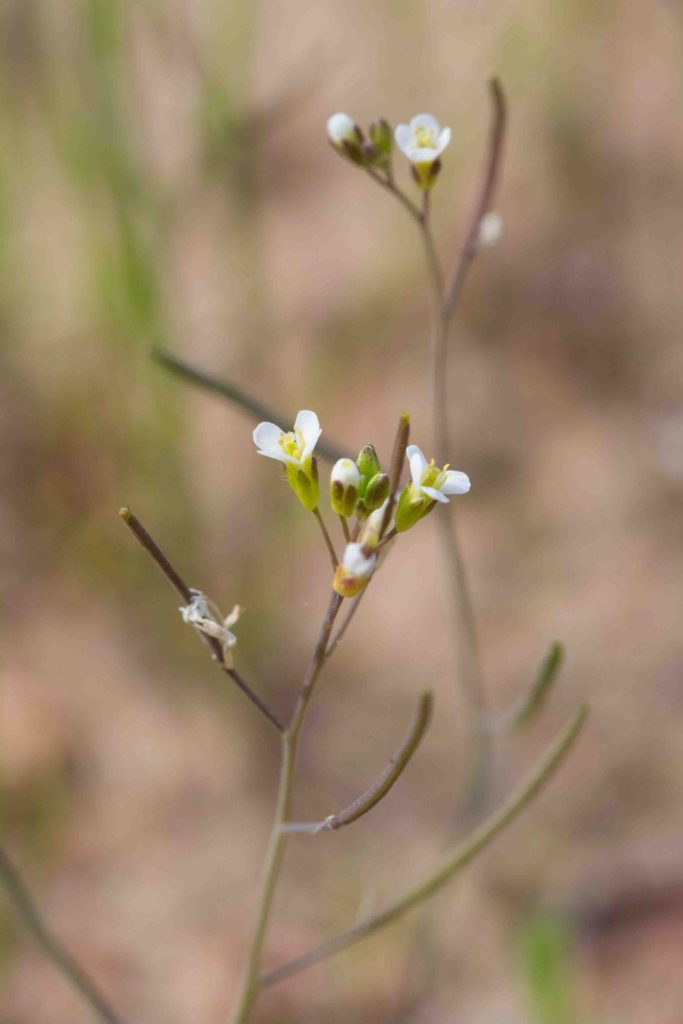 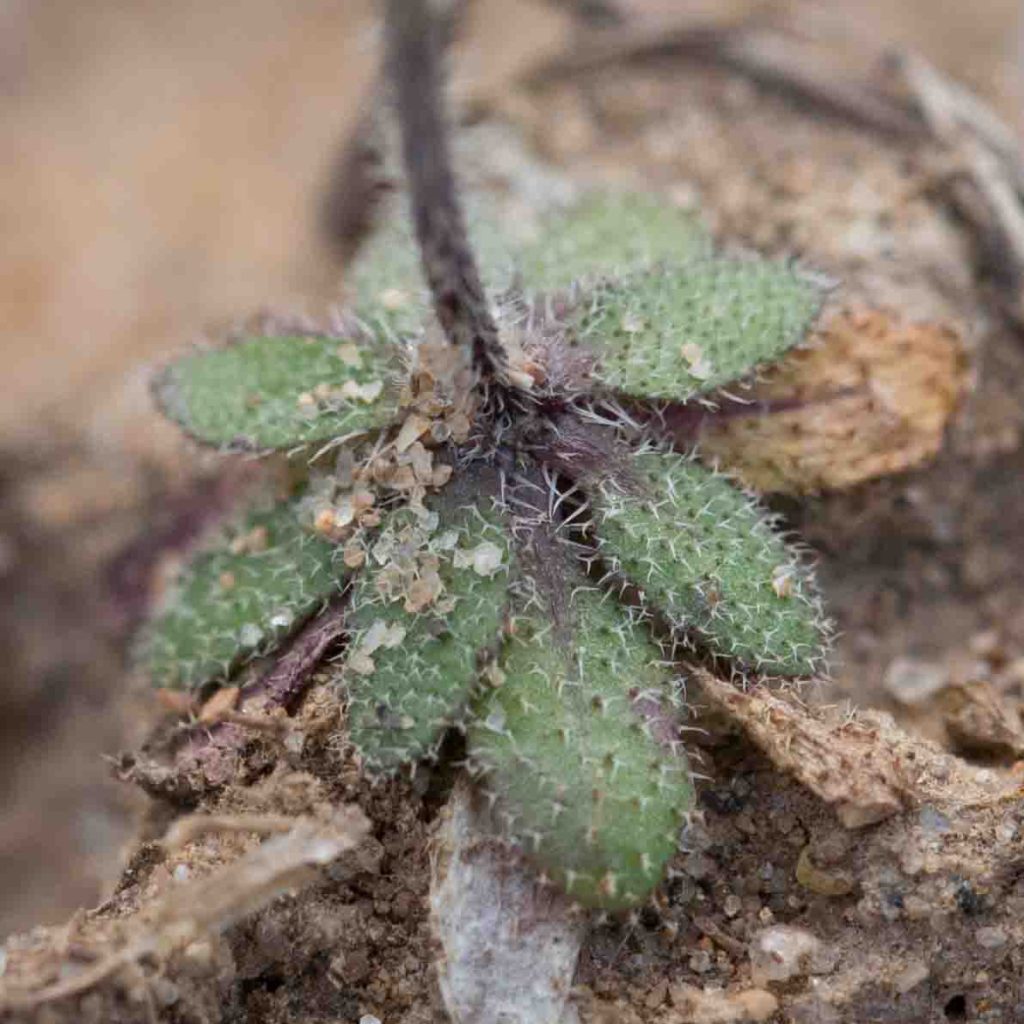 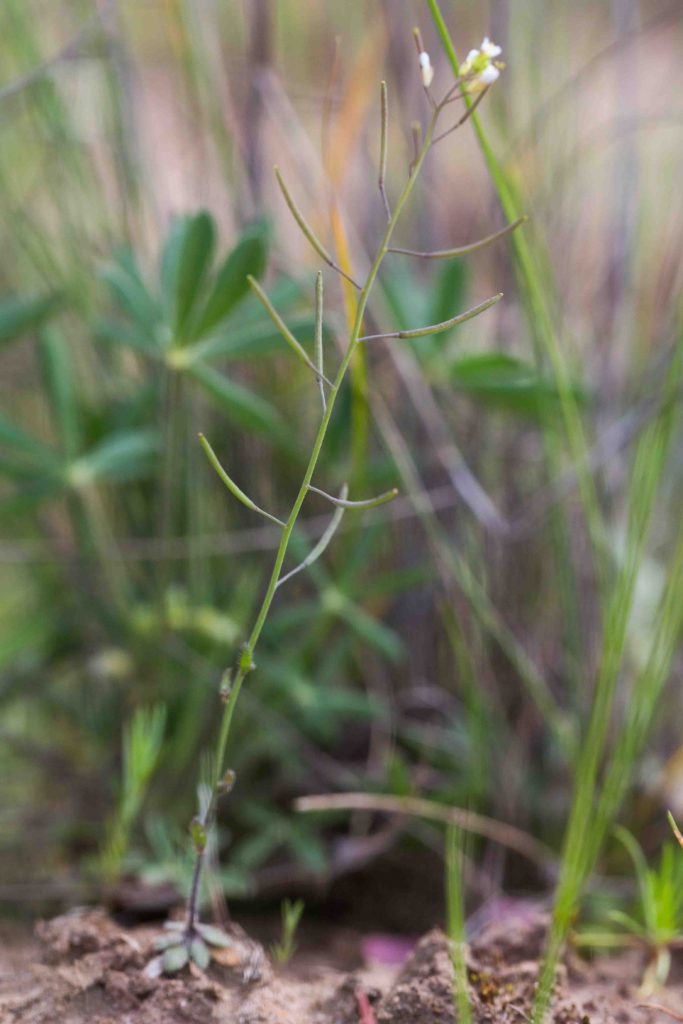 An uncommon cress, to be found on Fort Ord.  Like Mouse-ear Cress (Arabidopsis thaliana), it has diminutive white flowers clustered at the stem tips, each with 6 stamens and 4 unequal petals.  The fruit is a silicle (quite different from the siliques found on Mouse-ear Cress), heart-shaped to round with a shallow notch at the tip.  There are two seeds in each chamber (an important diagnostic feature).  Leaves are in a well-formed basal rosette, glabrous and entire or irregularly lobed. 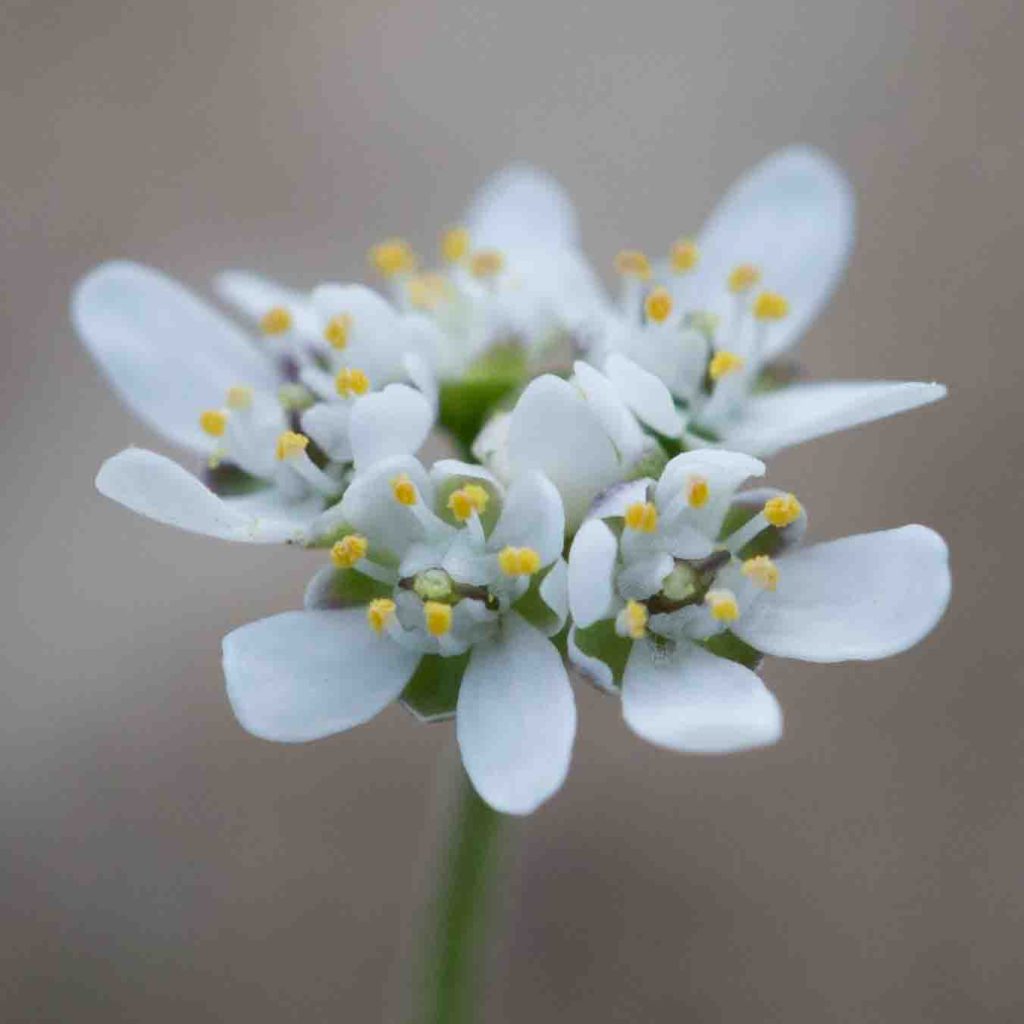 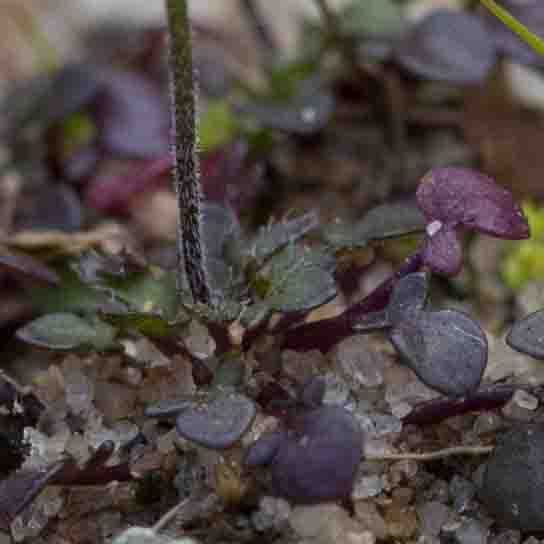 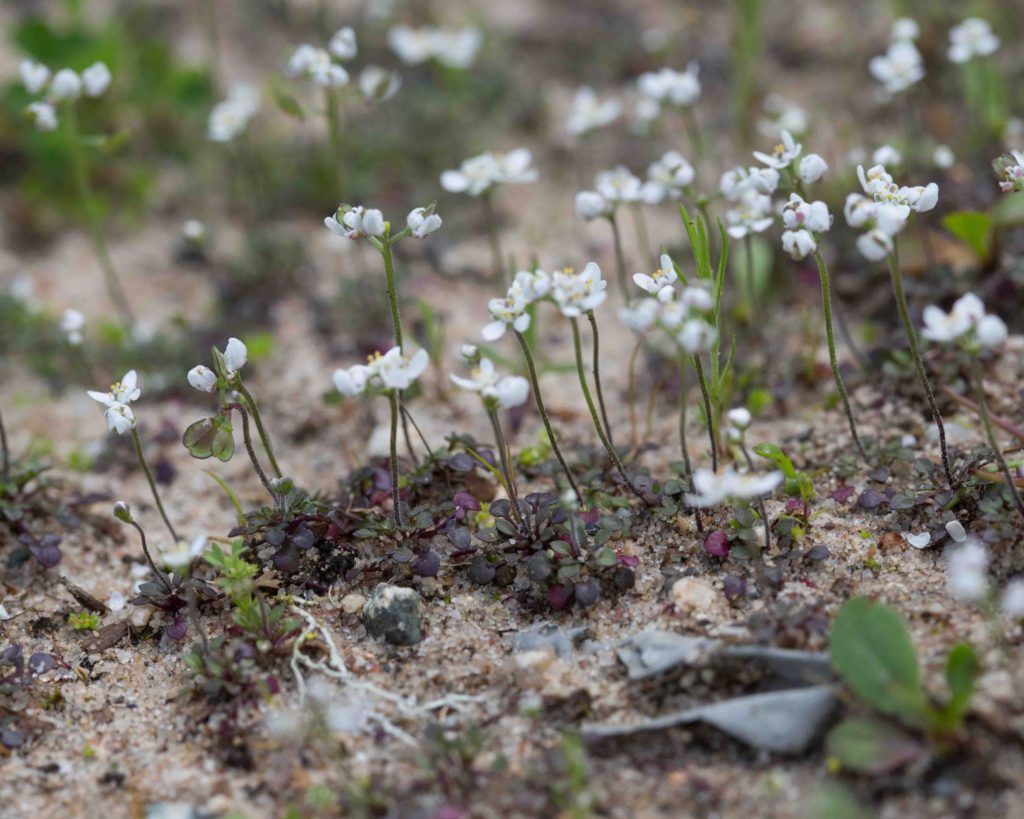 Commonly found in or by streams in sometimes dense mats, this has small clusters of white flowers. Stems can be long but are weak and mostly prostrate, rooting at nodes. Leaves are pinnately parted with 3–9 round to lanceolate leaflets which have a peppery taste. Fruits are cylindric siliques, straight or up-curved and narrowed between individual seeds. 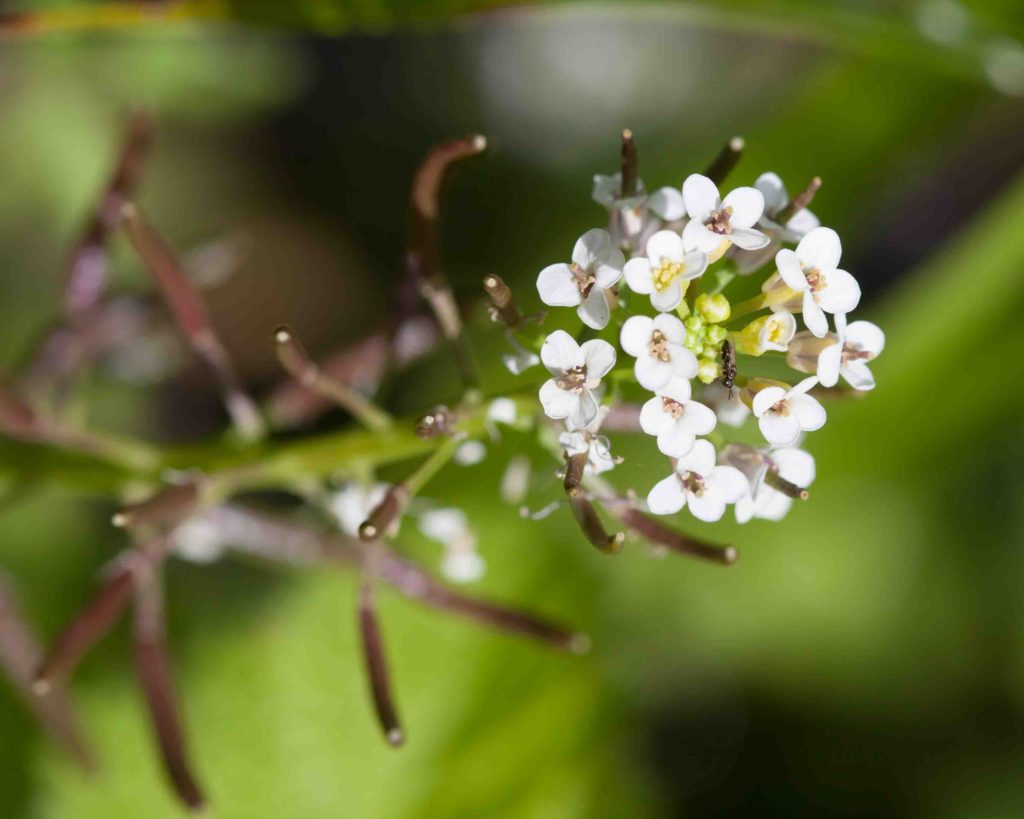 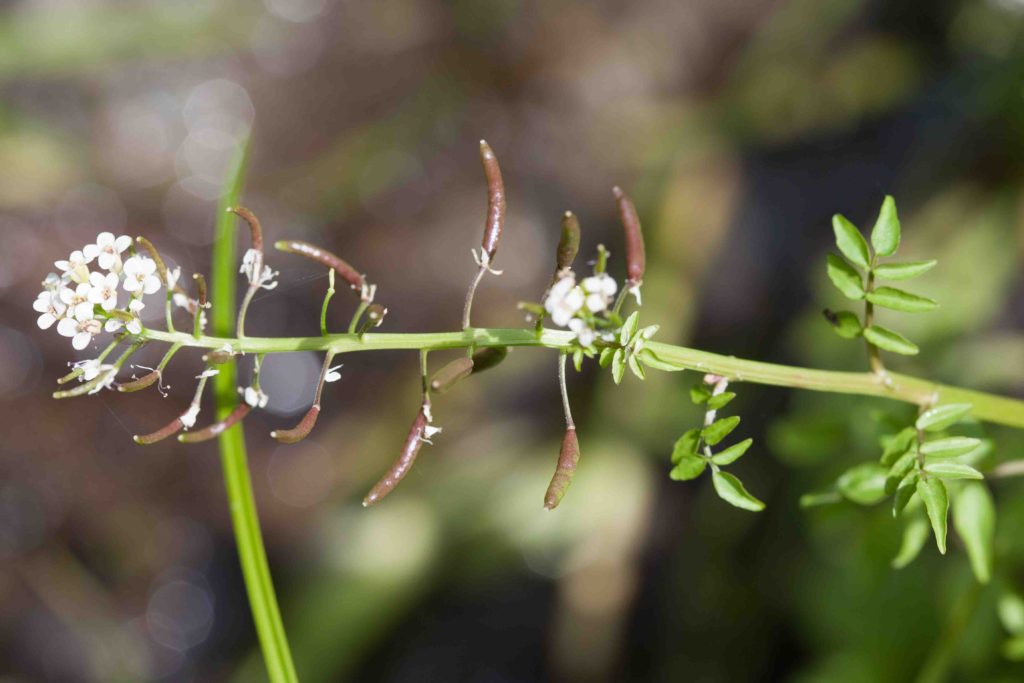 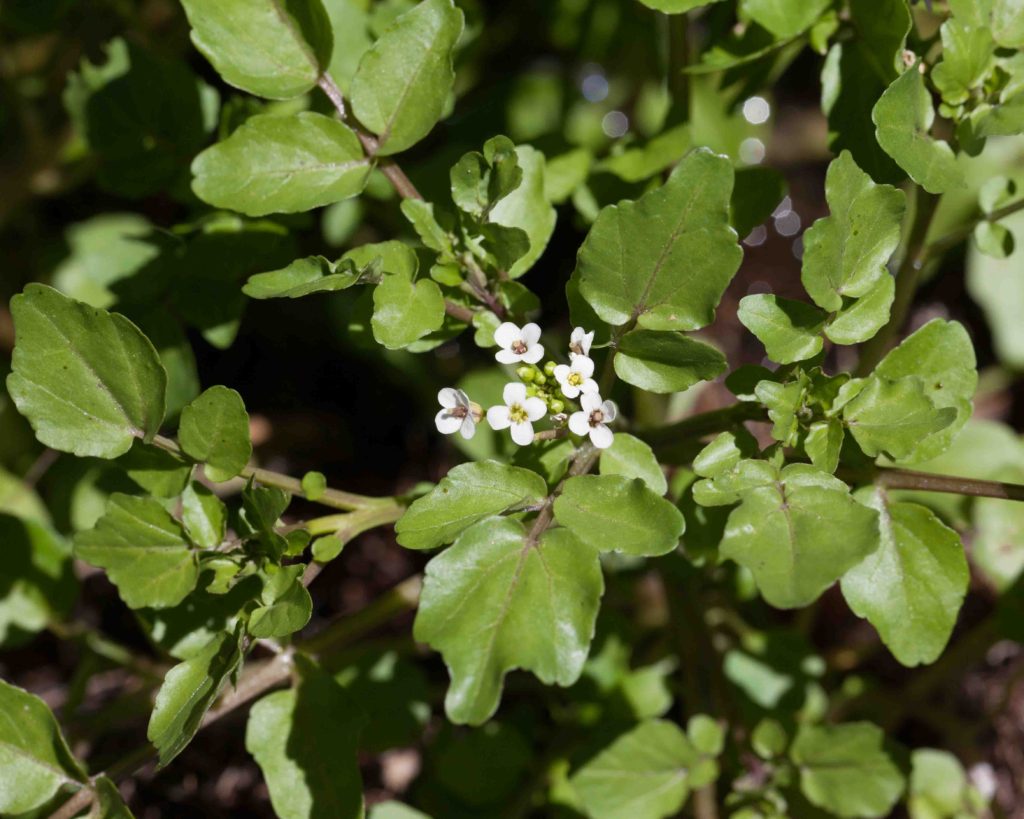 Much branched from its base. The basal leaves are not rosetted and are noticeably toothed.  Cauline leaves are pinnately lobed. The inflorescence is elongated. The conspicuously upturned siliques are distinctive, giving the species its scientific name. 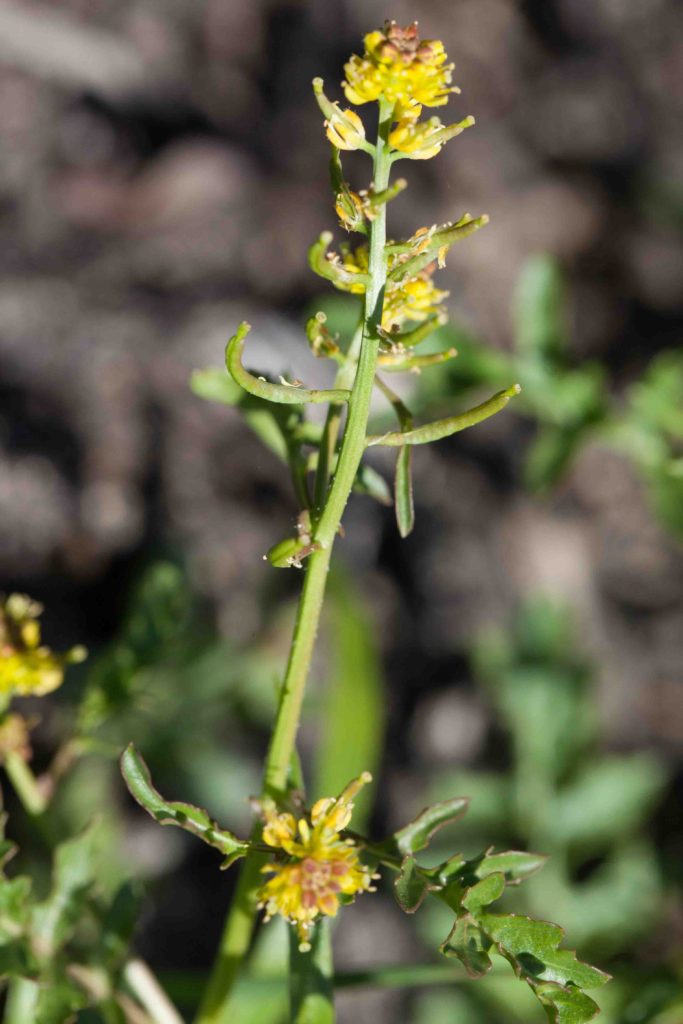 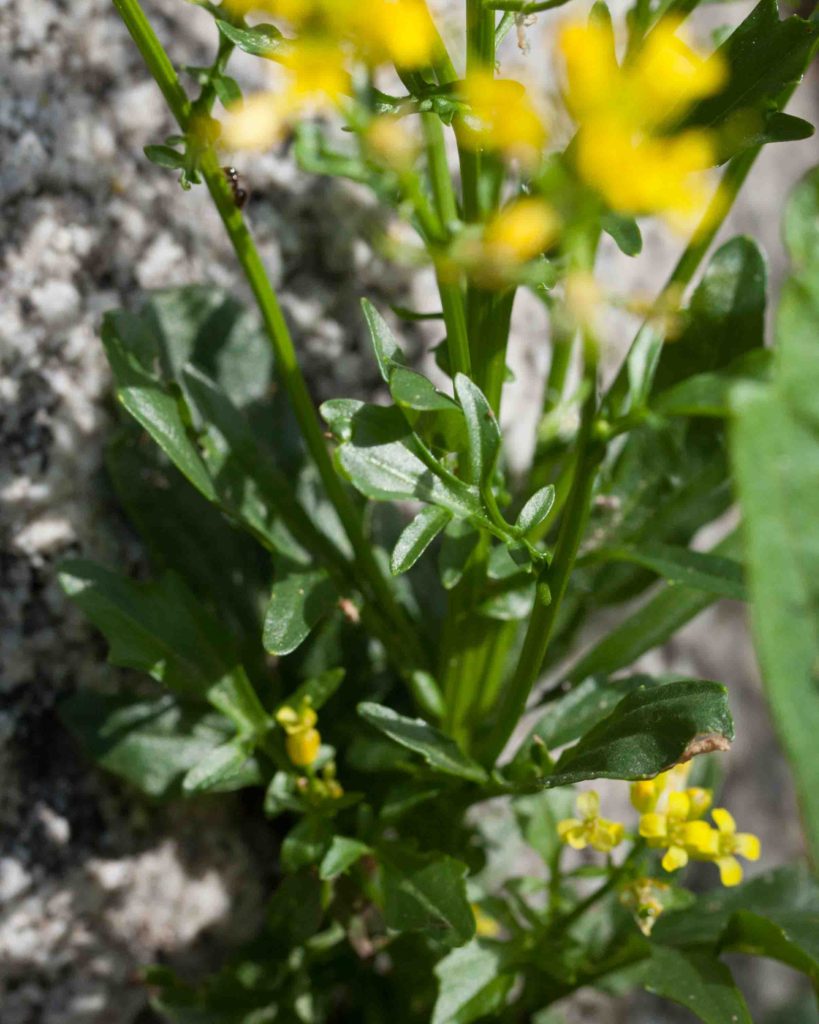 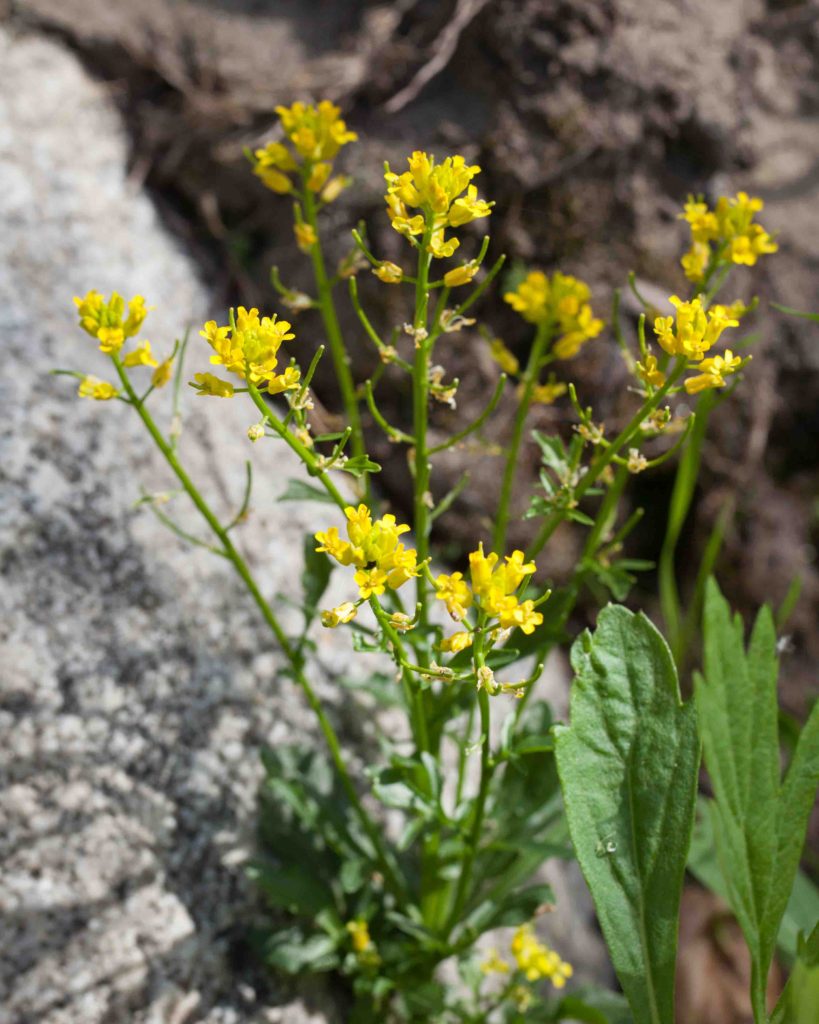 Closely related to the mustards but the glabrous leaves and the pinnately lobed leaves subtending the flower heads are distinctive as is the vivid green coloring. There is also a basal rosetted of leaves with 2–4 pairs of lobes. 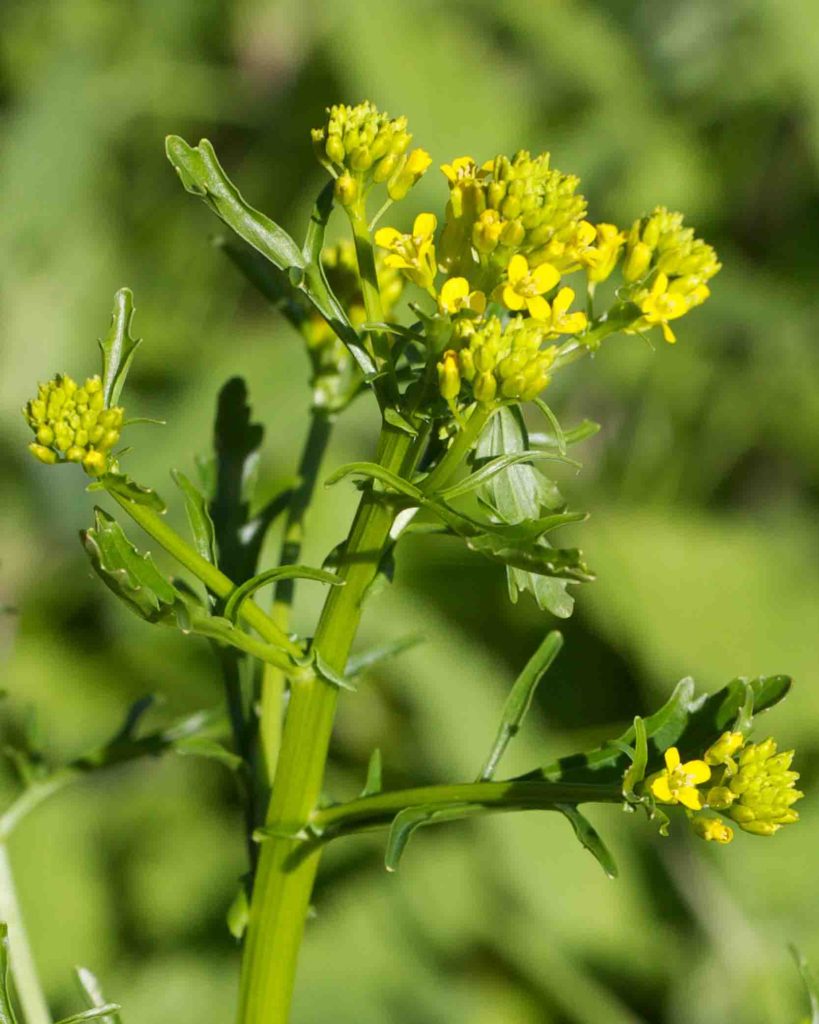 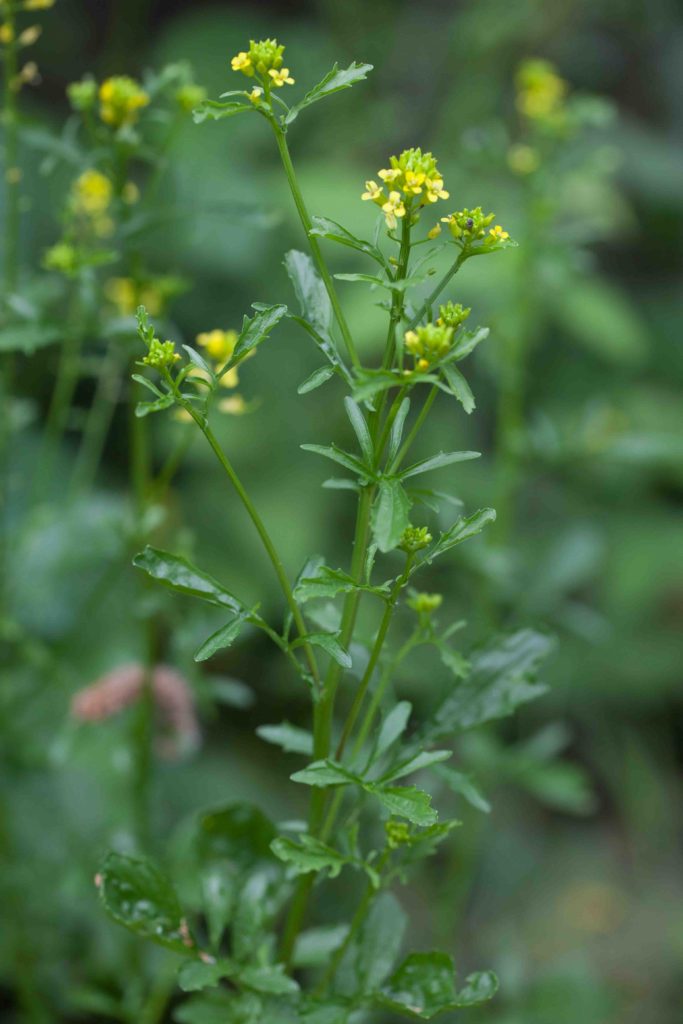 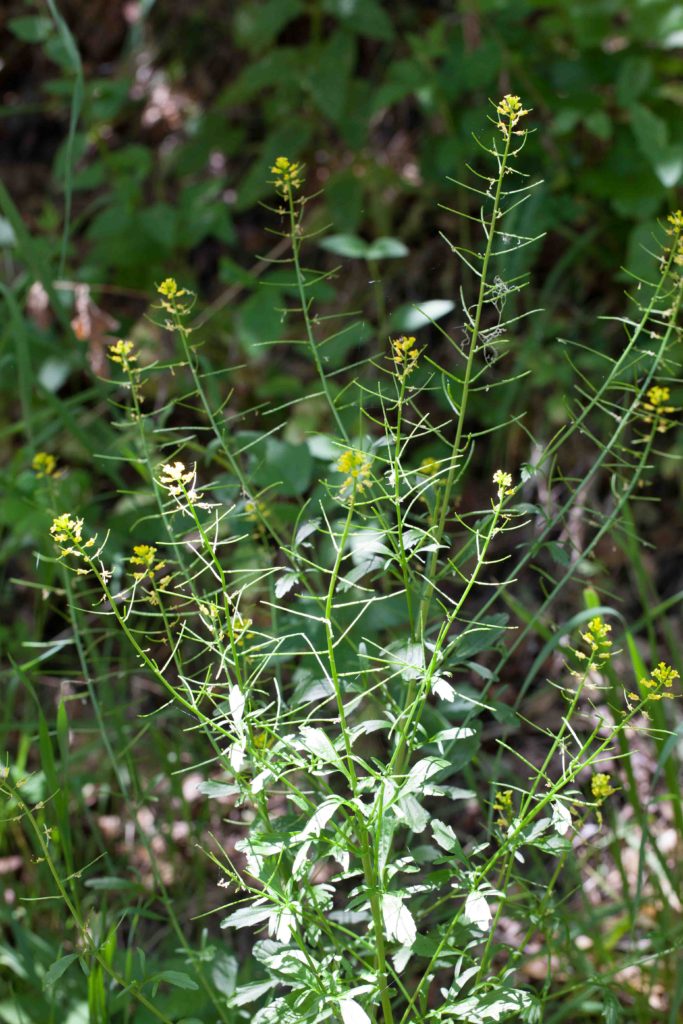 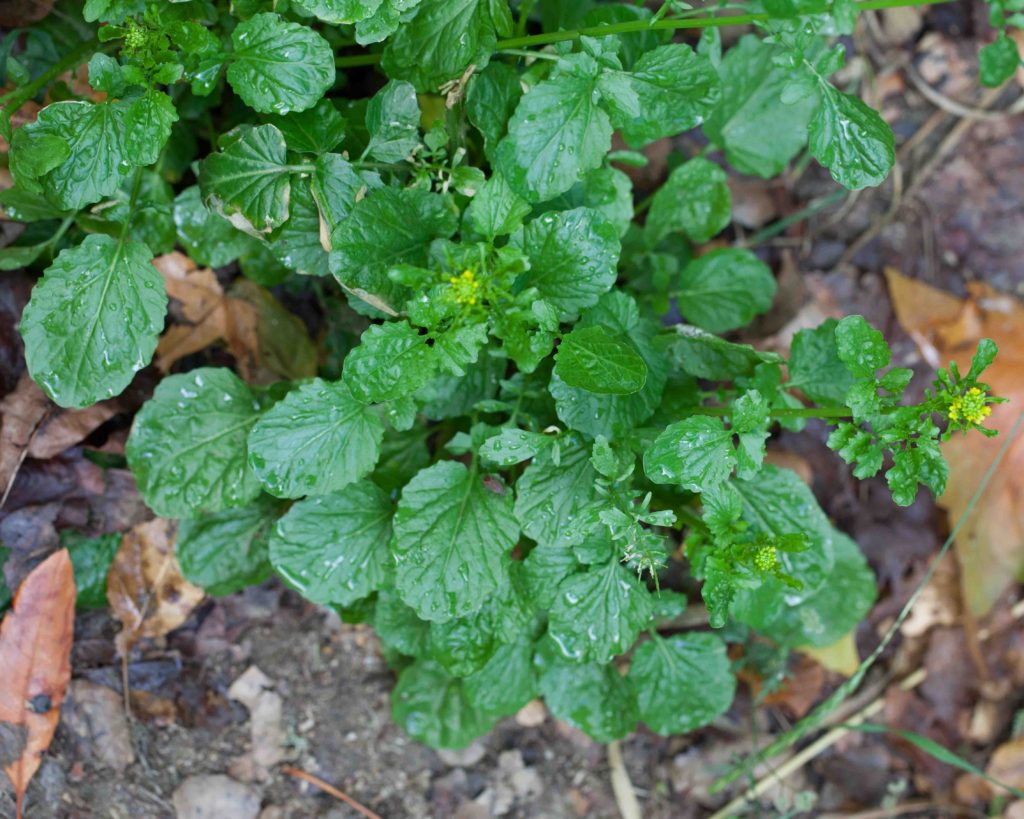