Members of the mustard family all have four petals, usually in a cross shape (hence Cruciferae; the old name for the family).  With some groups, the flowers are quite similar, so it helps to pay close attention to the fruits.  Fruits in the Mustard family are of two kinds, siliques and silicles.  Siliques are at least twice as long as they are wide, while silicles are less elongated.  Some siliques are more or less cylindric, others (as in the Wild Radish) are noticeably fatter at the base and taper towards the tip.  Some silicles are erect and appressed to the stem, others grow outwards and curve upwards, or outwards and curve downwards.  All the plants on this page have more or less flattened silicles, of different shapes and degrees of hairiness, some notched at the tip, some not.

A very common weedy cress, distinguished by its heart shaped fruits.  When ripe, these split down the middle, releasing yellow seeds which are sometimes likened to golden coins in a shepherd’s purse. 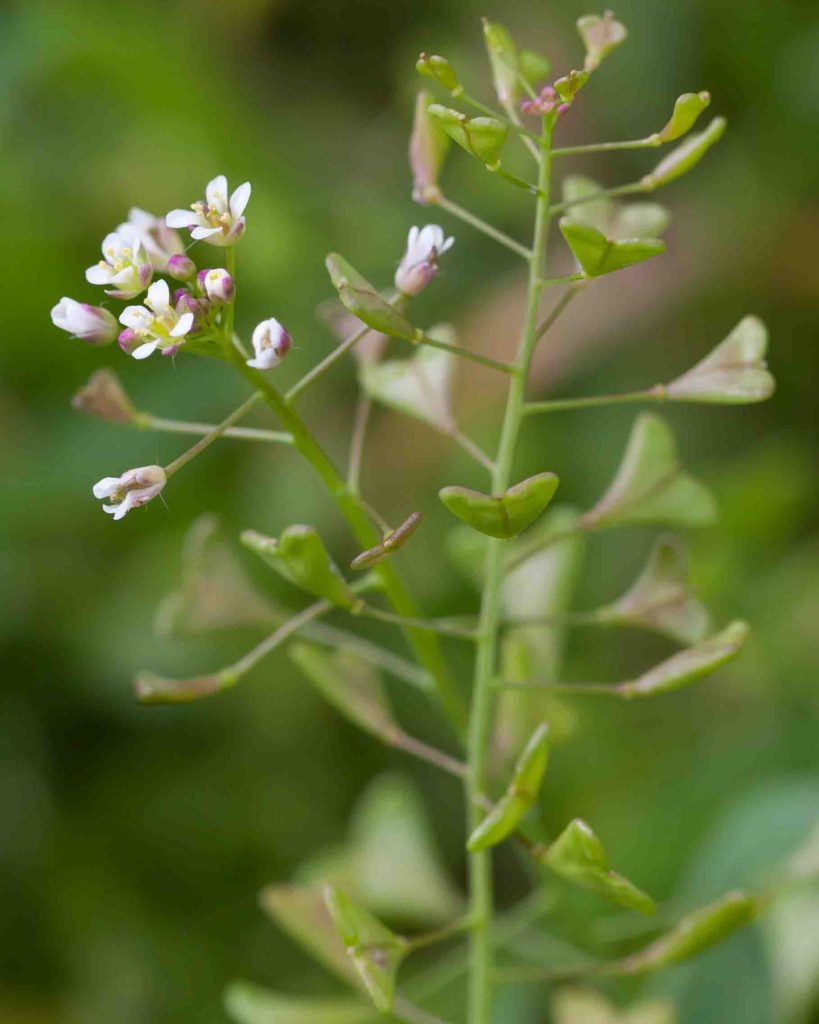 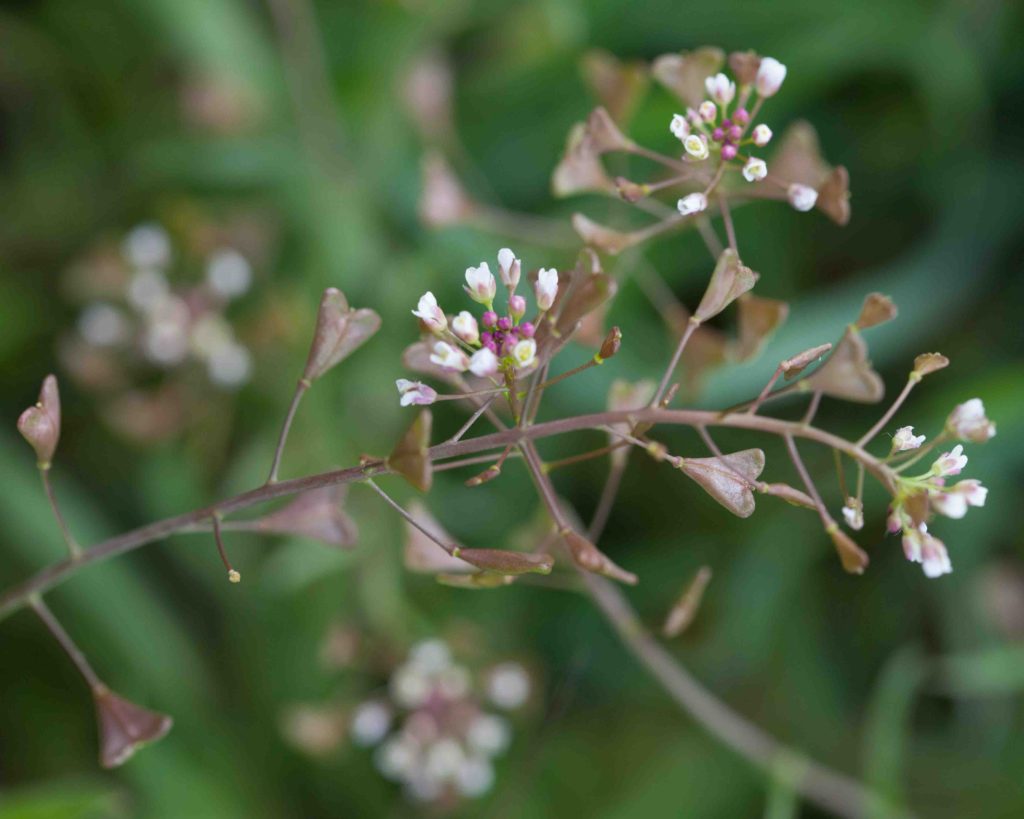 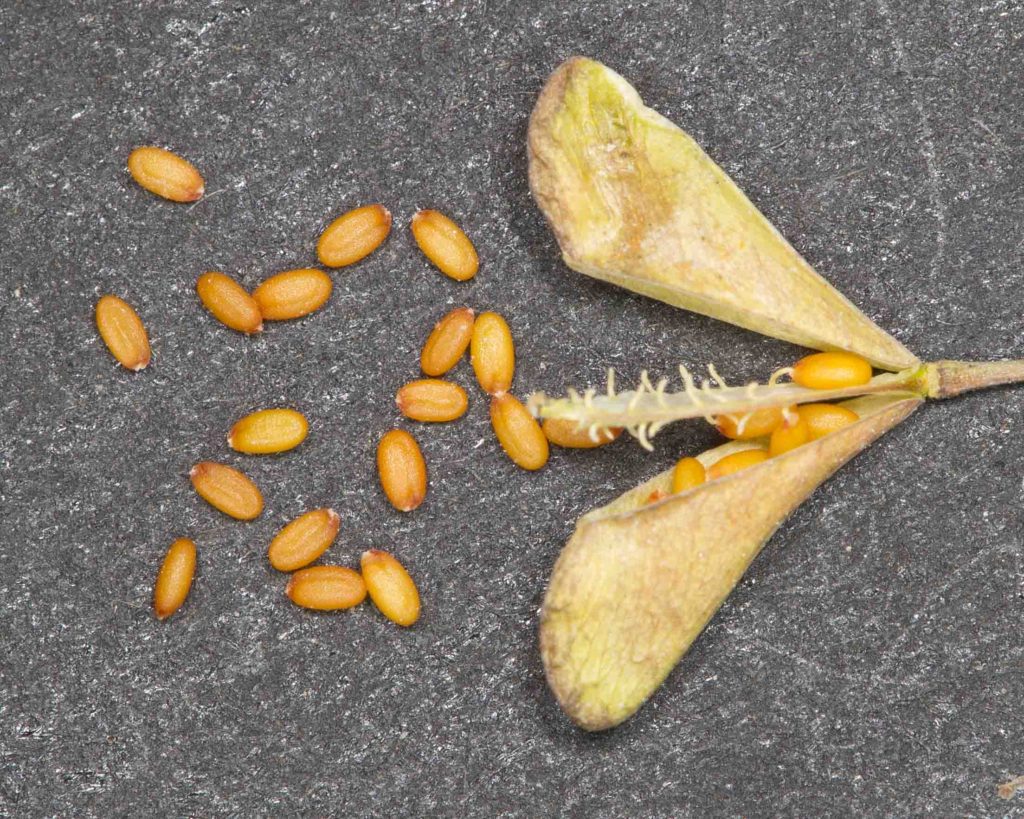 At first sight similar to the peppergrasses, but can be distinguished first by its rosette of small hairy basal leaves, and second by its fruit.   These are silicles, variable in shape from elliptic or ovate to oblong or even linear, and lacking the notched tip characteristic of peppergrasses.  The four white petals are deeply cleft. 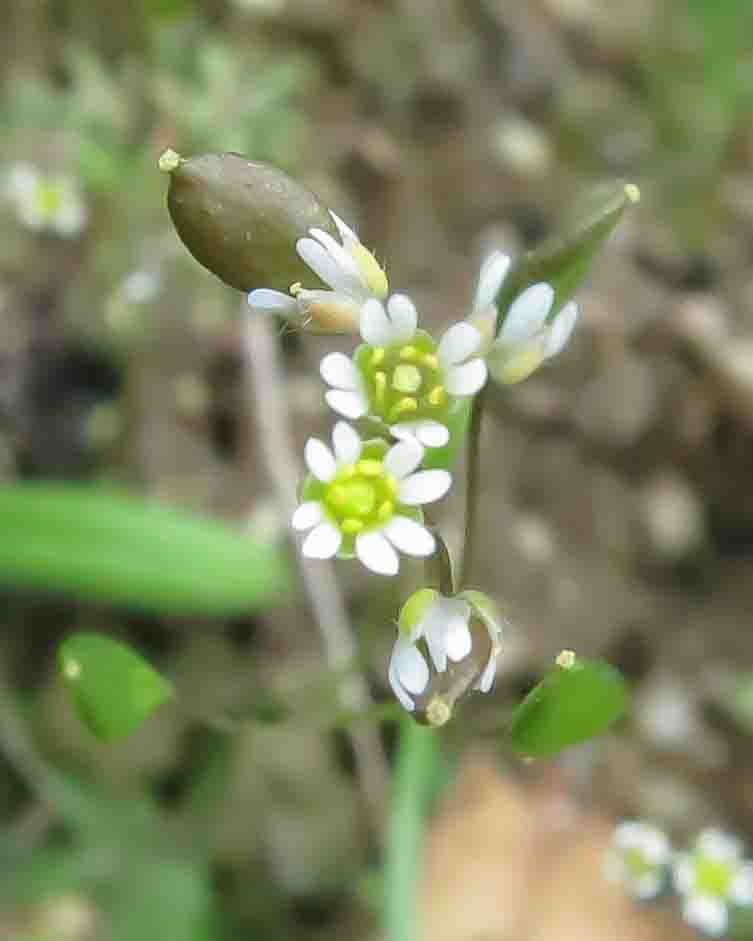 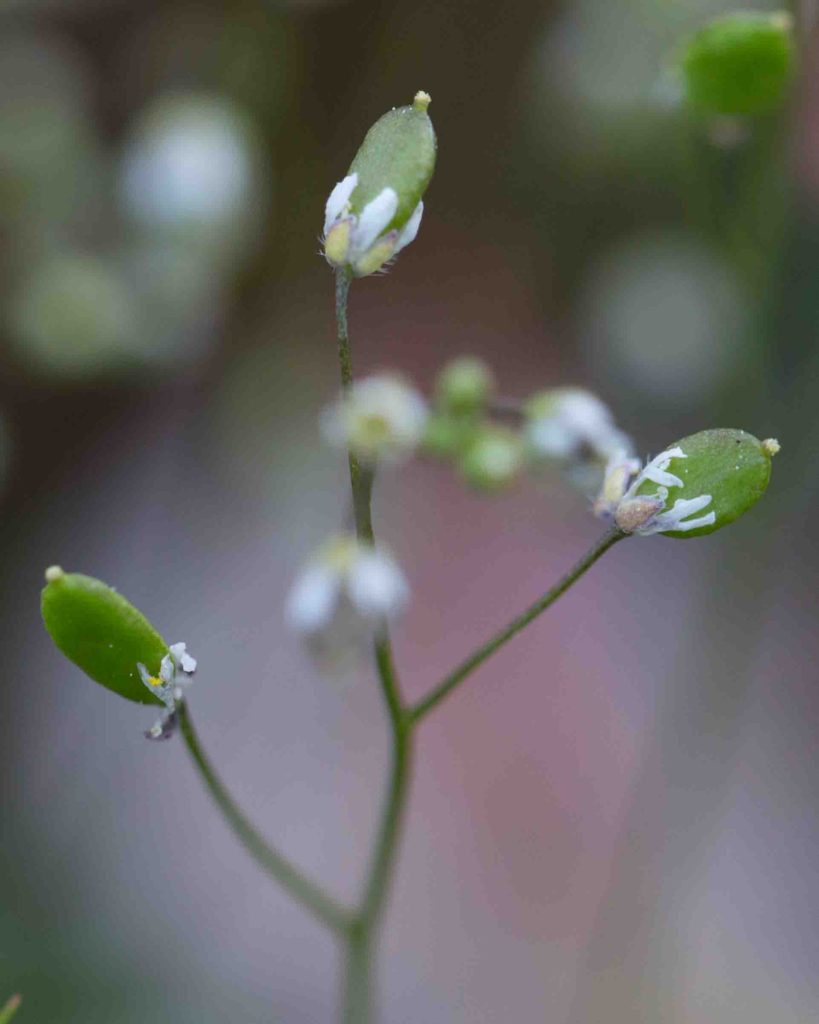 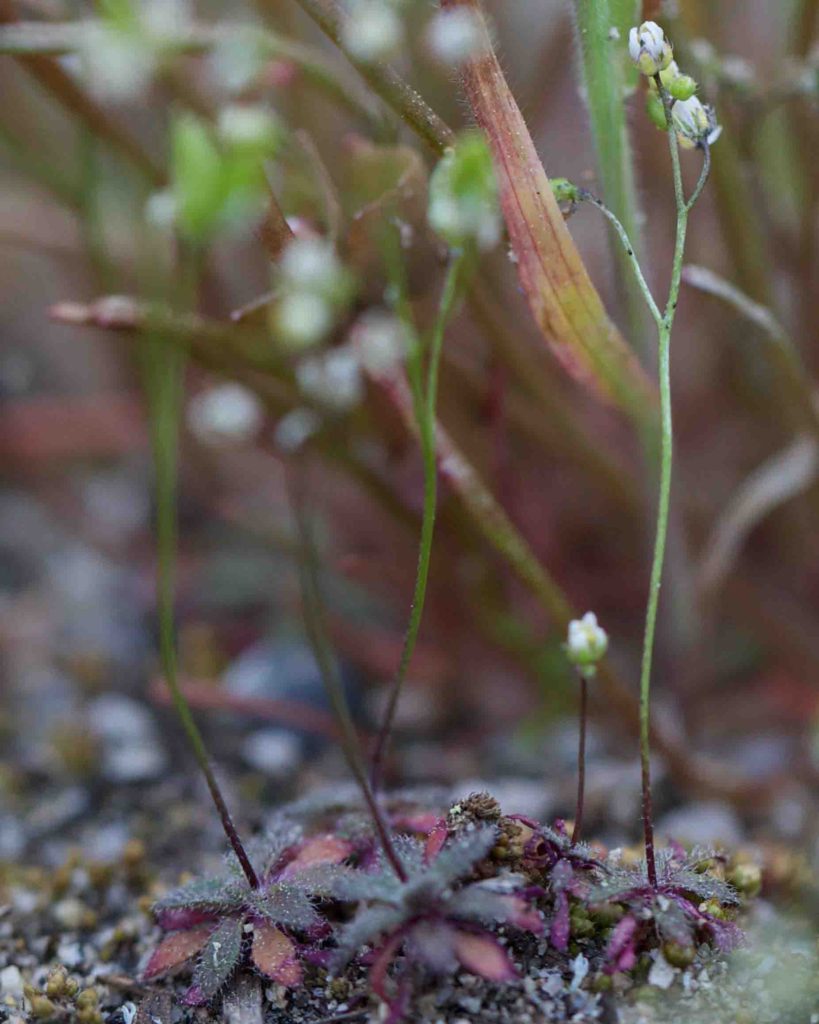 The most distinctive feature of this peppergrass is the elongated inflorescence with its small, spoon-shaped flowers forking off the stem.  Fruits are flat, oblong to ovate, and notched at the tip.  There is a basal rosette of leaves, as well as oblong to lanceolate cauline leaves.  The entire plant is covered in short hairs. 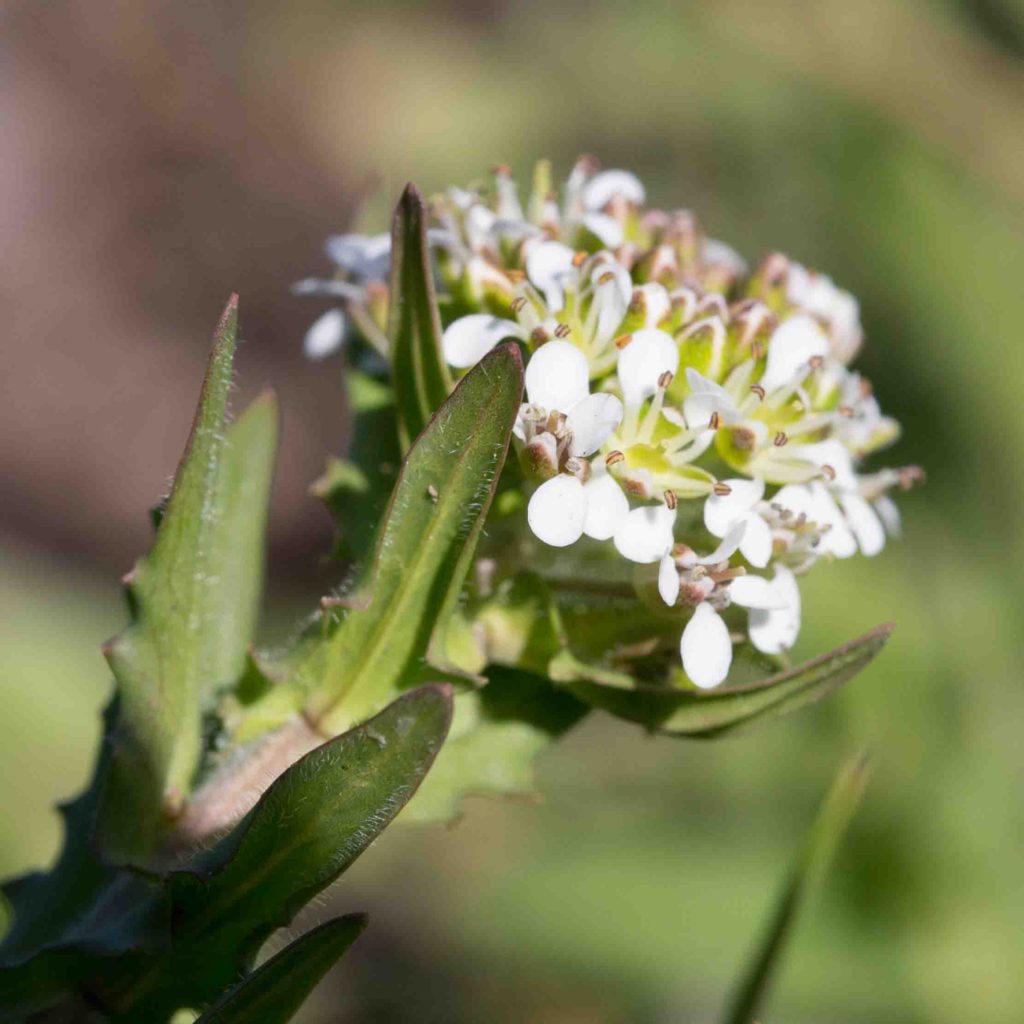 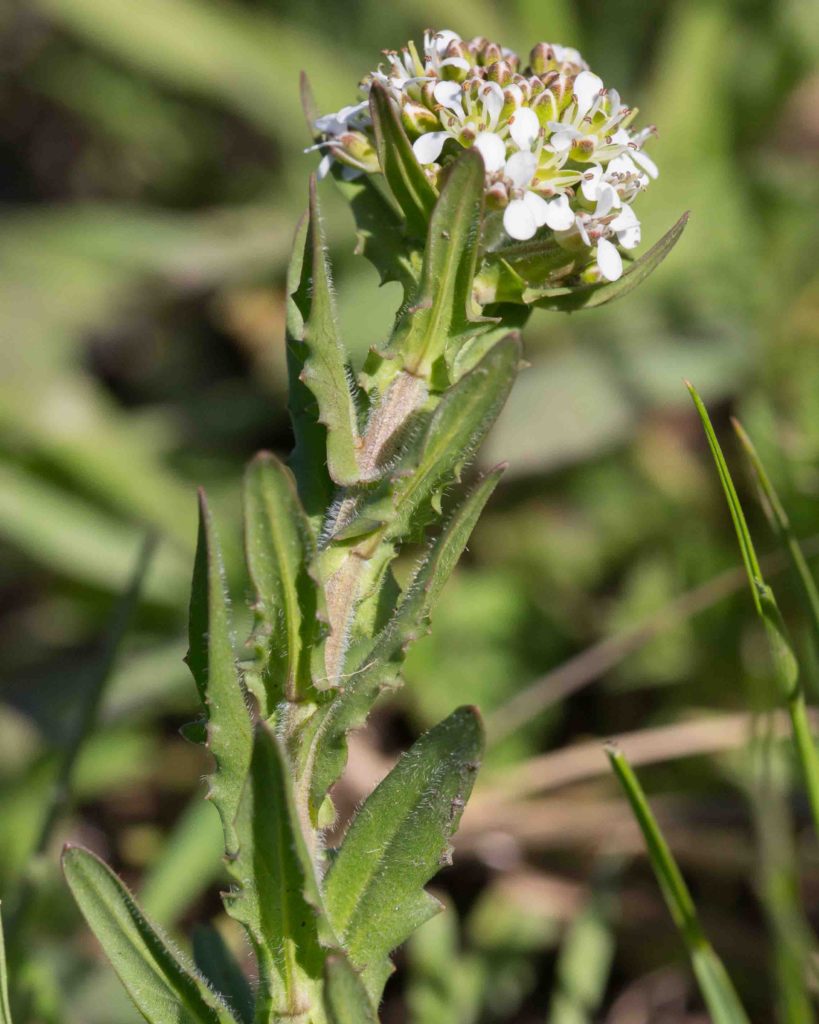 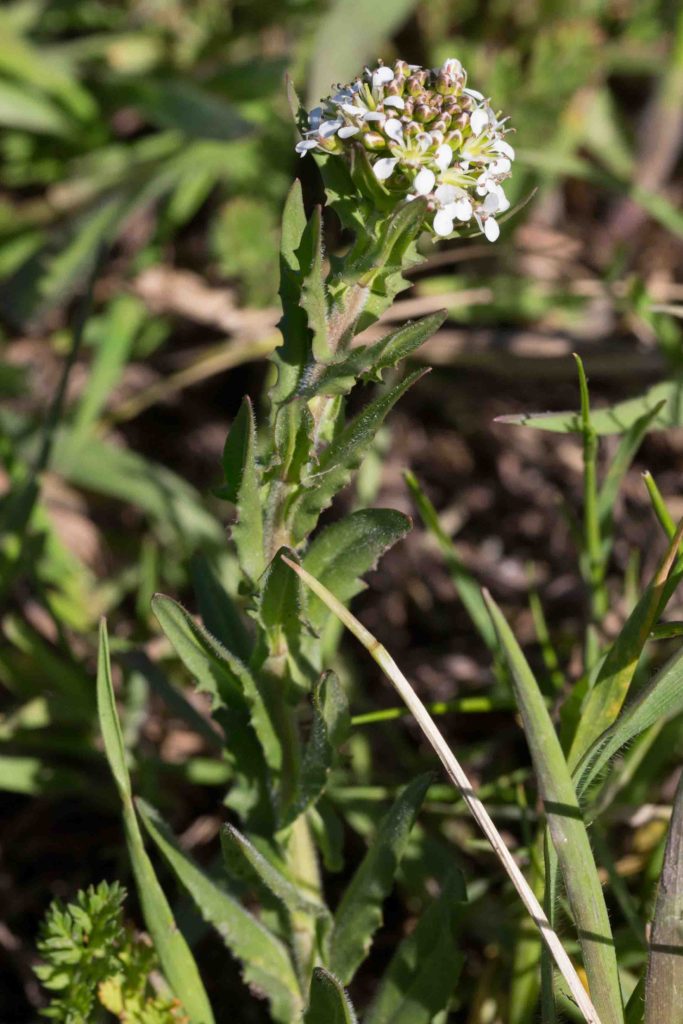 A common weed in disturbed places, more closely related to the peppergrasses than to the cresses, despite its common name. The leaves are finely dissected, the lobes entire or themselves lobed.  The fruits are the most distinctive feature, in pairs resembling a rather small pair of spectacles. 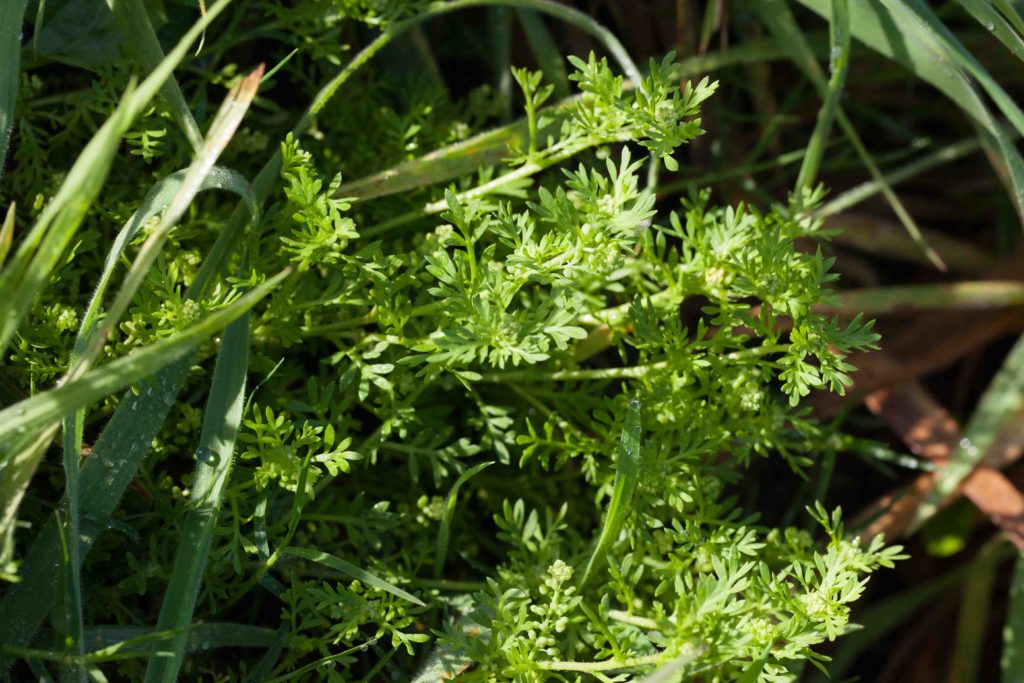 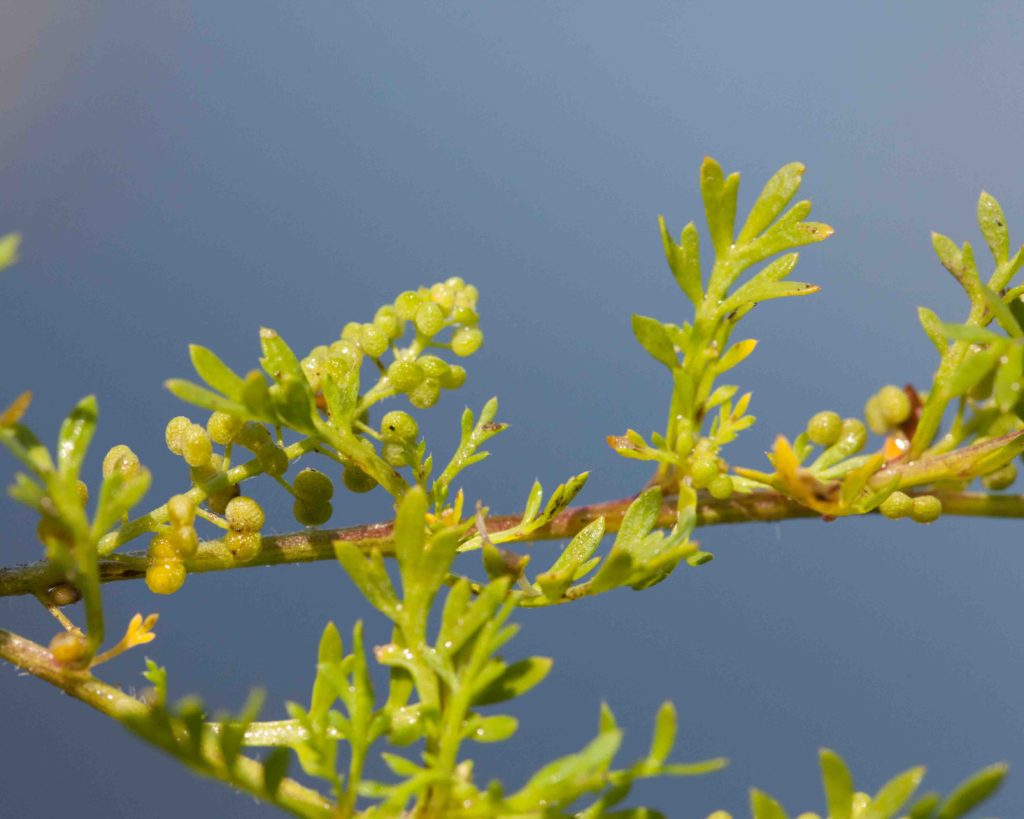 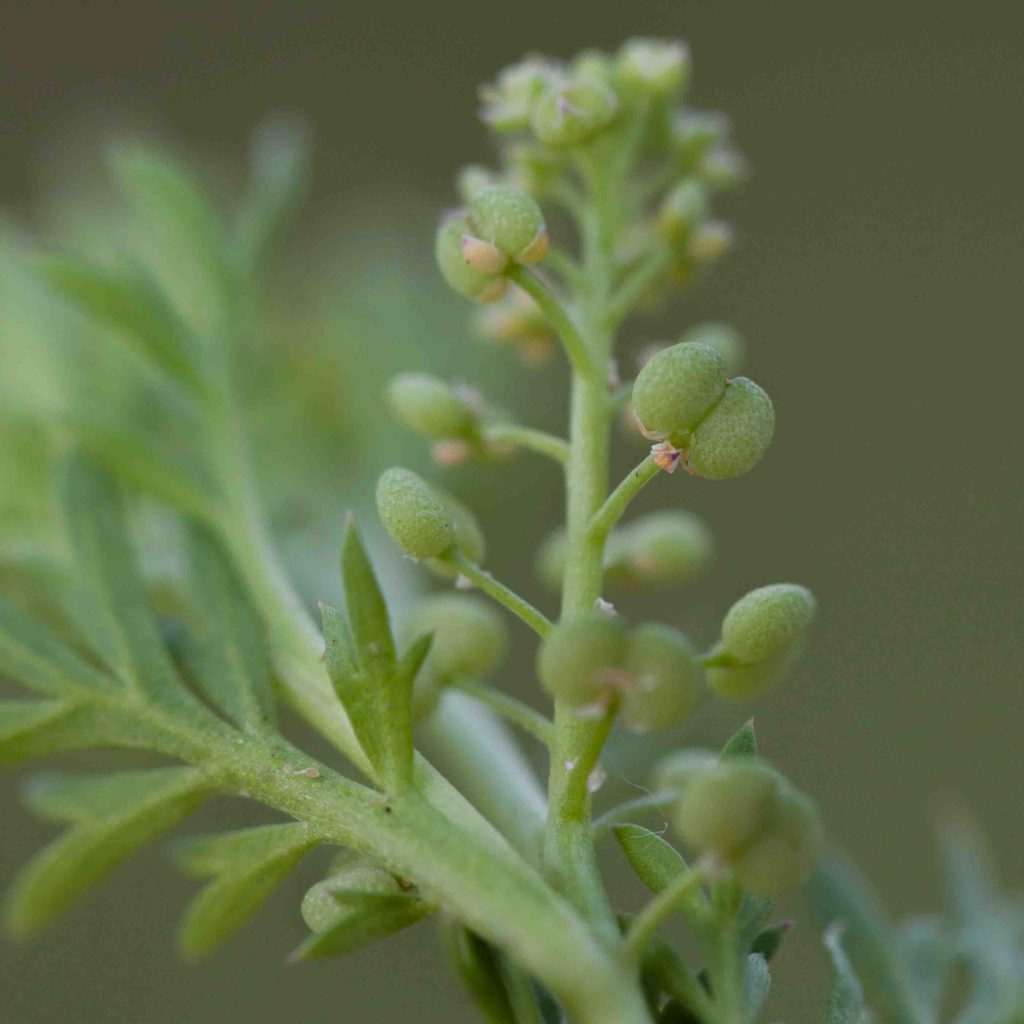 The tiny white flowers are less distinctive than the fruits.  They are flattened, shiny ovals with a shallow notch at the tip, and a conspicuous vertical seam down the middle.  Fruits are green, maturing red.  The pedicel itself is strongly flattened.  Photo #4 by CJH. 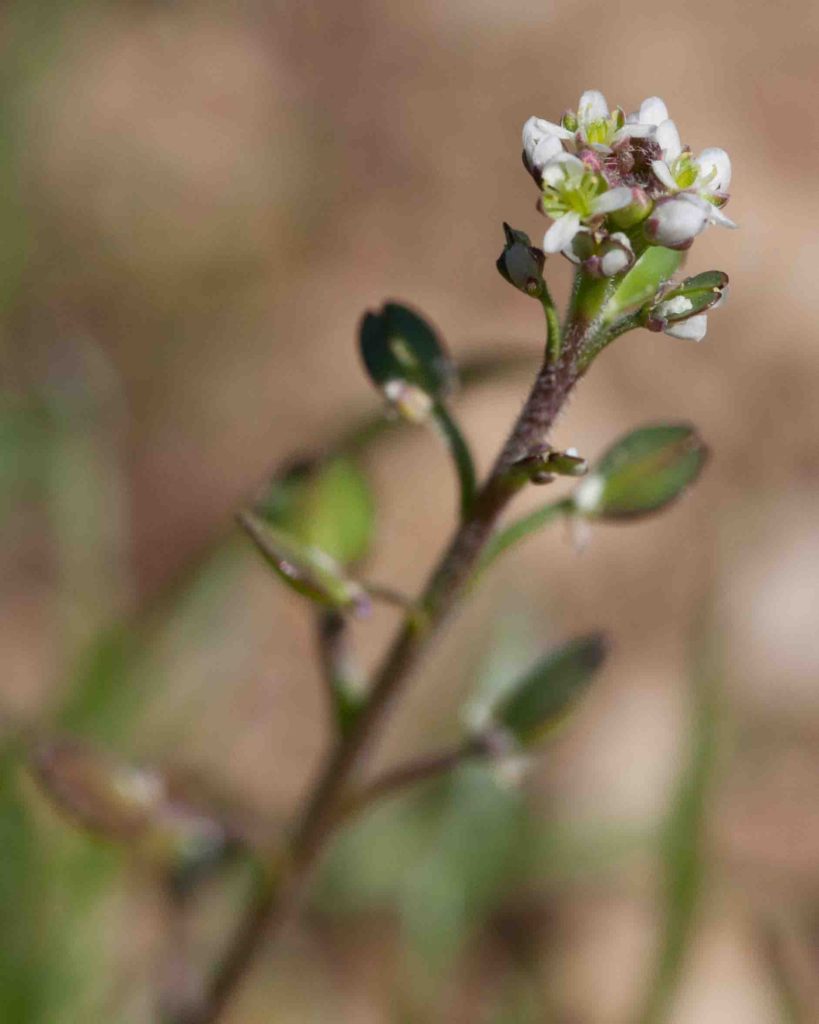 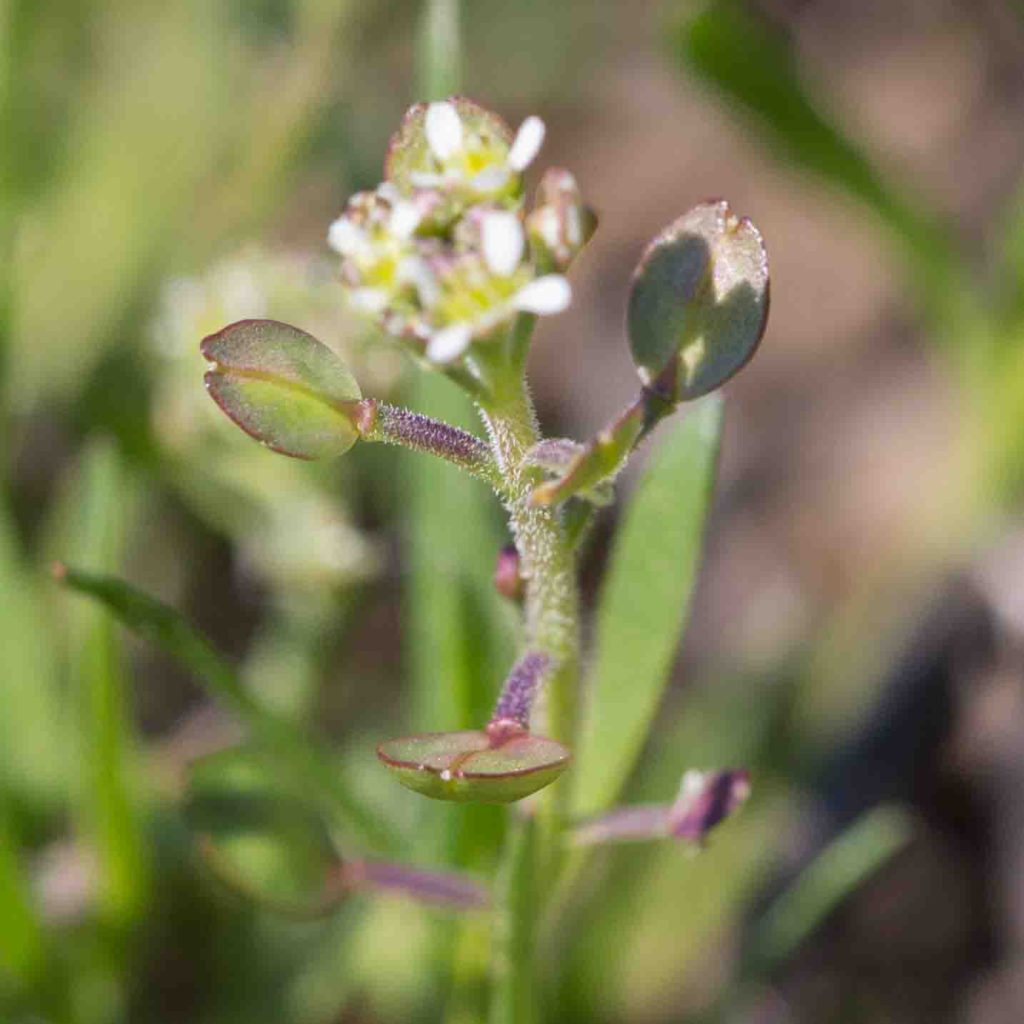 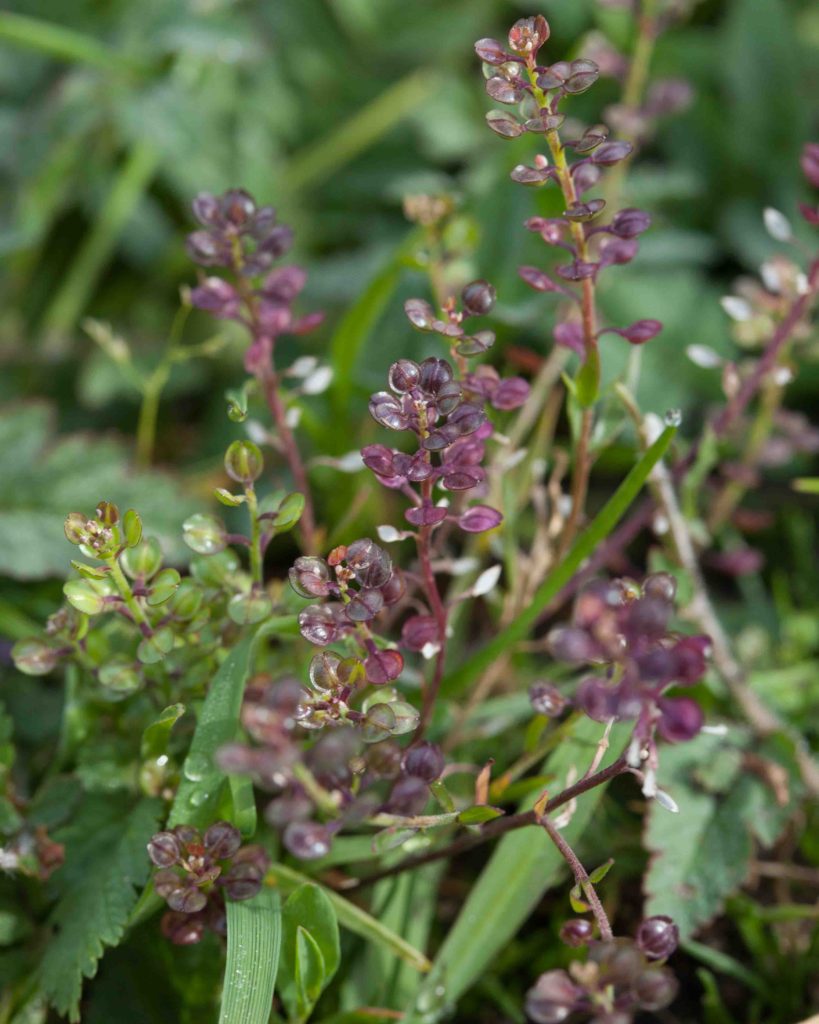 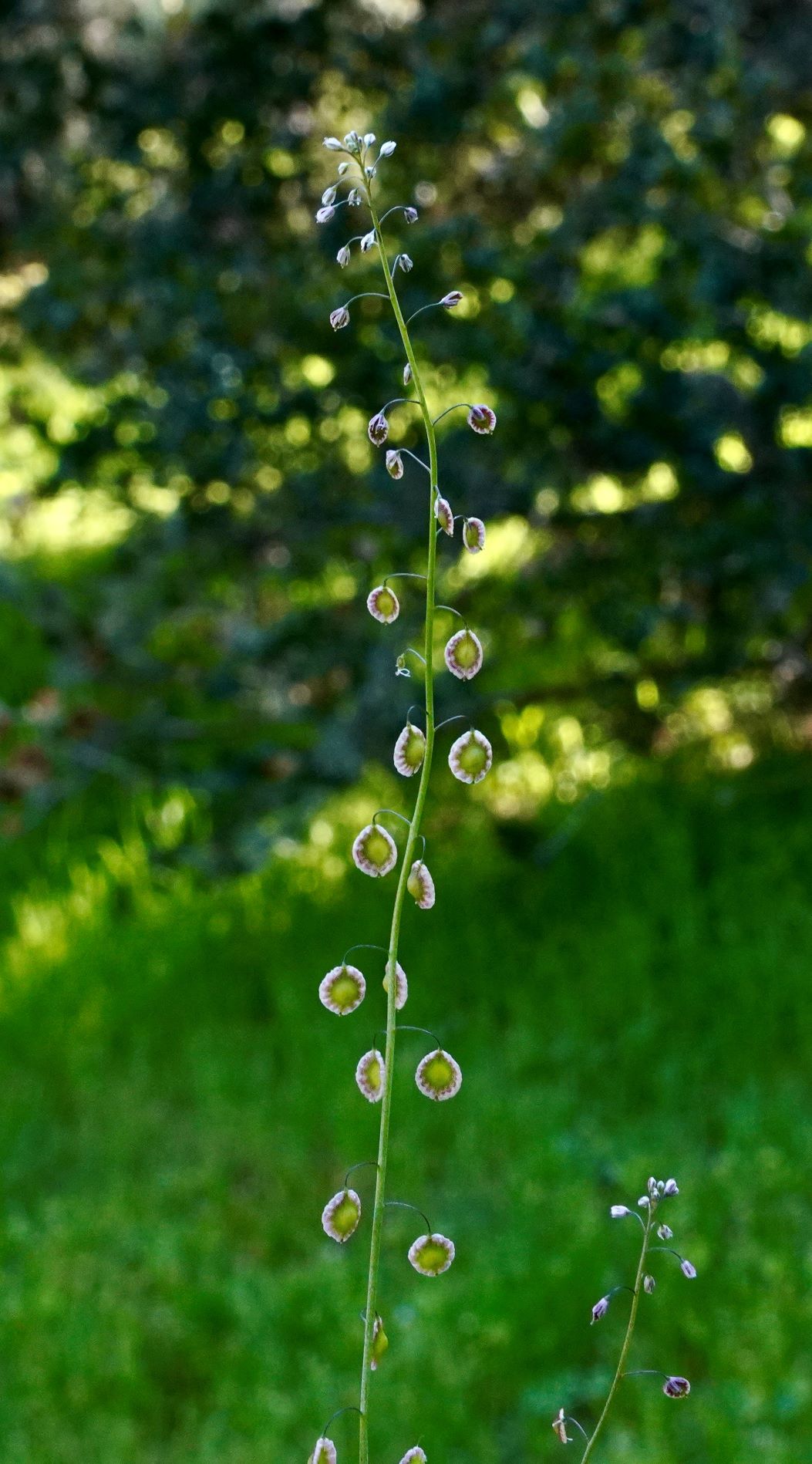 A small, very leafy peppergrass.  Its fruits are similar to Shining Peppergrass (Lepidium nitidum, see above), but smaller and with a more pronounced notch at the tip.  Leaves are pinnate, with slender leaflets. 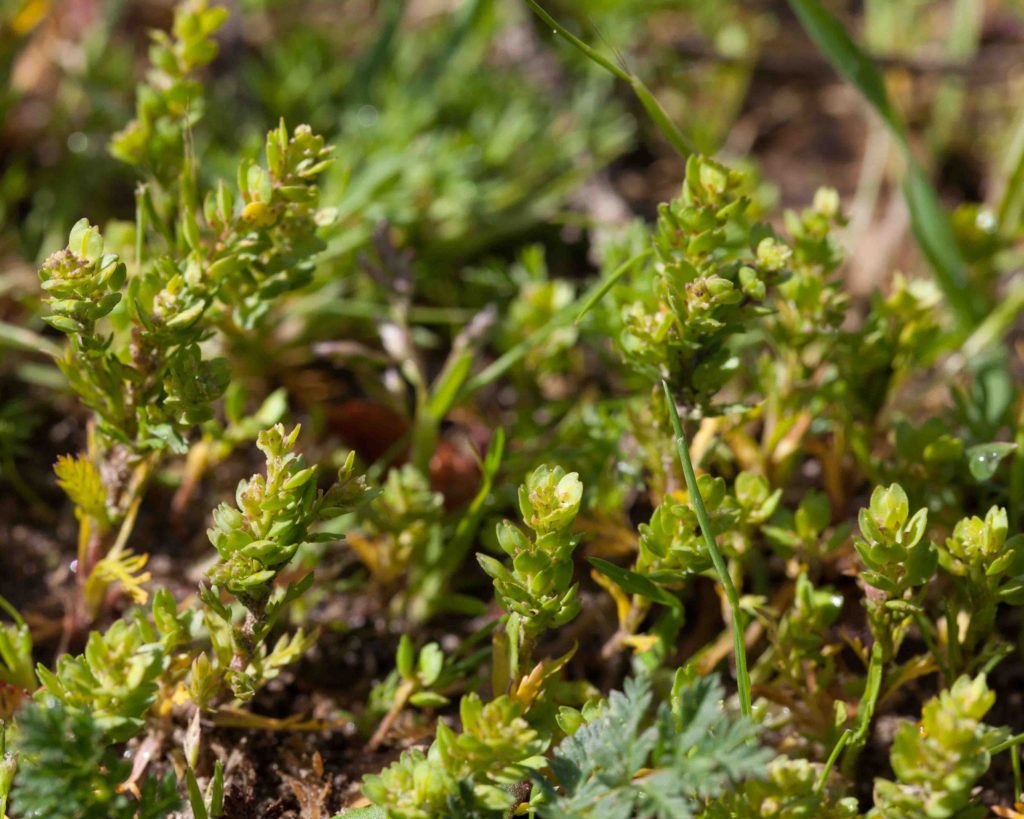 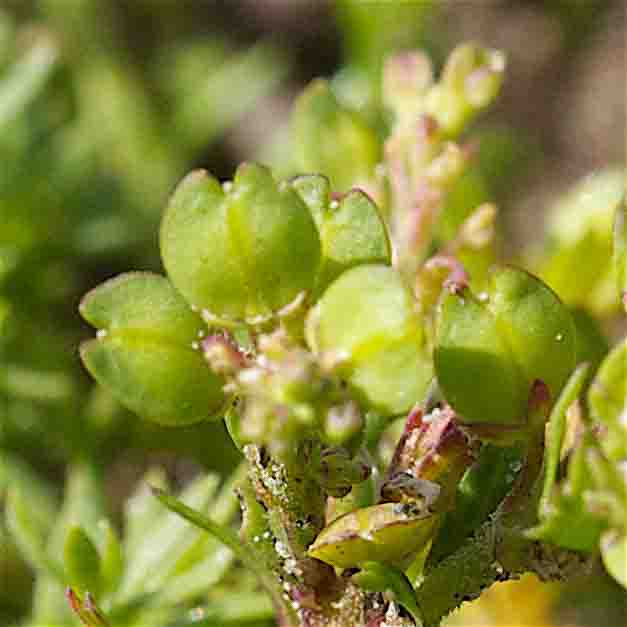 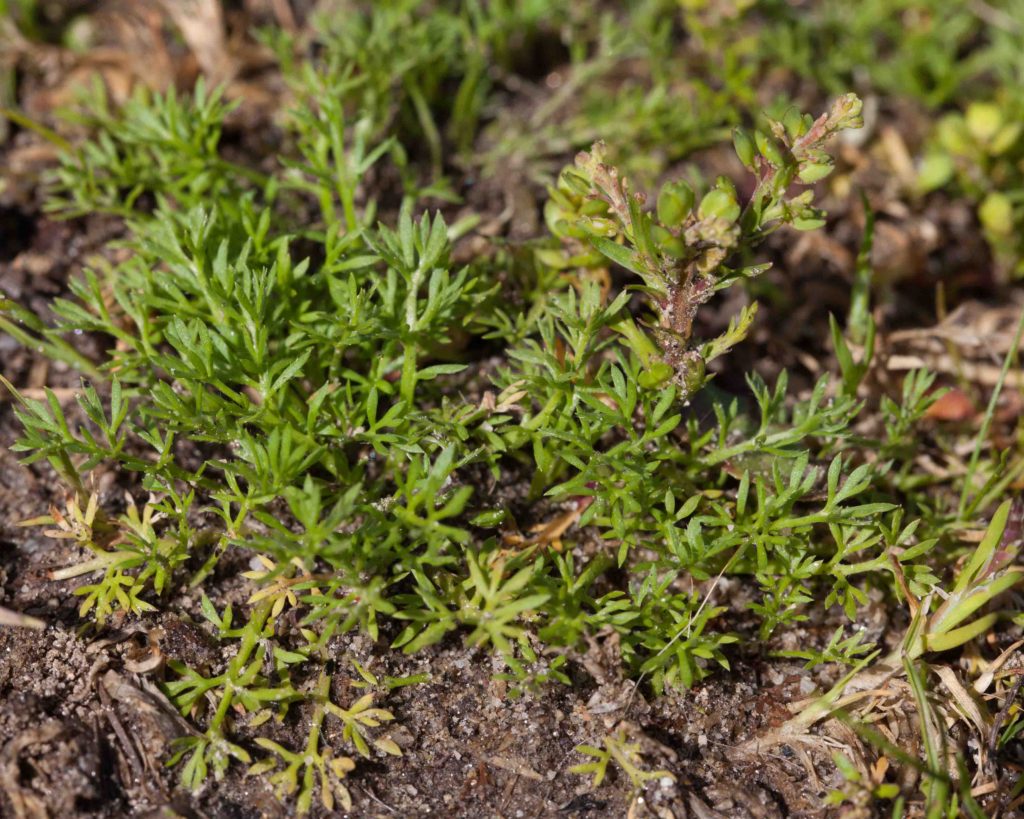 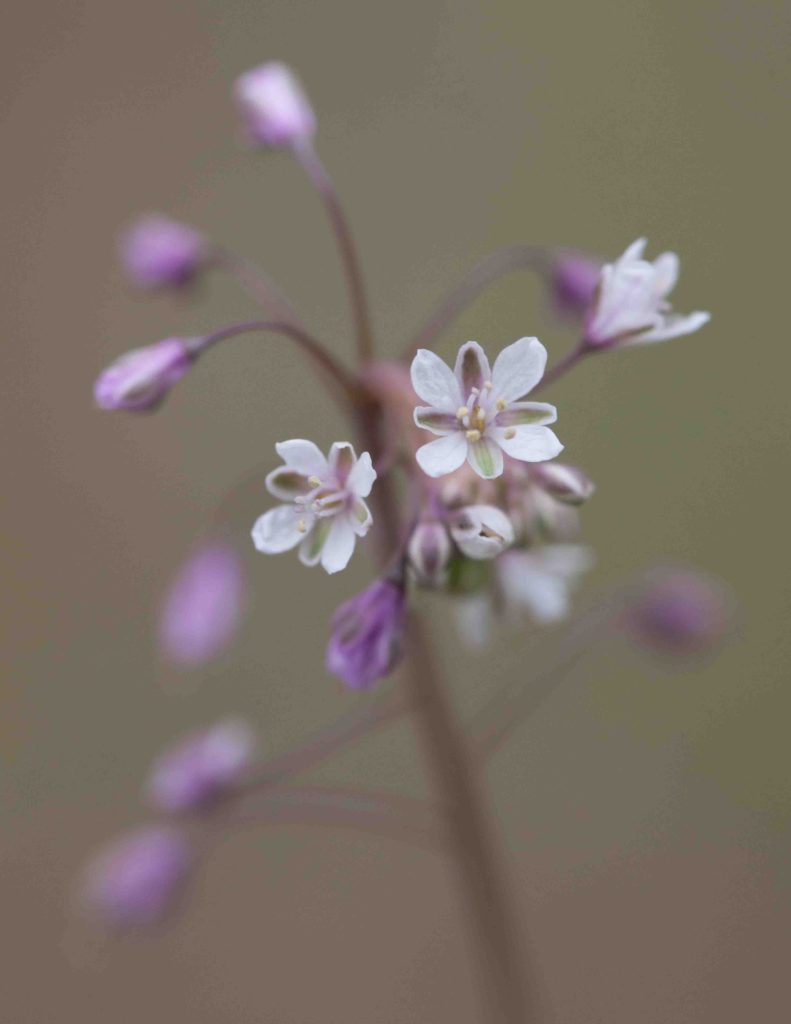 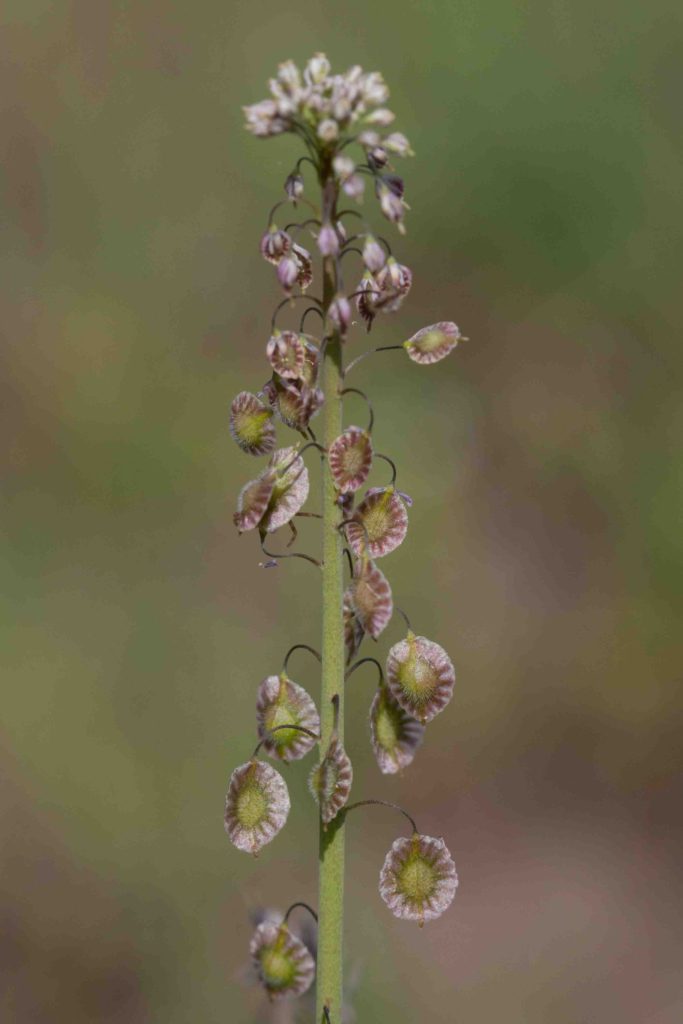 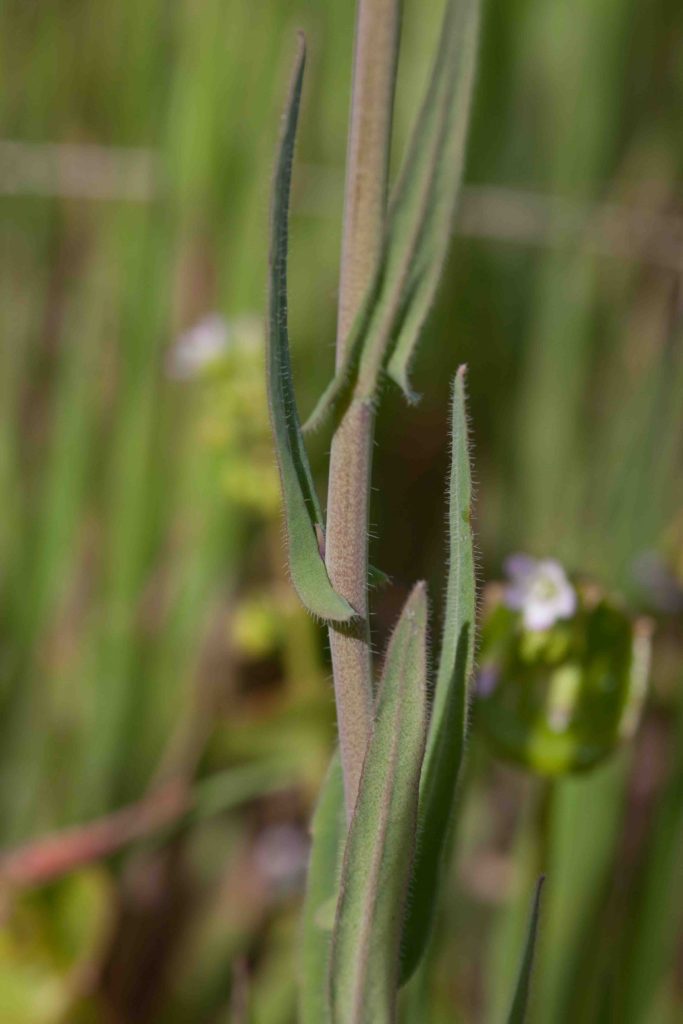 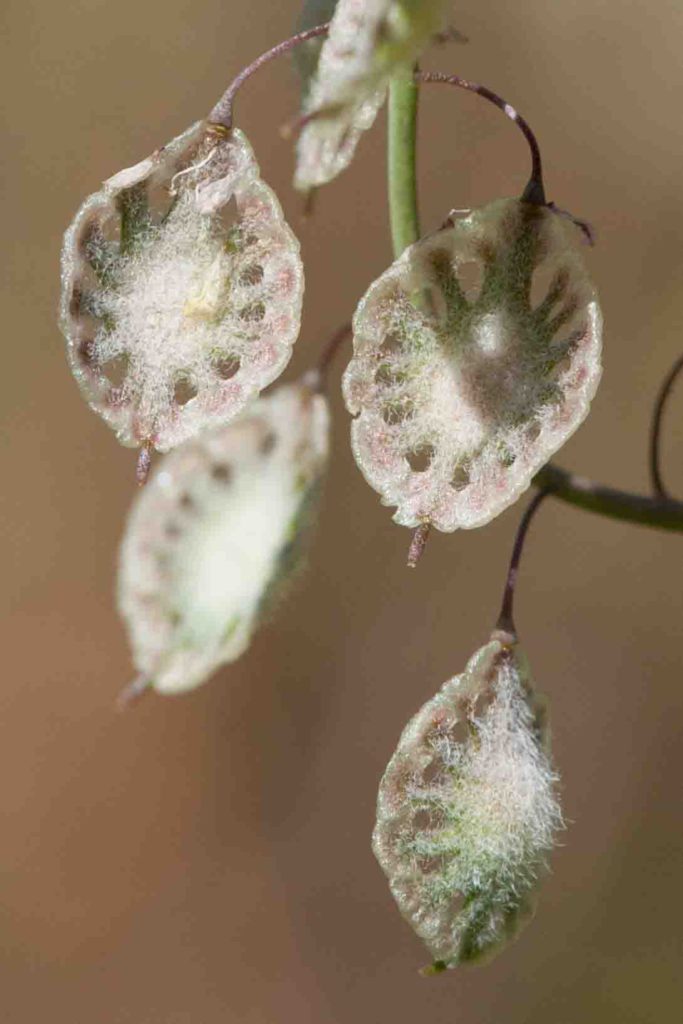 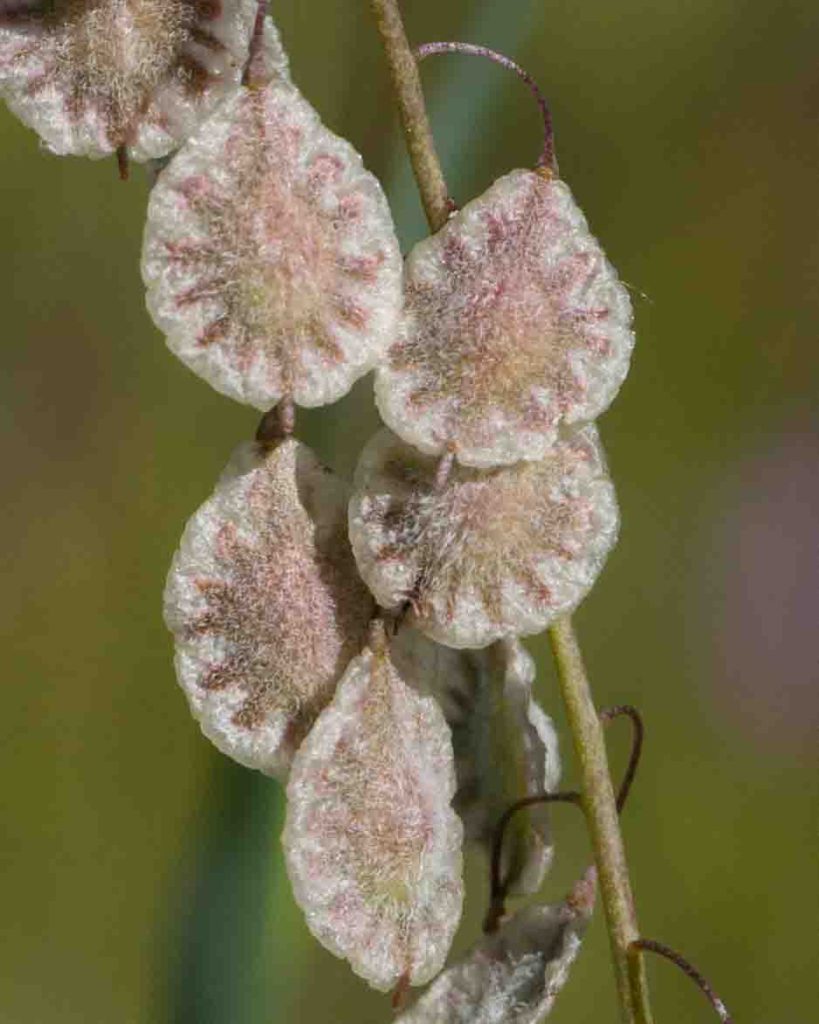 In general, Fringepods are most easily recognized by their fruits.  They are oval with crenate (scalloped) margins, and may be perforated.  This species has fruits that are smaller (3–5 mm), not hairy and are rarely perforated.  Its leaves do not have clasping bases, and may be pinnately lobed.  The glabrous fruits and non-clasping leaves make it easy to distinguish this species from Hairy Fringepod (Thysanocarpus curvipes, see above).  The photo on the right shows the fruits of both Narrow-leaved (top and right) and Hairy Fringepods (lower left).  Photo #1 by CJH. 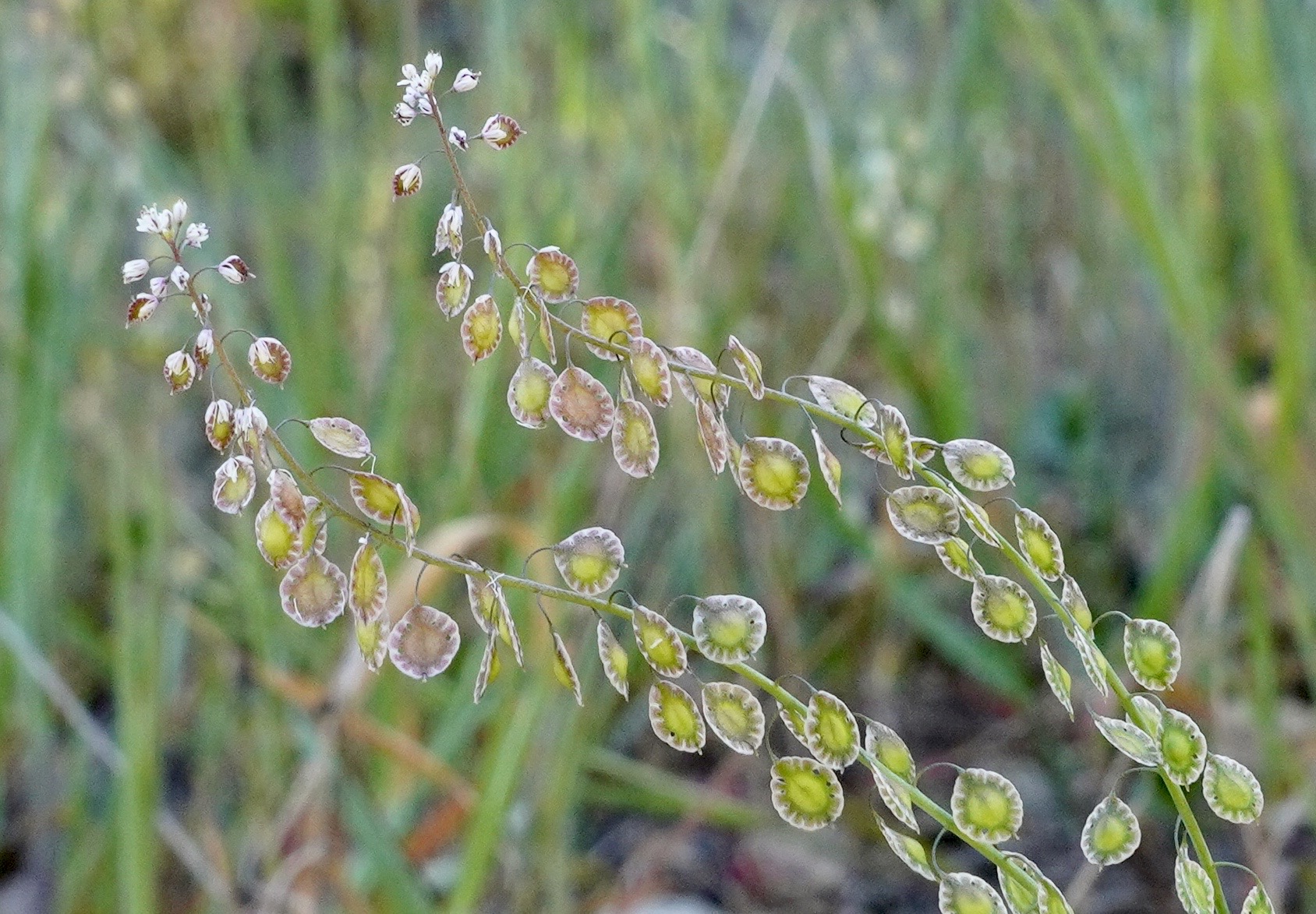 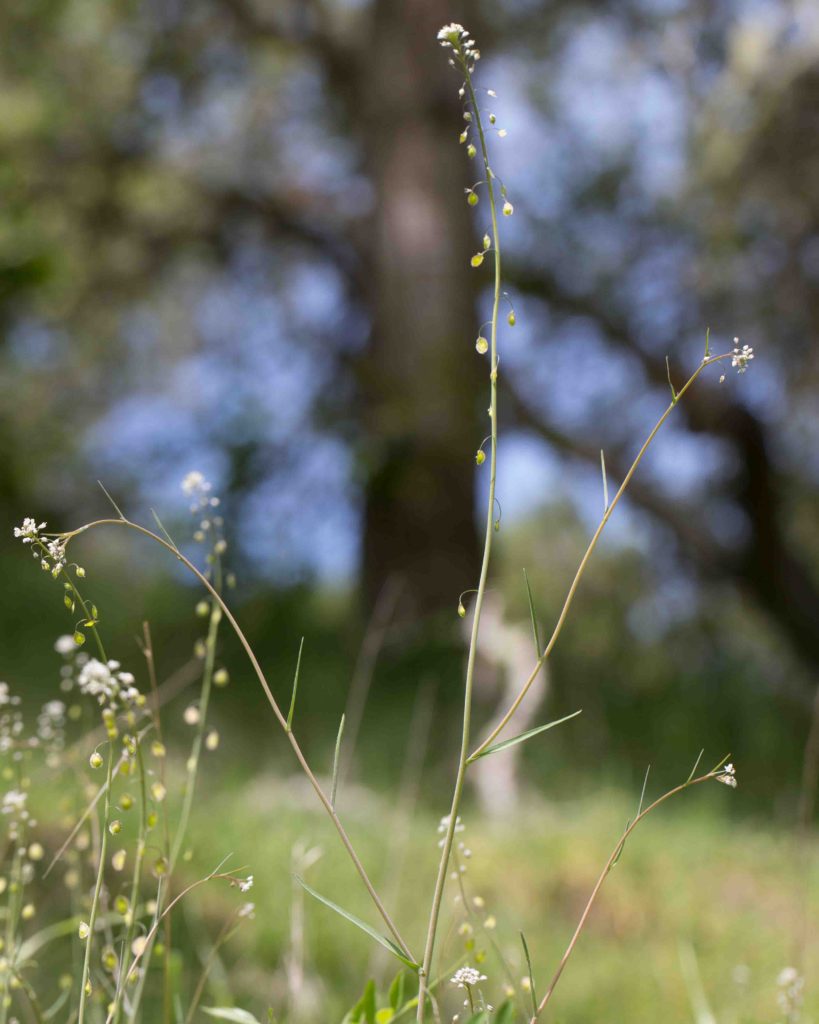 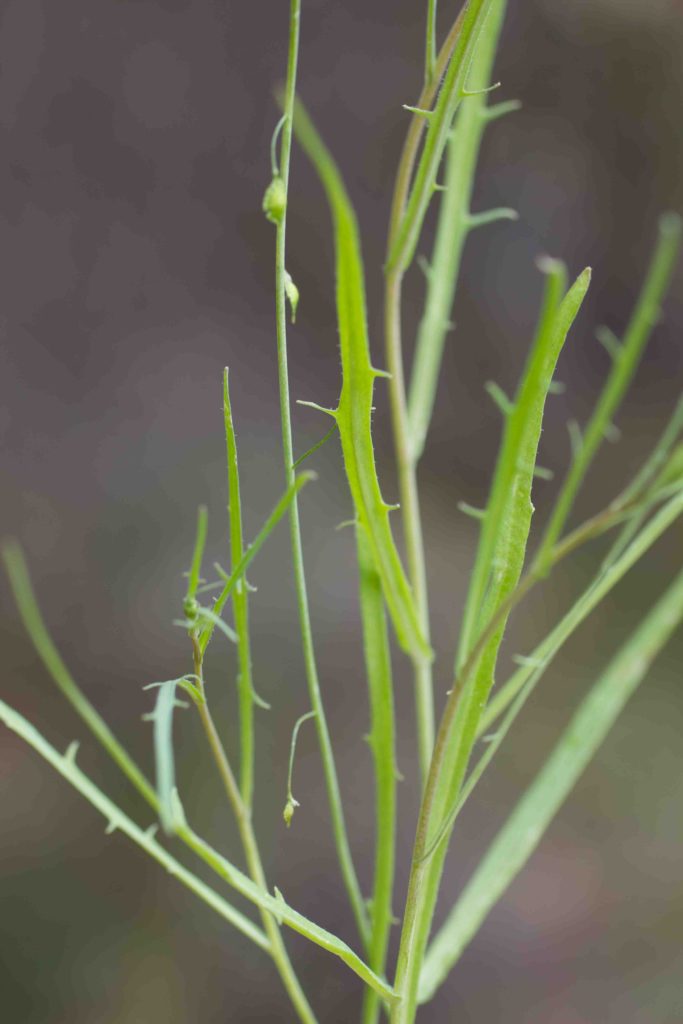 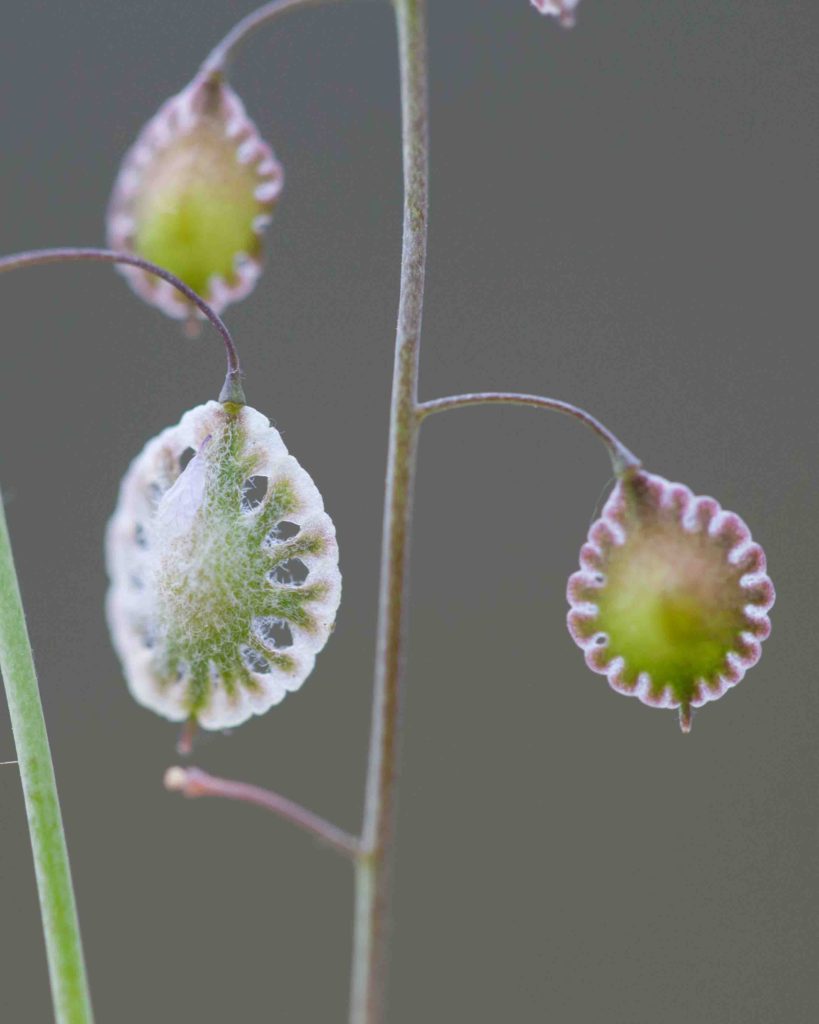