All ferns included here are native to California.

This is a delicate, moisture-loving fern, found on shaded slopes and streamsides.  It is particularly beautiful, with the same black stems as the related California Maidenhair & Goldback Ferns (Adiantum jordanii & Pentagramma triangularis, see below for both).  The drooping fronds are arranged palmately, then pinnately divided into delicate pinnules, fringed on the lower margin.  Despite the common name, there are often more than five “fingers”. 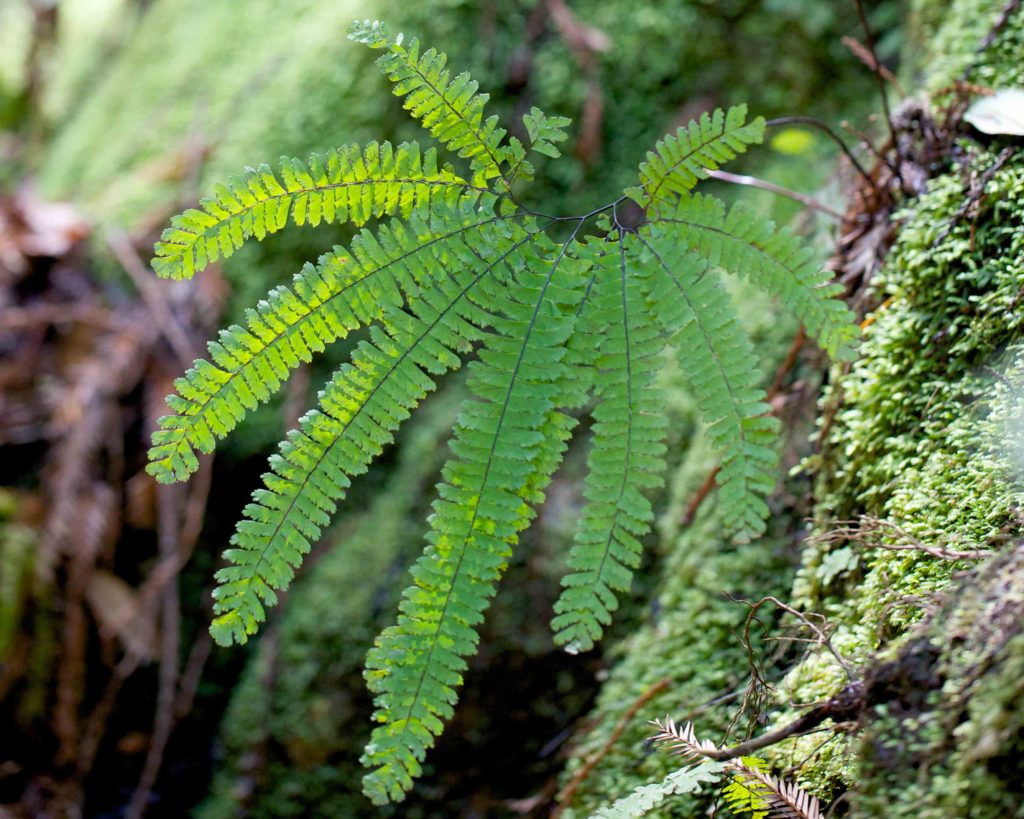 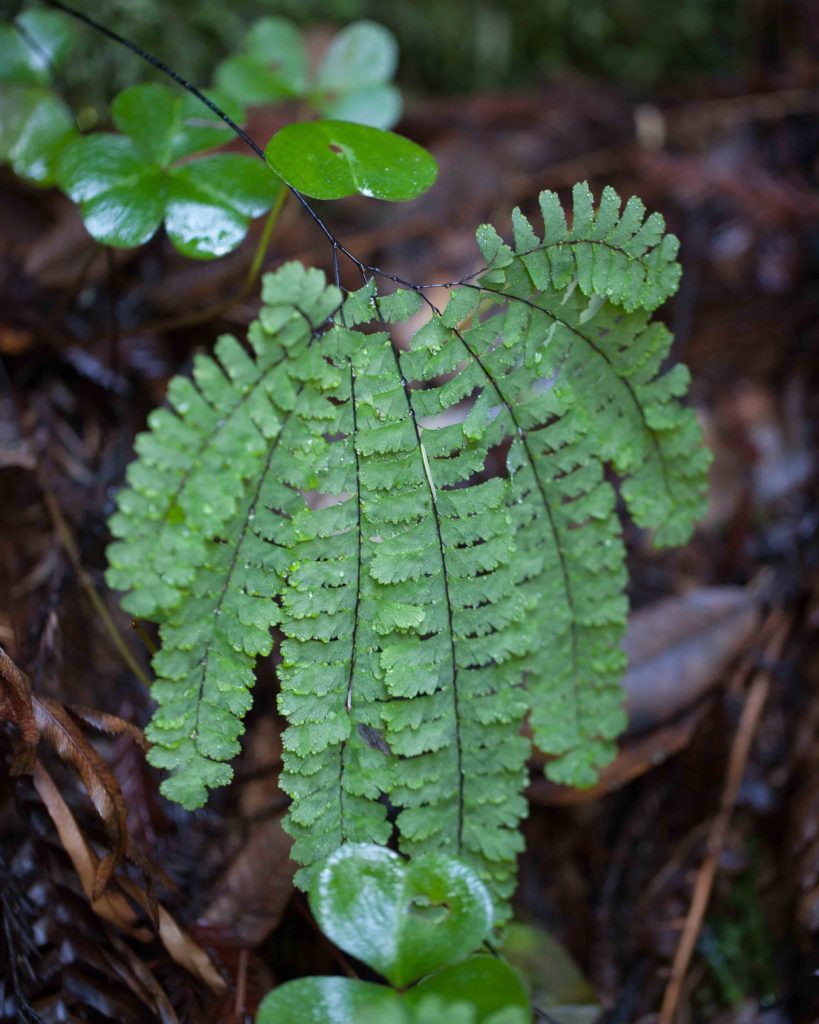 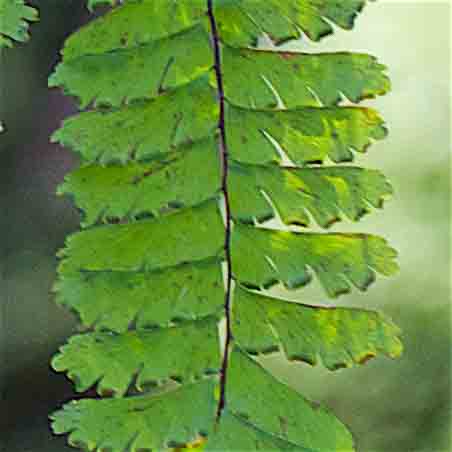 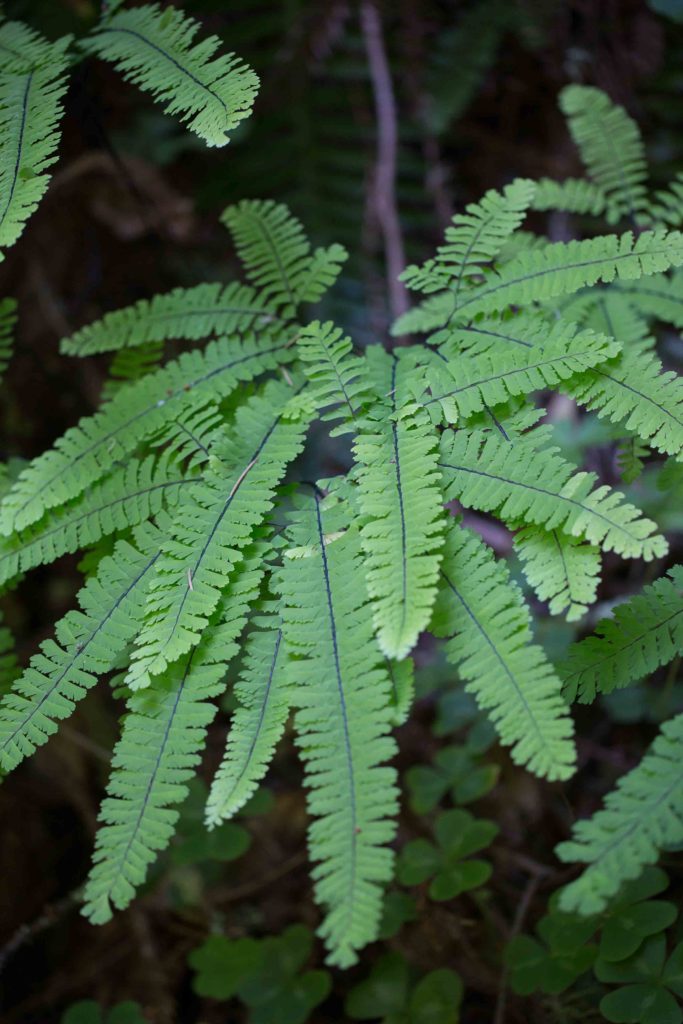 This is similar to the much more common California Maidenhair (Adiantum jordanii, see below).  However, it is not summer-deciduous, and it has larger, distinctly lobed, more deeply-cut pinnules.  The base of the pinnule makes an angle of 45–90°.  Uncommon, found on limestone seeps on rocky walls. 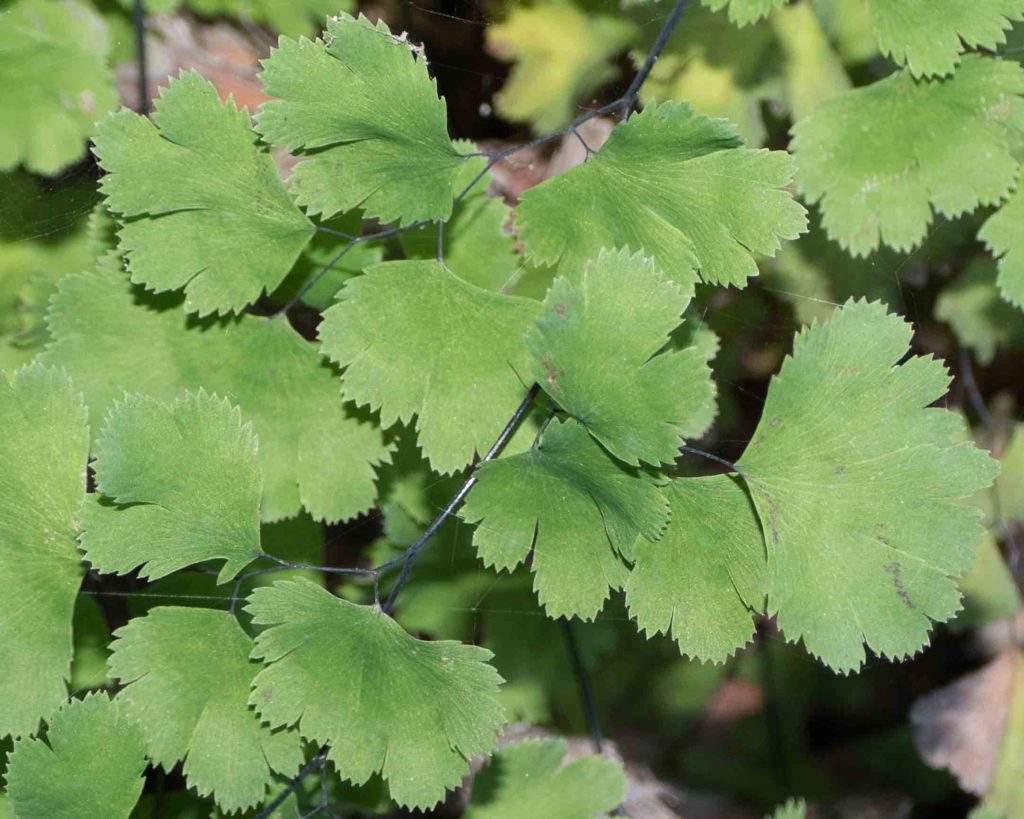 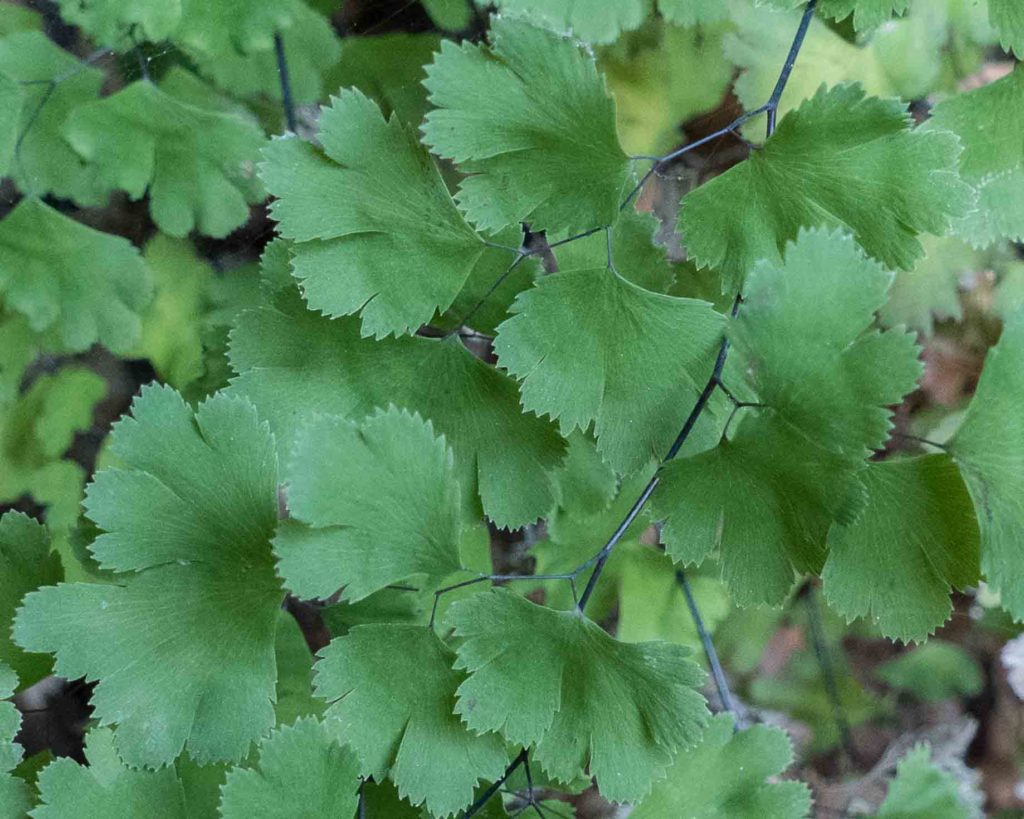 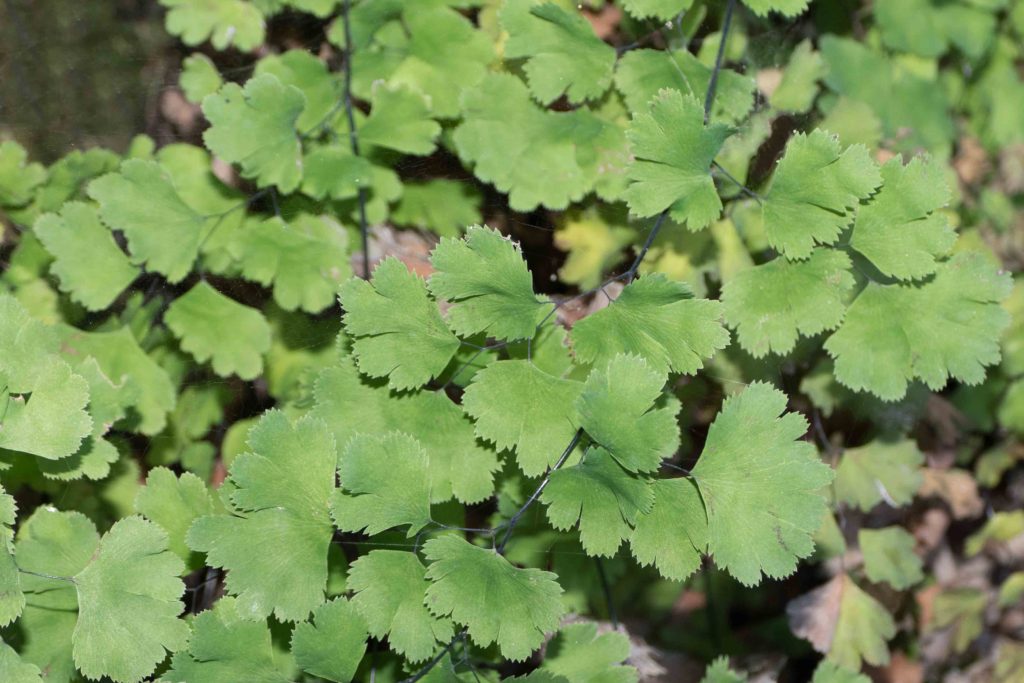 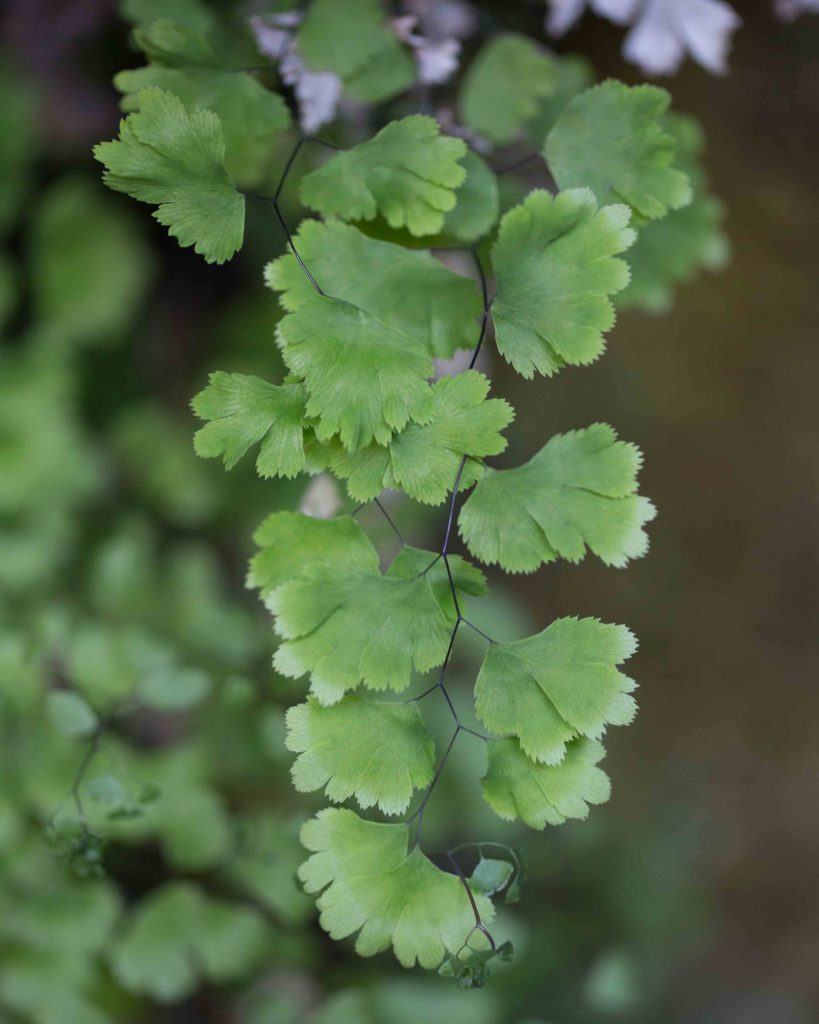 This is one of the most common — and most beautiful  — of the ferns.  It appears shortly after the first rains of winter, and dies back during the summer drought.  It has fine black stems and delicate, fan-shaped pinnules.  The pinnules are slightly lobed and/or cut, but less so than Venus-hair Fern (Adiantum capillus-veneris, see above).  The base of the pinnule makes an angle of 90–240°.  The sori are borne along the veins, and covered by part of the rolled-over margins of the pinnules. 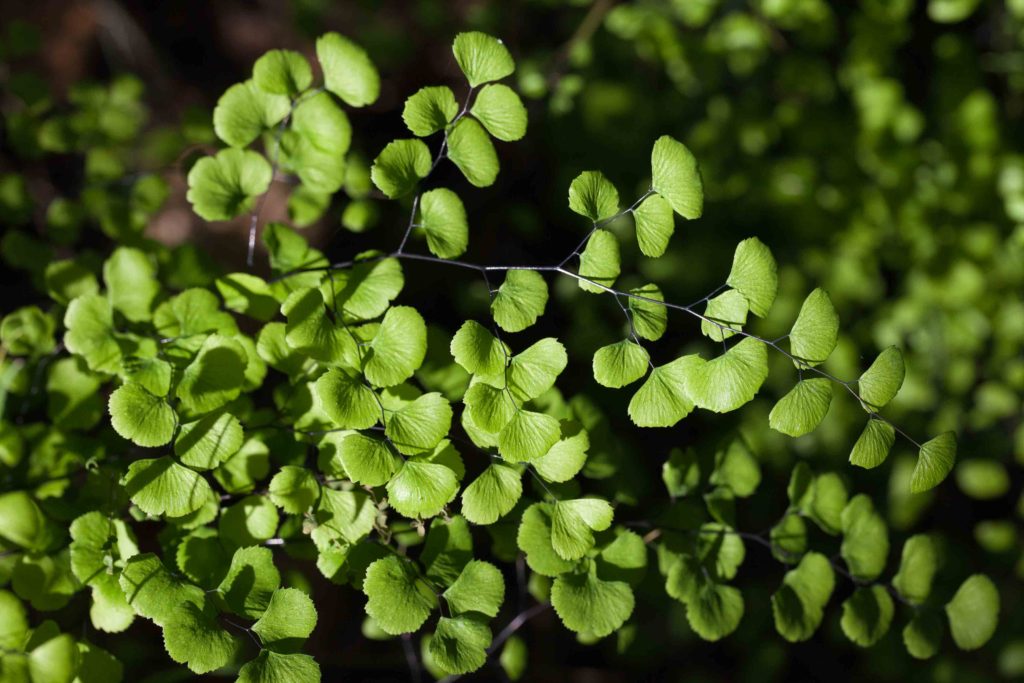 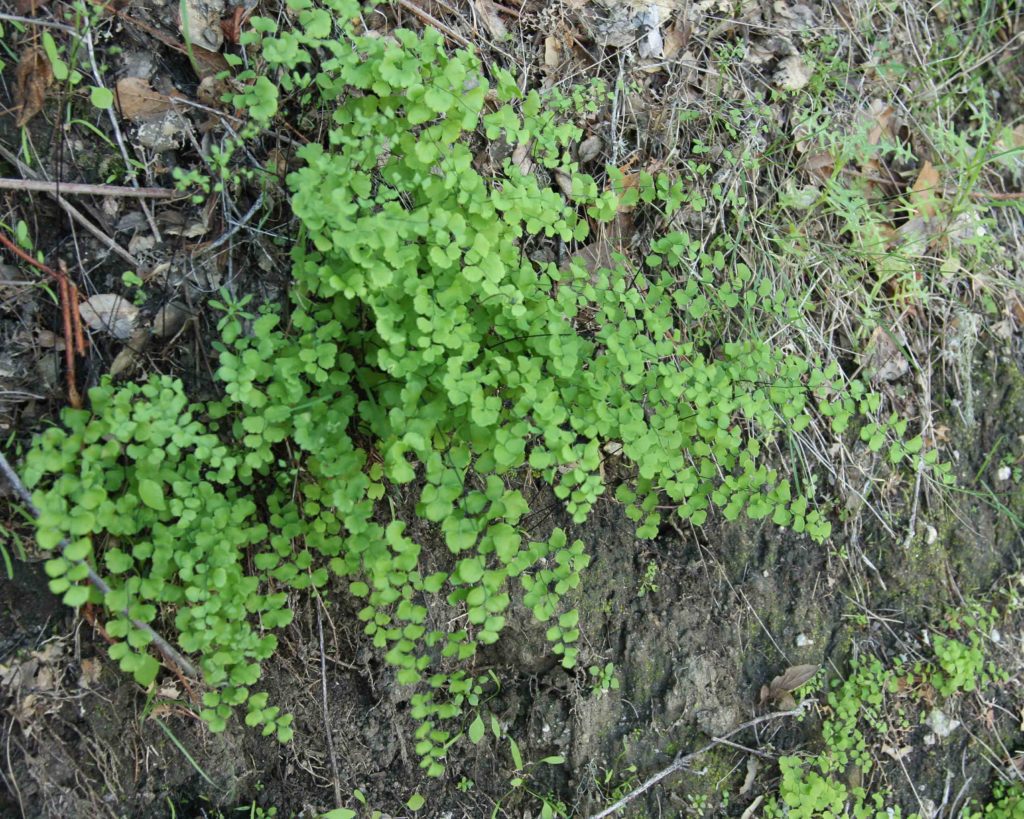 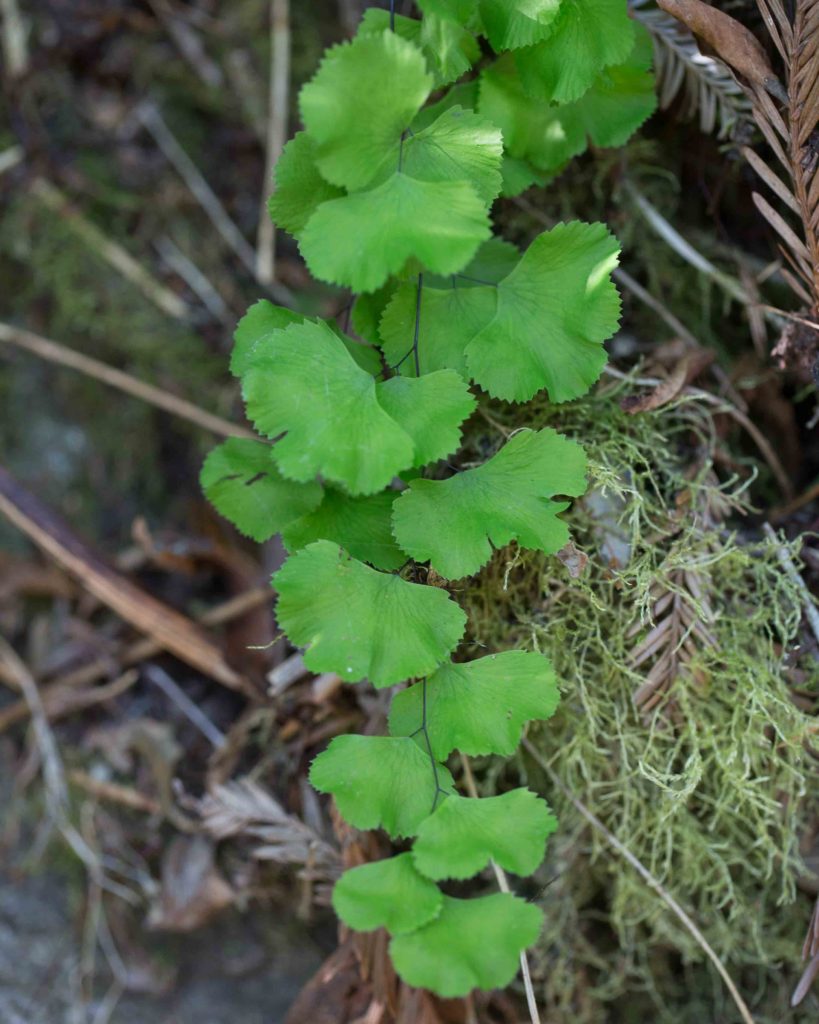 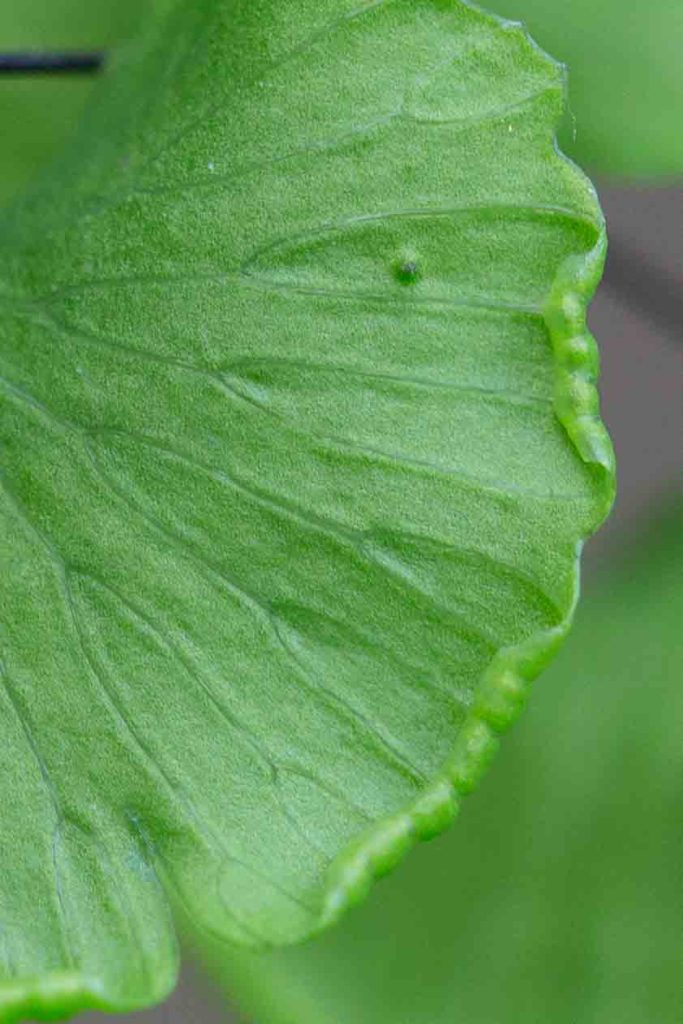 This fern has a low spreading growth habit, with elongate to triangular fronds.  The very small, round to oval pinnules are noticeably tougher than on most ferns, giving the plant a somewhat shrub-like appearance.  The pinnules are pale green when young, and blue-green when mature.  Sometimes the margins of the pinnules are rolled under, so that the fern resembles Bird’s-foot Fern (Pellaea mucronata, see below).  However, the pinnules lack the small, pointed tip found on Bird’s-foot Fern, so confusion is easily avoided.  Common in rocky or dry areas. 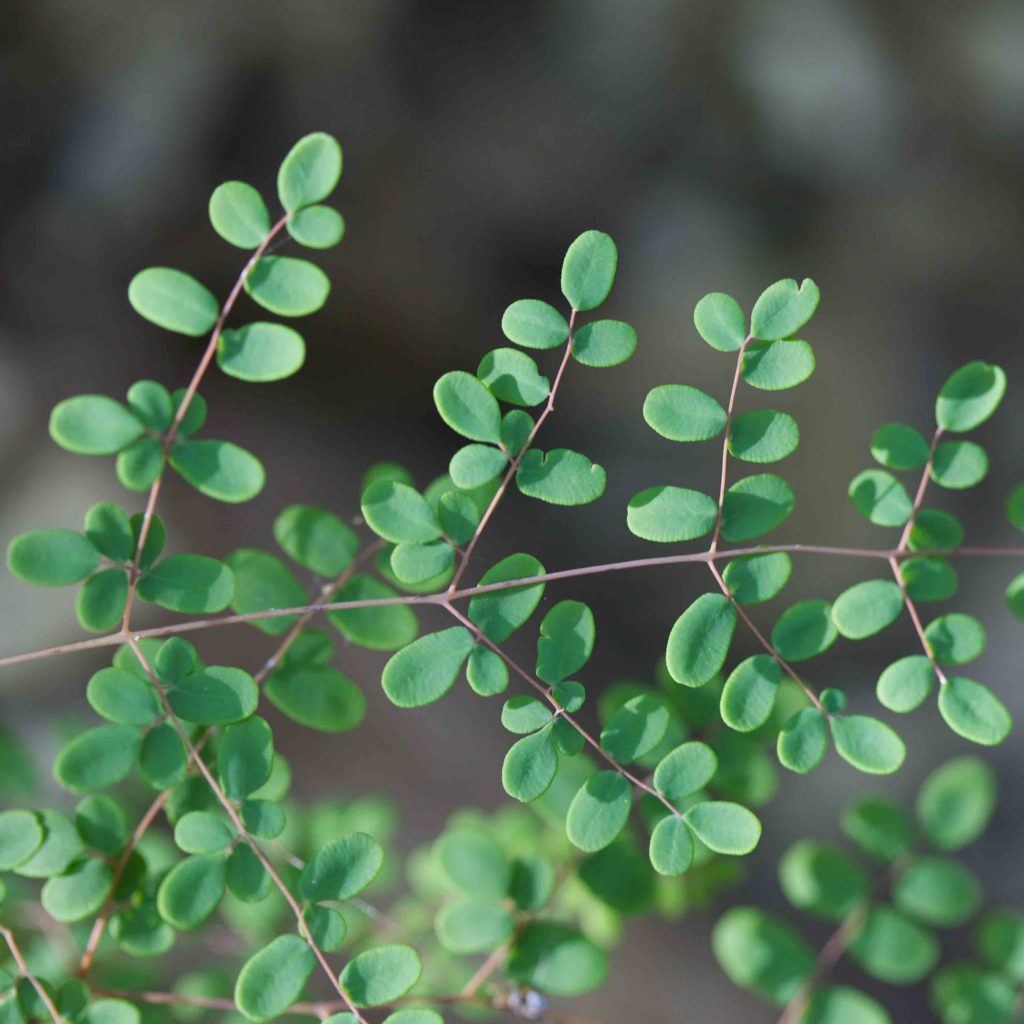 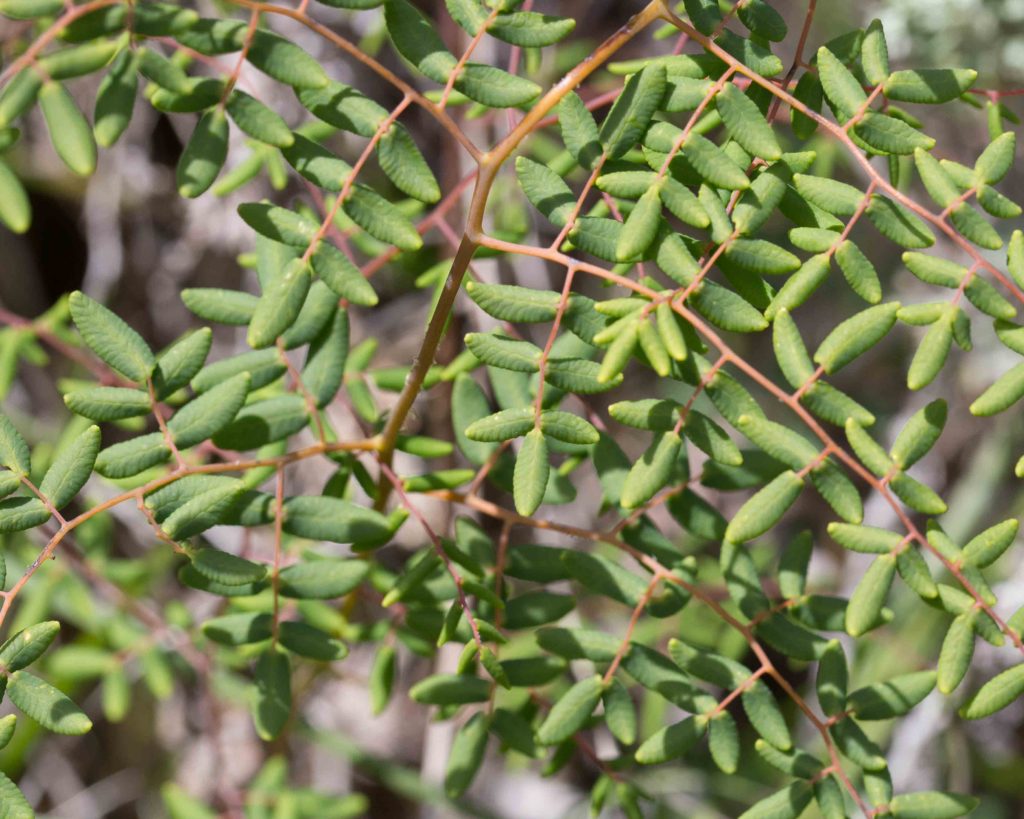 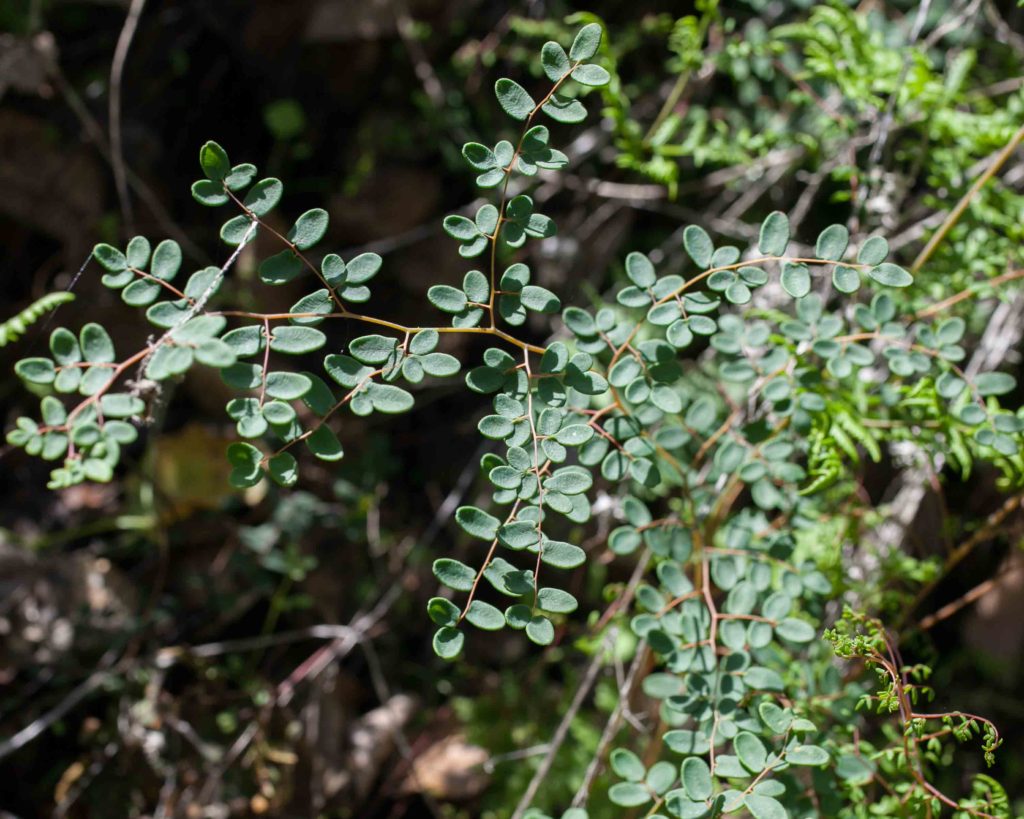 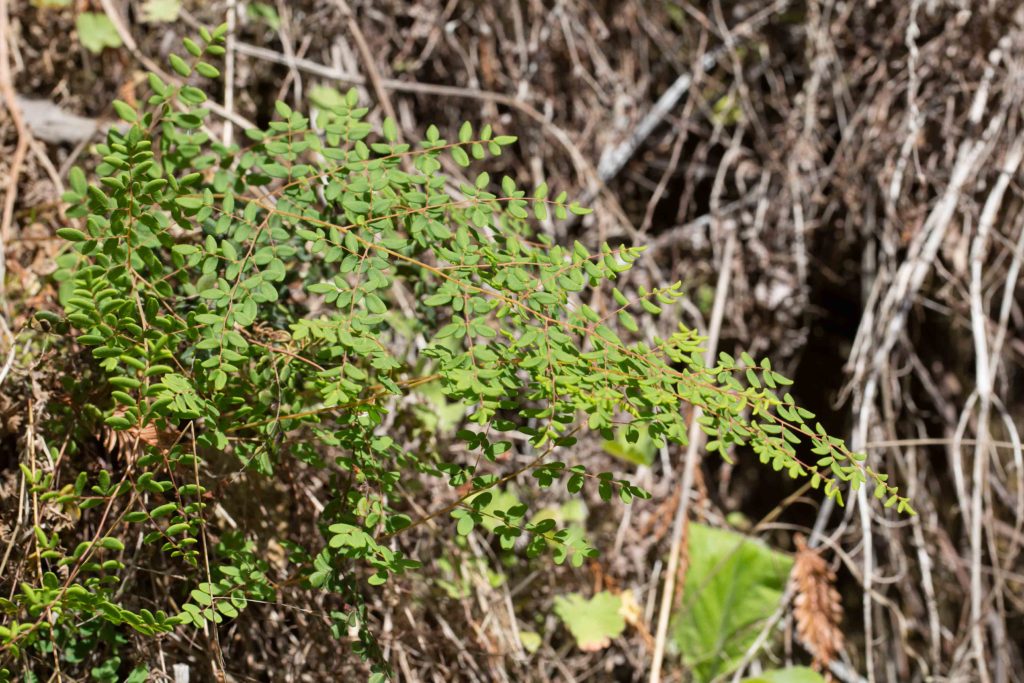 This fern is similar to Coffee Fern (Pellaea andromedifolia, see above), but may have a more erect growth habit.  Its fronds are similar in shape, but the pinnules are narrower, linear to oblong, and with a “mucro” (a short, sharp point) at the tip.  The shape of the leaf and the pointed tip allow the two species to be distinguished with certainty.  This is much less common, found in rocky or dry areas. 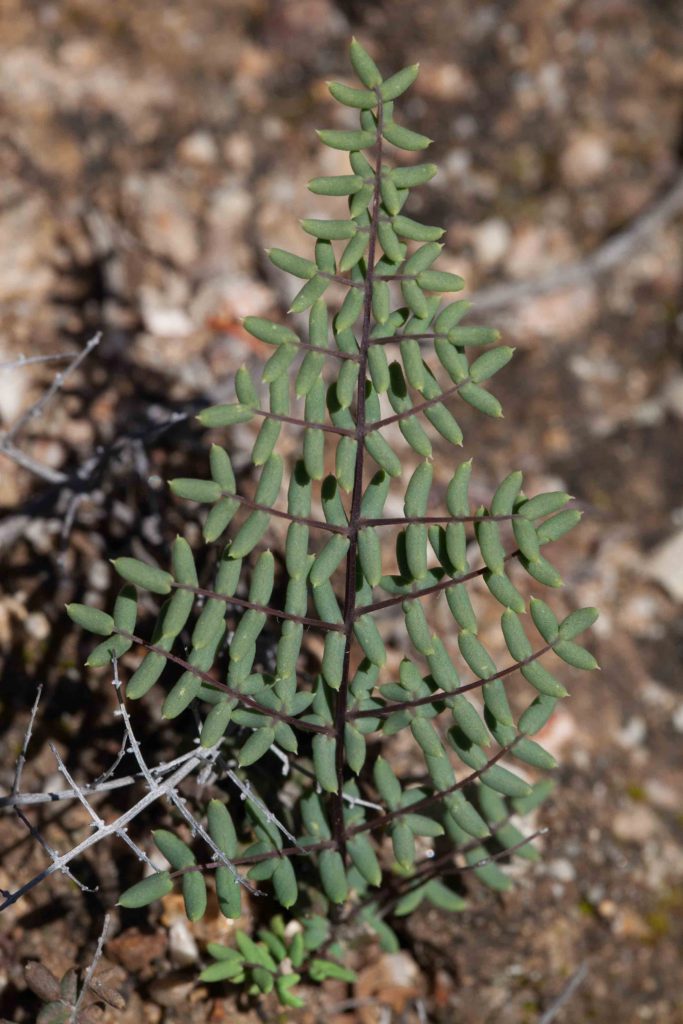 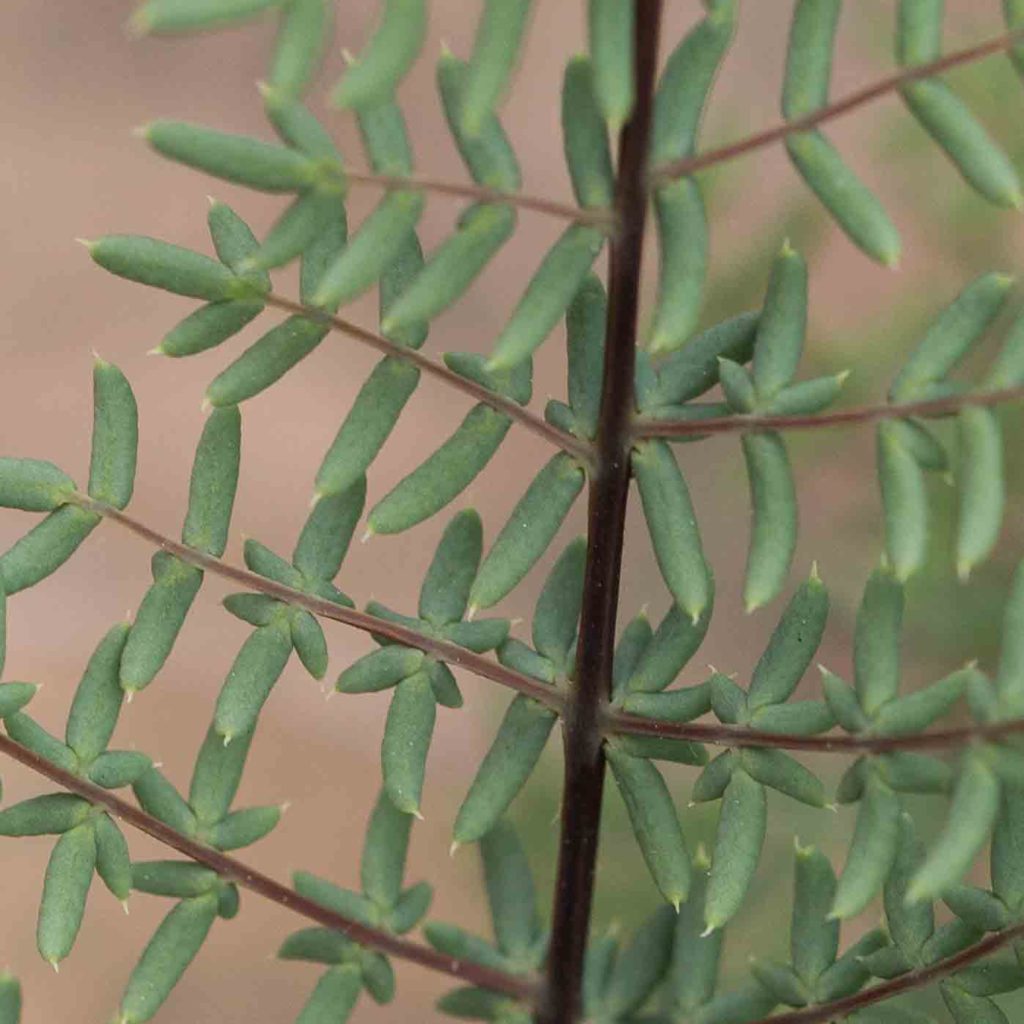 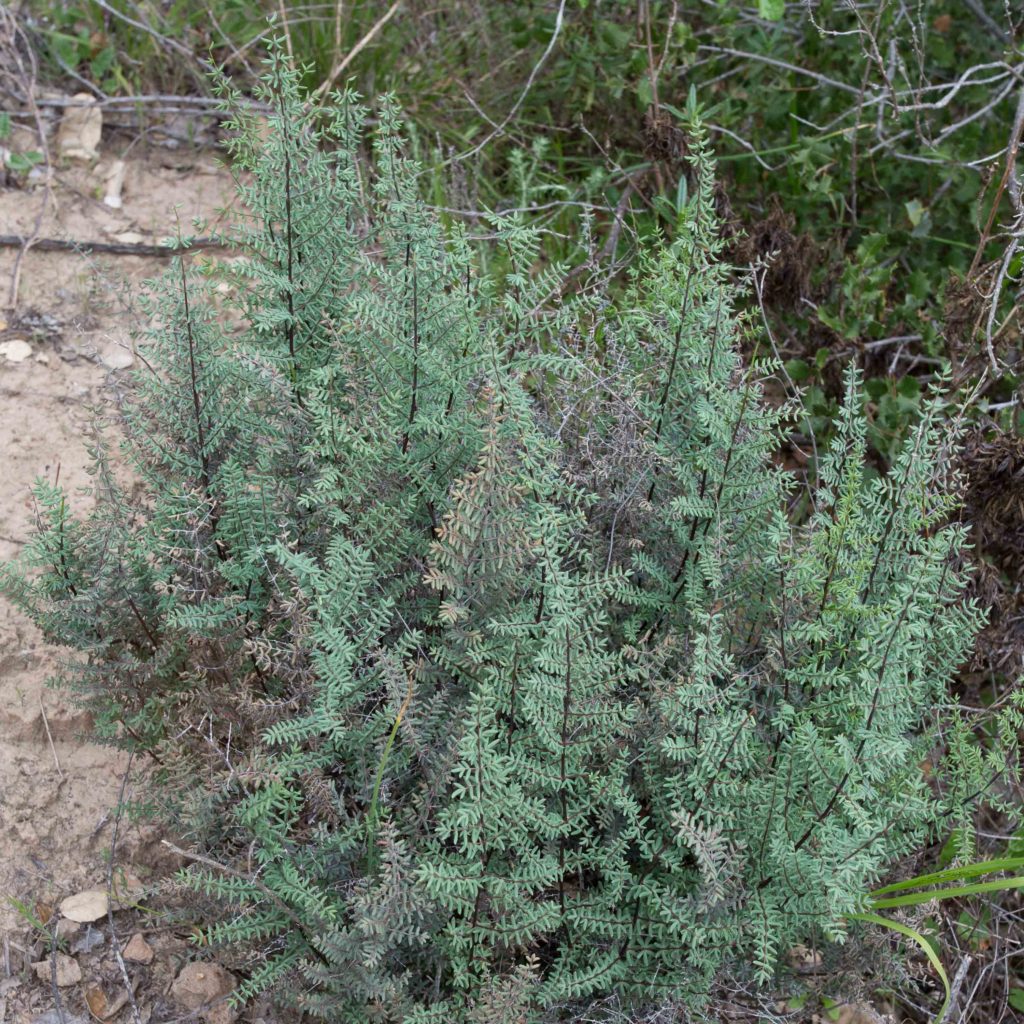 This is a small, common fern with broad triangular fronds.  It has black stems, and a distinctive pair of backward-pointing pinnae at the base of the frond (see photo #1, top).  The underside of the leaves is greenish-gold or silver (photo #3), and covered in a waxy powder (not to be confused with the sporangia).  If pressed against skin or clothing, this powder leaves a clear, yellowish imprint — hence the plant’s alternative common name of “tattoo fern”.  In summer or drought, the pinnules shrink into little ball-shaped structures, often still gold on the outside (see last picture). 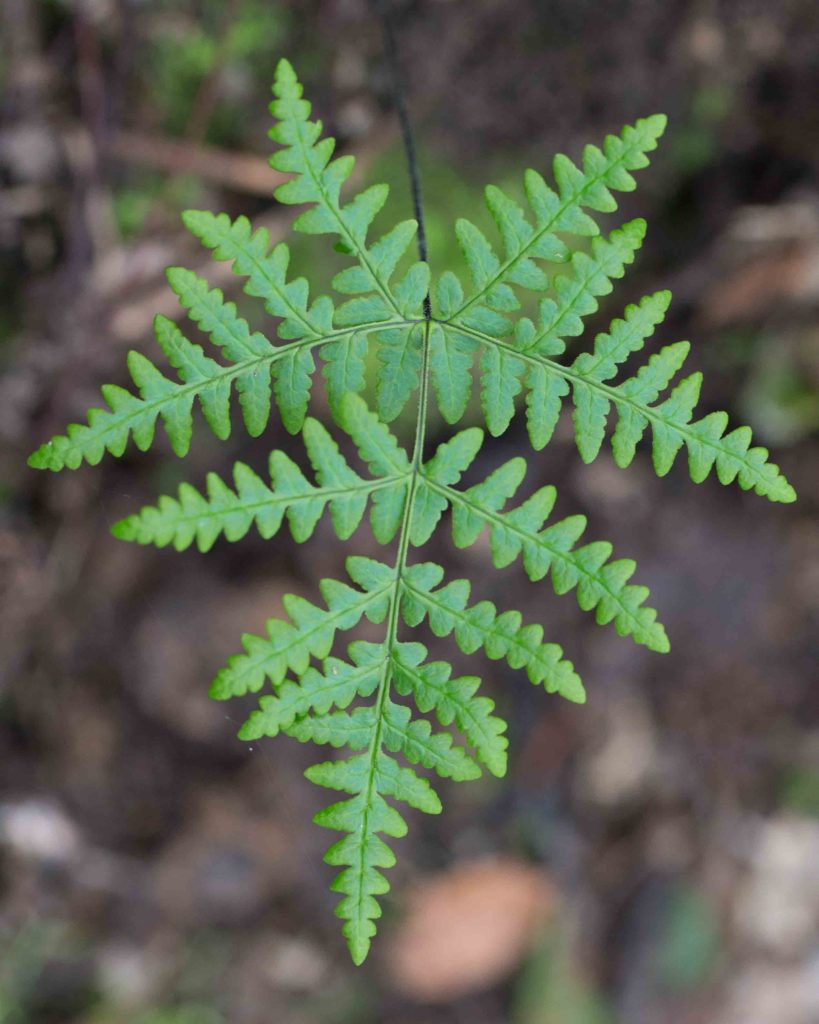 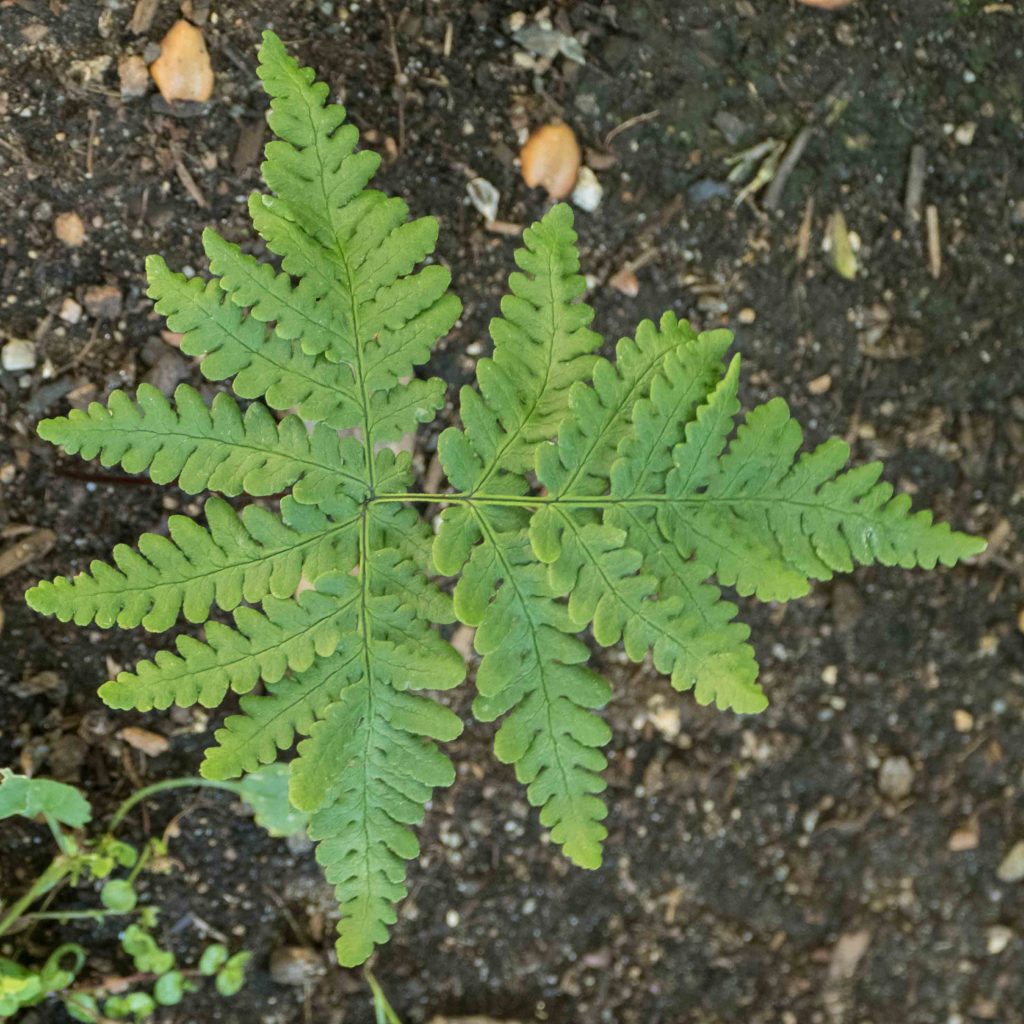 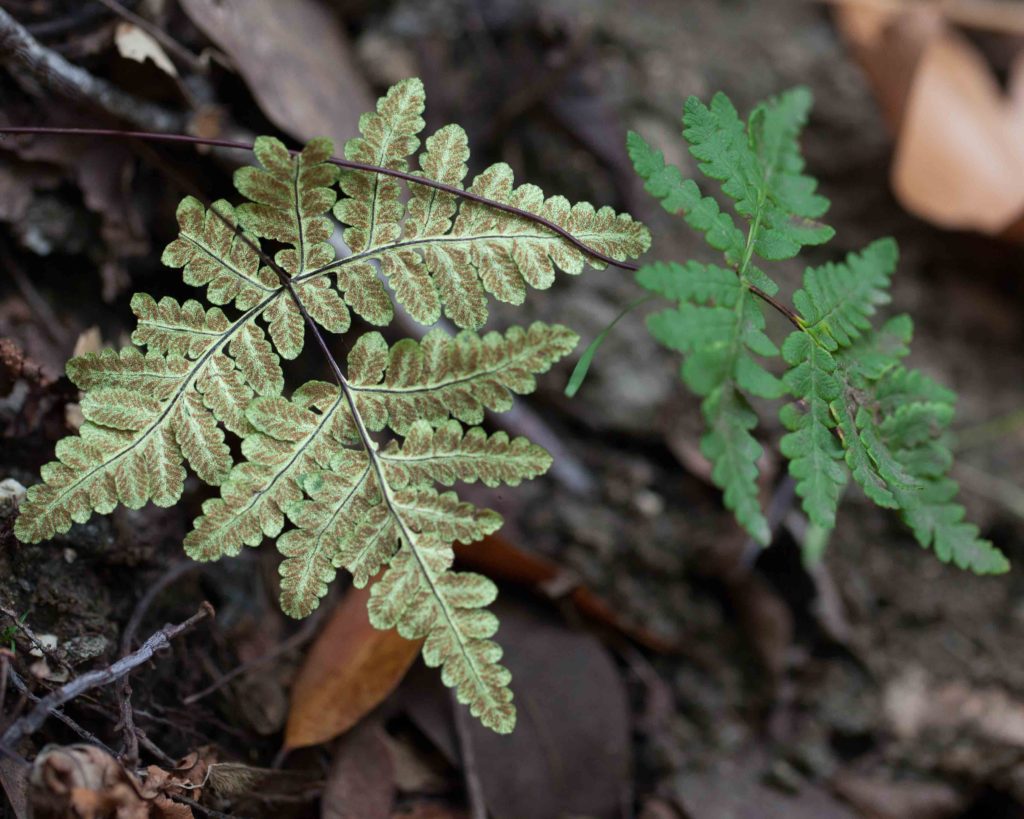 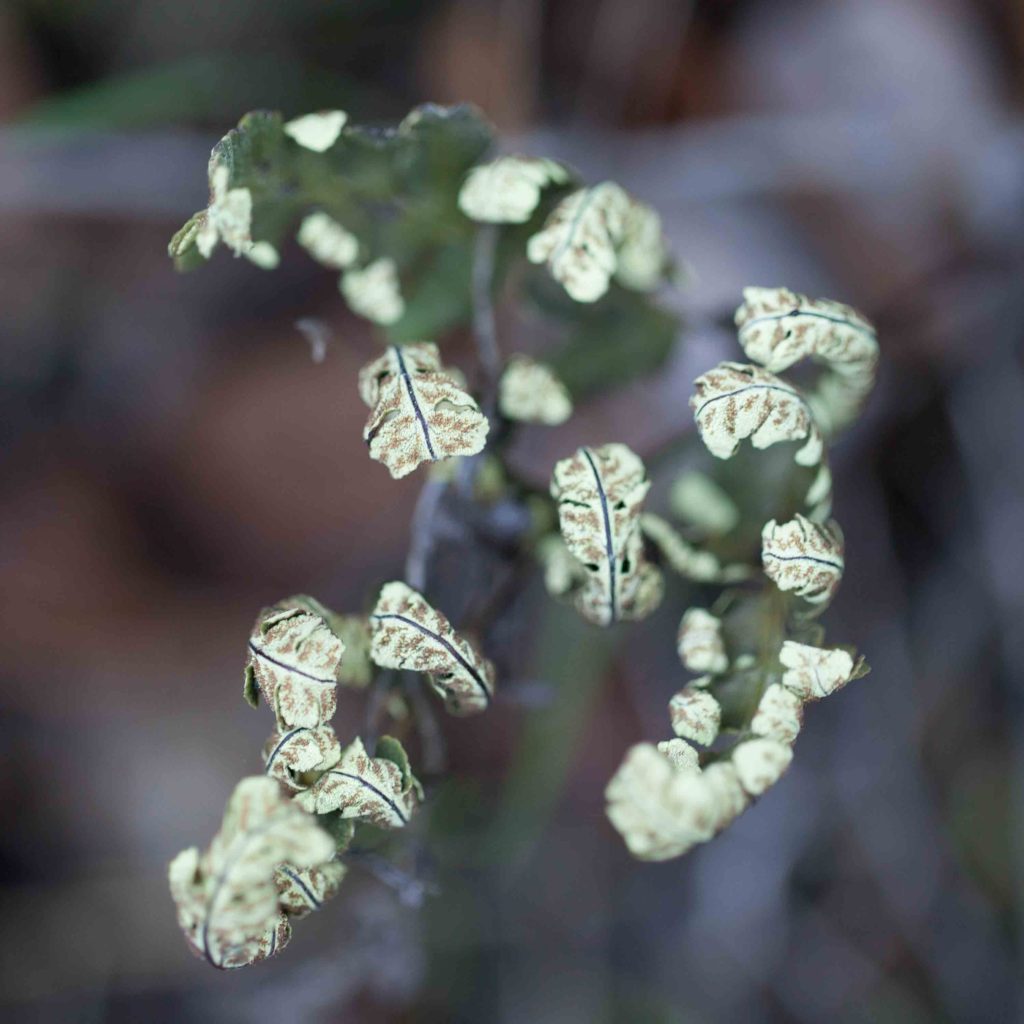 Polypodies are all deciduous ferns, appearing shortly after the winter rains begin, then dying back in summer.  This species is very common in woodlands, on coastal bluffs and rocky ledges.  The fronds are triangular to ovate, often irregular in outline, with the lowest 1–3 pinnae typically longer than the others.  Tips are rounded to acute.  Note the twin rows of sori, more or less sunken (apparent from bumps visible on the upper surface of the pinnae).  The veins are mostly net-like.

Note: Polypodies can be extremely difficult for the layman to distinguish.  In particular, the difference between this polypody and Nested Polypody (Polypodium calirhiza, not shown), which has the lowest 1–3 pinnae pairs generally shorter than those above and sori which are not sunken, is often not clear.  Particular examples may exhibit characteristics of both species. 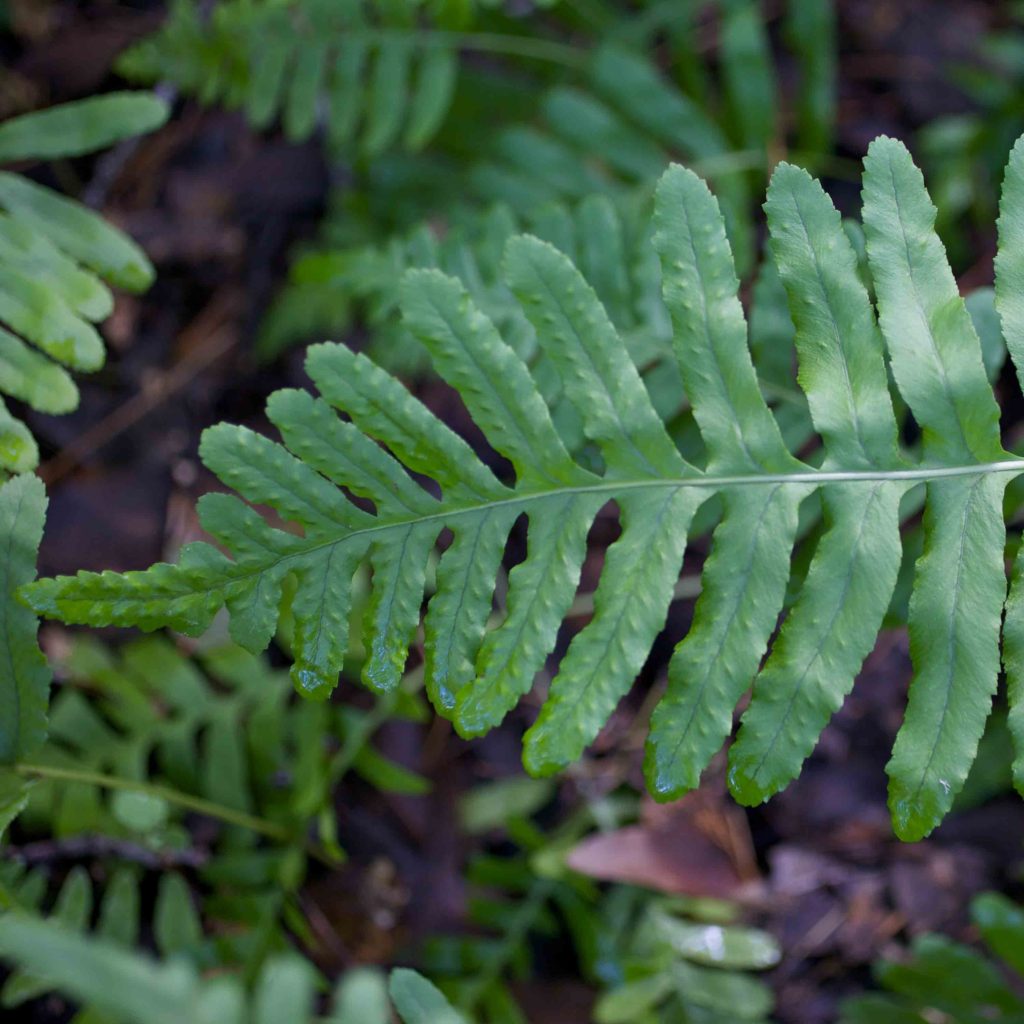 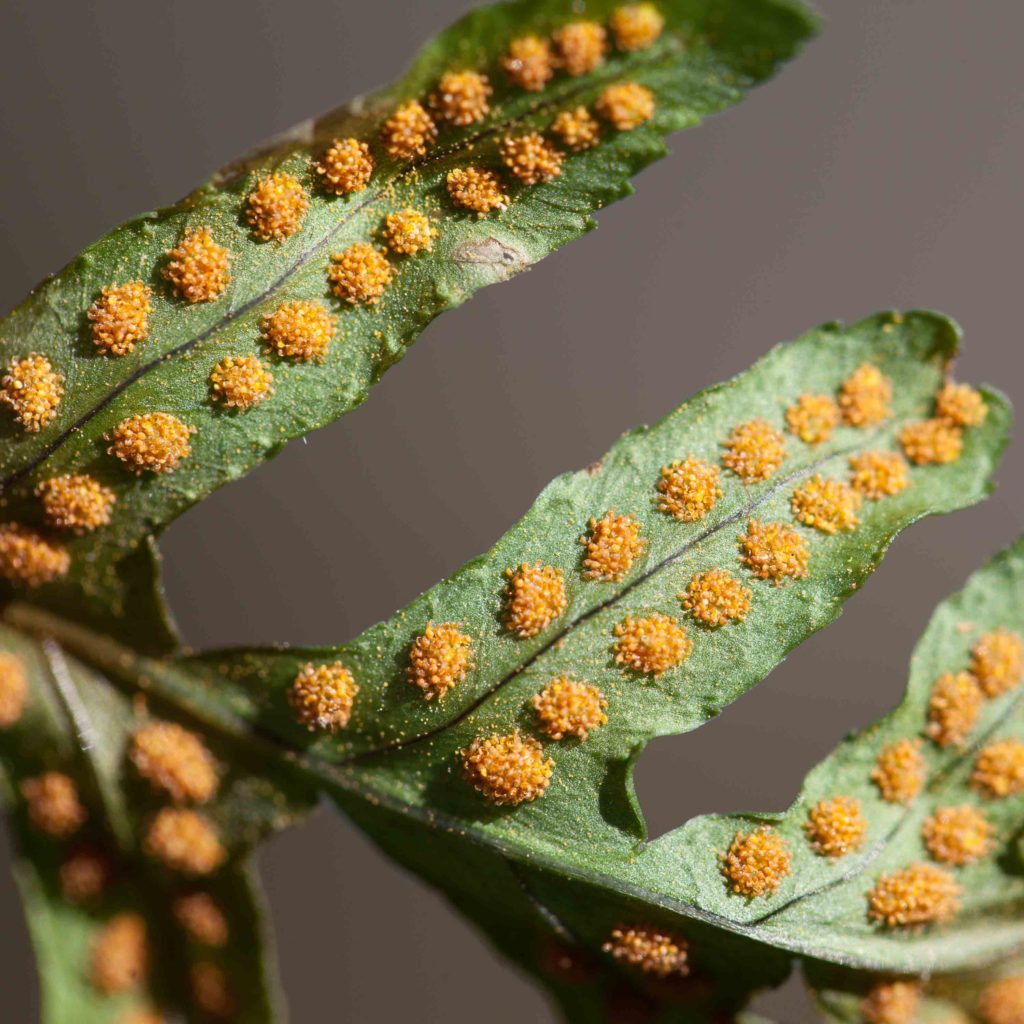 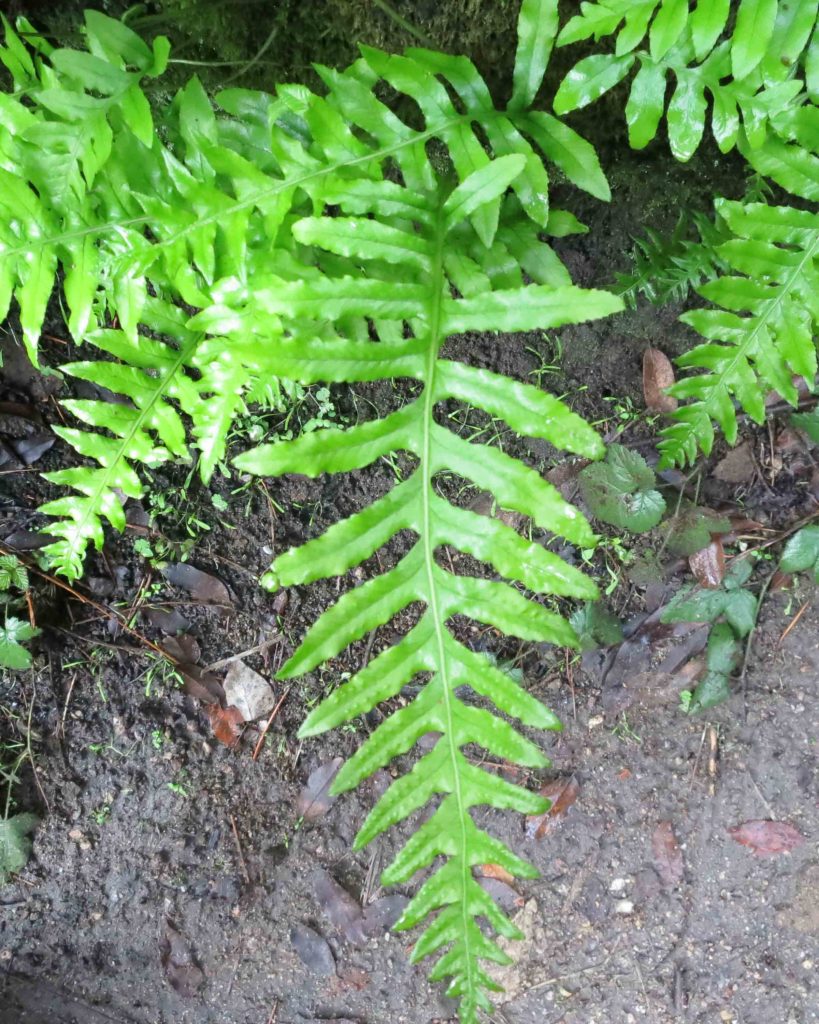 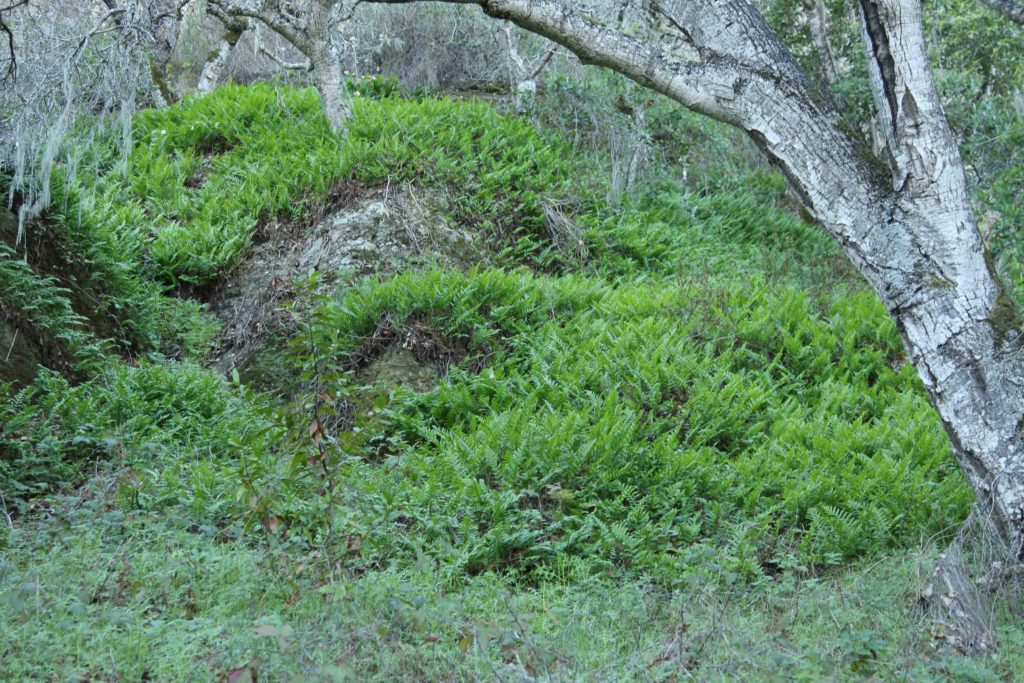 Polypodies are all deciduous ferns, appearing shortly after the winter rains, then dying back in summer.  This species is similar to California Polypody (Polypodium californicum, see above), except for the acute to acuminate tips of the pinnae.  The fronds are lanceolate to lance-ovate, widest at or just below the middle.  It has round, sunken sori.  The veins are all free, i.e. not net-like.  Its name derives from the licorice flavor of the rhizome. 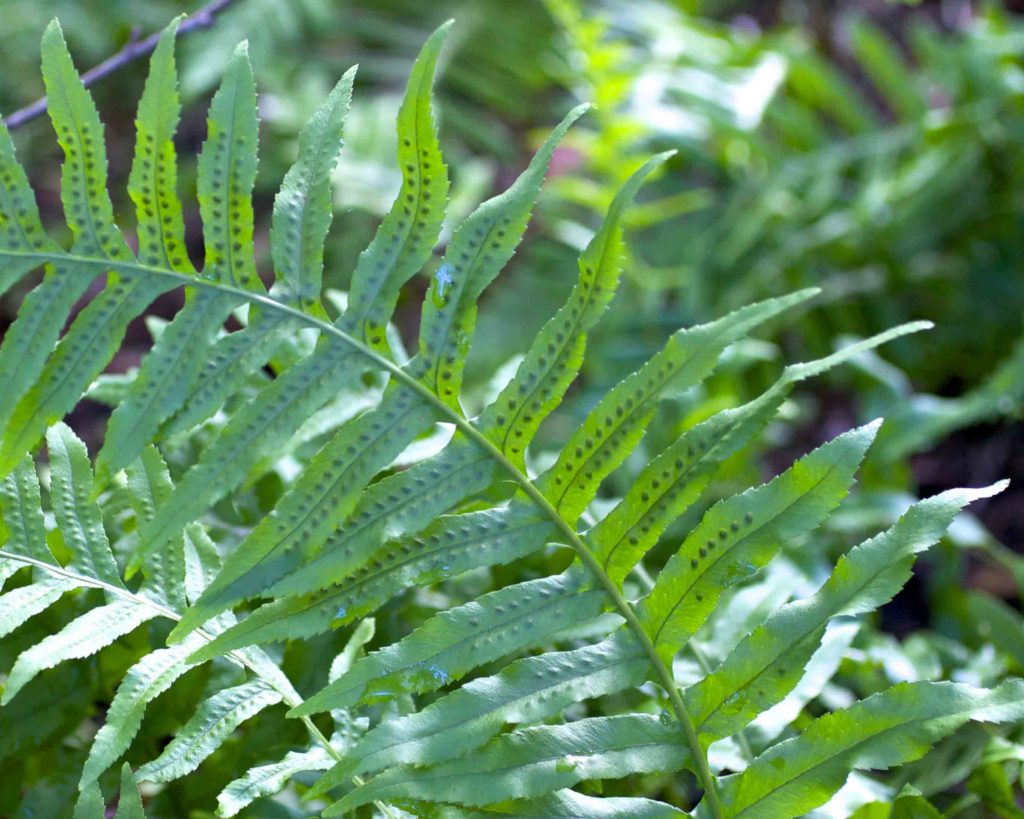 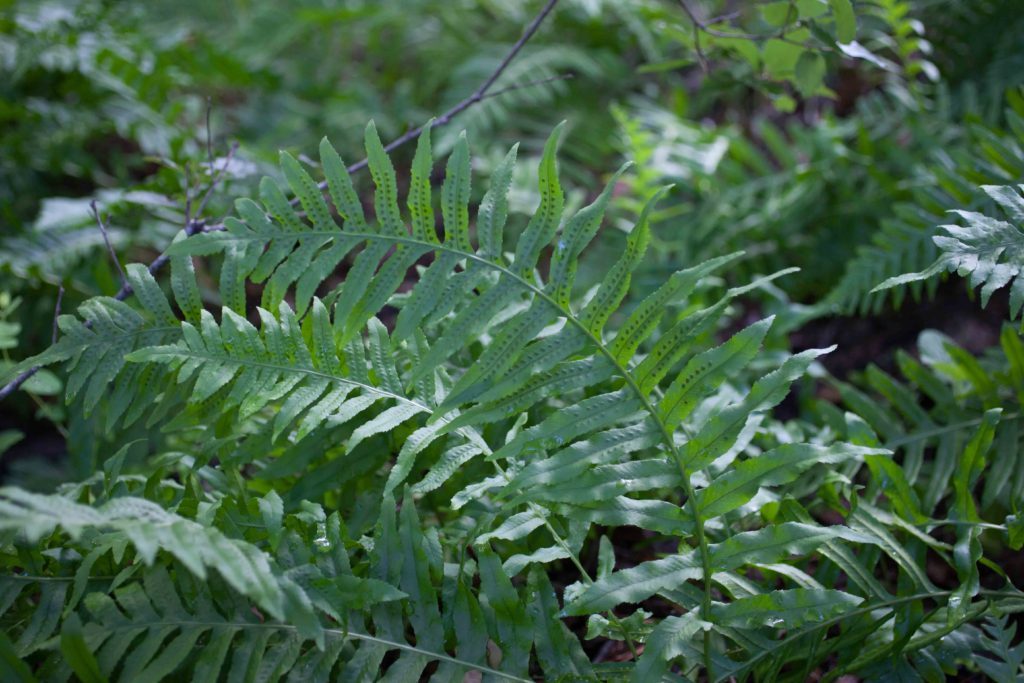 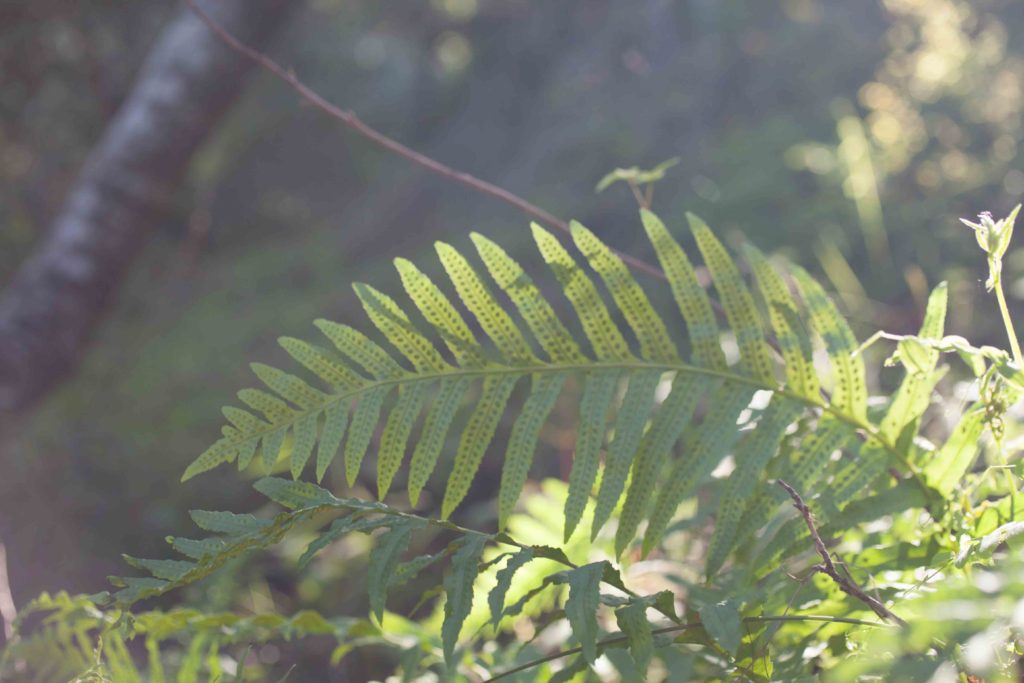